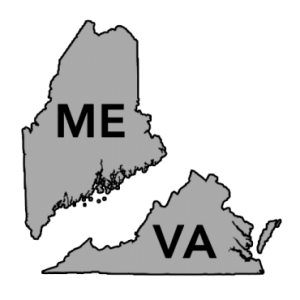 *(OK, Maine is a lock...except that GOP Gov. LePage is apparently still being an utter jackass about implementing it, while Virginia is still kind of iffy...see below...)

Maine voters on Tuesday decided to expand Medicaid to cover more low-income adults, becoming the first state to do so through a referendum.

Support for the ballot measure was up by more than 18 points with 64 percent of precincts reporting about 10 p.m. when it was called by NBC affiliate WCSH and The Associated Press.

The results in Maine, one of 19 states that rejected Medicaid expansion under the Affordable Care Act, comes as other Republican-led states like Utah and Idaho eye similar ballot measures.

Advocates of Medicaid expansion in Maine successfully petitioned the state to include a question on this year’s ballot following several failed legislative efforts to expand the program.

Gov. Paul LePage (R) vetoed five bills passed by the state’s legislature, arguing that it would be disastrous for the state’s economy.

About 80,000 Maine residents living below 133 percent of the federal poverty line will now be eligible for the state’s Medicaid program, according to the state.

As for Virginia, that's not as much of a sure thing, but Medicaid expansion just became a hell of a lot more likely:

In Virginia, Northam didn't just beat Republican Ed Gillespie in the northern Virginia suburbs -- he crushed him. Consider Loudoun County near Washington: Democrats won it by 5 points in the 2013 governor's race, and 20 points on Tuesday.

Democrats were also within striking distance of flipping the 17 seats they needed to take the Virginia House of Delegates -- giving the party much more influence on redistricting in 2020.

It all gives Democrats a huge psychological boost that could help their fundraising and candidate recruitment. It could also accelerate the pace of Republican retirements, as Republican Bob McDonnell's win in the 2009 Virginia governor's race did for Democrats. Already on Tuesday, New Jersey Republican Rep. Frank LoBiondo announced his retirement -- creating another toss-up seat. There could soon be more.

Even if the Dems do manage to flip the state House, I believe the state Senate is still just barely under GOP control for another couple of years (21 to 19), but with a Democratic Governor, Lt. Governor and either a near-even match in both the state House and Senate (and potentially even an outright majority in the House), Medicaid expansion will now be within reach.

Congrats to all who helped make both of these outcomes happen.

Just wanted to remind voters in Maine and Virginia that along with everything else on the ballot this Tuesday, they have the ability to either expand Medicaid to nearly half a million people...or deny them that coverage.

The referendum on Nov. 7 represents a new front in the pitched political battles over health care. Maine is one of 19 states whose Republican governors or legislatures have refused to expand Medicaid under Obamacare, and the other holdouts — particularly Utah and Idaho, where newly formed committees are working to get a Medicaid expansion question on next year’s ballot — are closely watching the initiative, whose outcome may offer clues about the salience of the issue in next year’s midterm congressional elections.

After President Trump and Republicans in Congress spent much of the year trying to repeal the health law and cut spending on Medicaid, a half-century-old entitlement program that covers one in five Americans, the pro-expansion side in Maine is hoping to benefit from energized public support for it.

Turnout may be the biggest challenge for the advocacy groups leading the effort. There are no national or statewide races here to drive people to the polls this year. And Mr. LePage’s stance on government safety net programs appeals to many voters in the state’s more rural regions. He derides Medicaid expansion as “pure welfare” that would burden the state’s taxpayers.

Senator Susan Collins of Maine, one of the few Republicans who firmly opposed the Obamacare repeal bills, is not taking a position on the ballot measure — she never does on referendums, according to her staff. But leaders of the campaign are hoping her outspoken support for Medicaid during the repeal battles will help.

About 80,000 additional Mainers would become eligible for the program if the ballot measure were to succeed, according to the nonpartisan Maine Office of Program and Fiscal Review, although those with income above the poverty line currently qualify for subsidized coverage through the Obamacare marketplace. In all, more than 2.5 million poor uninsured adults across the country would gain access to Medicaid if the holdout states expanded the program, joining about 11 million who have already signed up under the law.

According to CMS, 79,407 Maine residents selected QHPs during the 2017 Open Enrollment Period, of whom 21,084 have incomes between 100-150% of the Federal Poverty Line. Since Medicaid expansion runs up to 138% FPL, that means that assuming a fairly even income distribution, around 16,000 of them would likely be shifted over to Medicaid if Maine votes to expand the program on Tuesday. The remaining 64,000 should be adults without children under 18 earning less than 100% FPL.

This means that if the state expands the program, their ACA exchange enrollment would likely drop by around 20%...which should actually help the individual market risk pool, since lower-income folks tend to have worse health conditions.

The Virginia elections will decide if 400,000 people get health care

...If Virginia had expanded Medicaid, Harris and about 400,000 other Virginians would have health insurance. But it didn’t, and Harris, who makes about $25,000 per year — or too much to qualify for Medicaid in the state — is scrambling to get all the medical care she can now for her high blood pressure, long-overdue trips to the dentist, and pain in her knees.

“I’m getting all the treatment I can right now,” Harris, 53, said at a Starbucks in Fredericksburg. “The dentist wanted to give me a temporary filling and to come back in two months, but I can’t do that; I won’t have dental then.”

Most of the national attention on the November 7 election is about the battle between Republican Ed Gillespie and Lt. Gov. Ralph Northam, a Democrat, for the governor’s mansion.

But for voters in the state, there are some bigger policy stakes on the ballot: If enough Democrats get elected to the legislature, they can expand Medicaid under the Affordable Care Act. Whether Democrats can regain the statehouse, redraw Virginia’s congressional districts, and fulfill one of Obamacare’s promises will depend on dozens of below-the-radar statehouse races. And despite a surge in interest from previous years, it’s still not clear Democrats on the ground have the resources to win.

...Virginia is looking like an increasingly blue state. Barack Obama won it twice, Hillary Clinton cruised to a 5-point victory, and it has two Democratic senators.

And yet its health care system much more closely resembles that of Republican-controlled states in the Deep South.

That’s been disappointing for many in the state, particularly those who hover just above the cutoff for Medicaid. Dorren Brown, the director of a free clinic in Virginia’s Orange County, in one of the poorer sections of the state, remembers crying with joy when she learned that Obamacare would be signed into law.

“We were really hoping our patients were going to qualify and get insurance or Medicaid,” said Brown, 63. “We thought it would lighten our load and get our patients the health care they need.”

Again, according to CMS, 410,726 Virginians selected QHPs, of whom 143,760 earn between 100-150% FPL. Assuming even distribution, around 110,000 of them would be shifted to Medicaid, plus another 290,000 or so adults earning less than 100% FPL. Nearly 27% of Virginia's likely-more-expensive enrollees would drop off the exchange which again should help the individual market risk pool.

Assuming similar total exchange enrollment to 2017 (around 12.2 million, which is pretty unlikely due to the massive sabotage and confusion this time around), this means roughly 126,000 exchange enrollees, or about 1% of the national total, would be moved to Medicaid instead. And while I generally push for as many people to enroll in ACA exchange policies as possible, this is an obvious exception to that rule. Not only would both state expanding Medicaid improve the risk pool for everyone else on exchange plans, it would also lower the national uninsured rate by around 354,000 people, or more than a tenth of a percent all by itself.