UPDATE: Where Things Stand As Of Today: 5.9 million QHPs confirmed nationally & much more

OK, today saw two major 2018 Open Enrollment Period data updates out of HealthCare.Gov and Covered California, plus a minor one out of Maryland.

As I reported this morning, the HC.gov Week 5 Snapshot report came in much lower than I expected this week, at just 823K vs. the 1.2 million I was anticipating; as a result, the HC.gov section of The Graph (in green below) has finally reverted back to my original projection line with a total of 3.6 million as of December 2nd. If it follows my trendline this week, HC.gov should tack on another 1.2 million for a total of 4.8 million by Saturday night, December 9th, ahead of what should be the Big Final Week Surge.

Then, about half an hour ago, Covered California issued THEIR big enrollment press release: Around 1.2 million renewals (active + passive combined), plus 102,000 new enrollees, as of November 30th.

Finally, while I had already updated Maryland with some rough numbers yesterday, they provided me with the exact data, as of December 3rd: Just shy of 140,000 QHP selections (auto-renewals included).

UPDATE 12/7/17: Big update out of Massachusetts today: ~260,000 QHPs total thru 12/06, including auto-renewals. All numbers/graphs below have been updated to reflect this.

UPDATE 12/7/17: First enrollment update out of the District of Columbia: 18.7K QHPs total thru 12/05, including auto-renewals; All numbers/graphs below updated.

With all of these plugged into The Graph, I've now confirmed 5.58 million 5.9 million QHP selections nationally through December 6th: 3.6 million via HC.gov and another 2.0 million 2.2 million in the 12 State-Based Marketplaces (SBMs).

At this point I'm expecting total national enrollments to hit around 6.9 million7.2 million by Saturday night (4.8M via HC.gov + 2.1 million 2.4 million via the 12 SBMs). After that...well, it's mostly about the Surge Week and the HC.gov Auto-Renewals.

What about auto-renewals vs. active renewals? Well, the data for the 12 SBMs has way too many holes, but last year on HC.gov, 4.56 million people actively renewed, 1.63 million were auto-renewed and 3.01 million were newly enrolled.

Of course, the actual mix doesn't have to be exactly that; if more people actively re-enroll, there'd be fewer left to auto-renew anyway, and so on. Still, this gives some type of guideline.

As for the state exchanges, they'll need another 1 million 800K enrollments total beyond those I've already confirmed, although there's no way of matching up the dates, active renewals, auto-renewals and new enrollments to the numbers I have on hand. Remember that 9 of these states have deadlines beyond the official 12/15 one, and three of them (CA, DC & NY) are keeping to the prior January 31st deadline.

Here's how many people enrolled after December 15th last year in the 9 states which have extended deadlines during the additional timeframes each has this year:

Add them up and that's around 207,000 more people enrolled in those 9 states after the mid-December deadline...and the tail-end "mini-spike" isn't included for the first six states listed, which is why I'm projecting around 300,000 more enrolling between 12/15 and 1/31 across all of them. 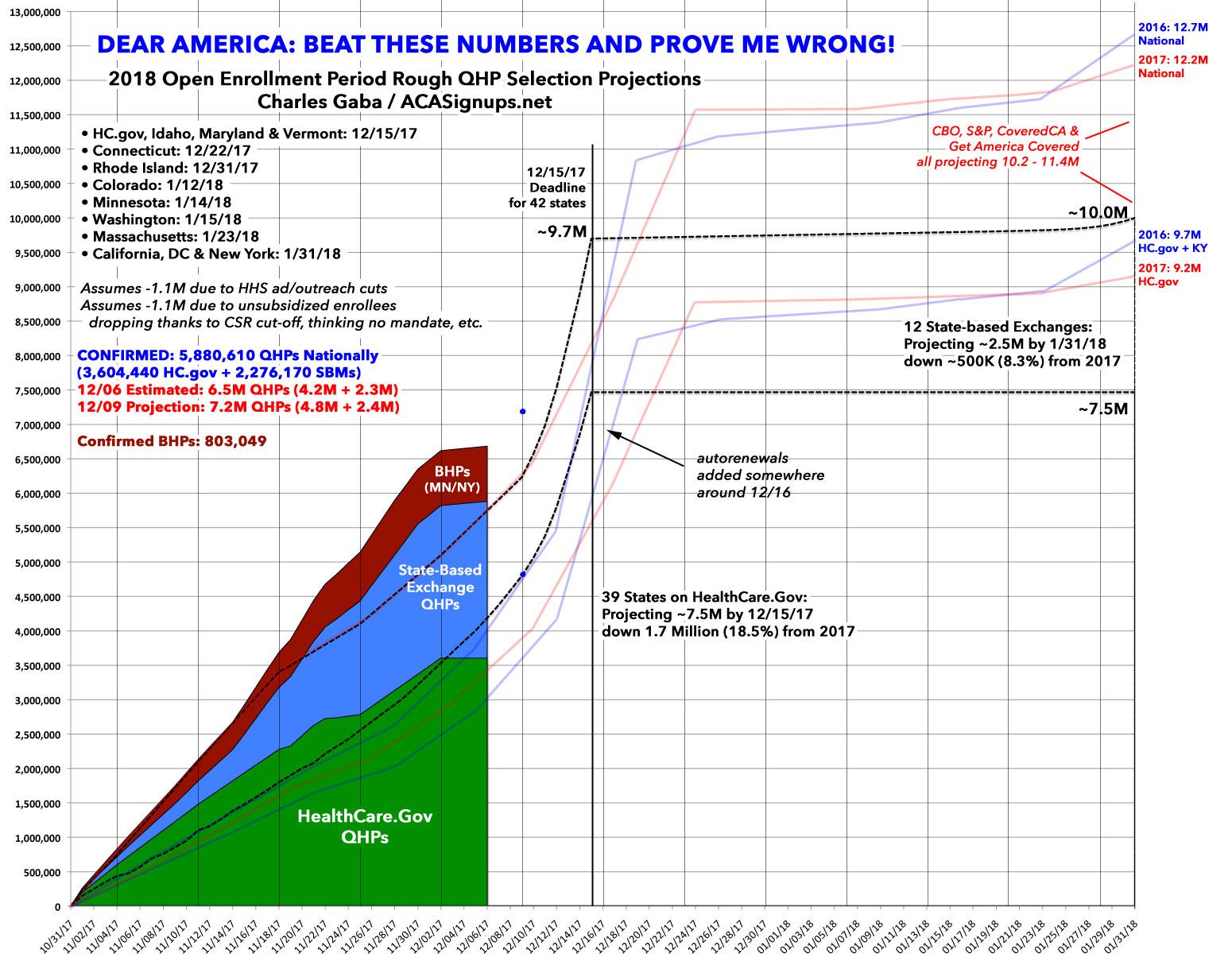 Next, while I already ran a year over year comparison table for the 39 HC.gov states this morning, I've gone ahead and plugged in as much of the confirmed 2018 data as I have for the 12 state-based exchanges. There's a few important caveats to note:

Overall, nationally, enrollments as of about 4 days ago are running roughly 16% ahead of the same point last year, with deep red states Mississippi and Wyoming in the lead on a percentage basis (up more than 43% each). At the opposite extreme, 4 states + DC are running behind last year so far, although California, Idaho and DC are missing 3 days of data while West Virginia and Vermont is only missing one. This may not seem like much, but as enrollments ramp up towards the 12/15 deadline, even a single day can make a big difference, so WV & VT are the only state which can really be considered to be noticably lagging behind last year. 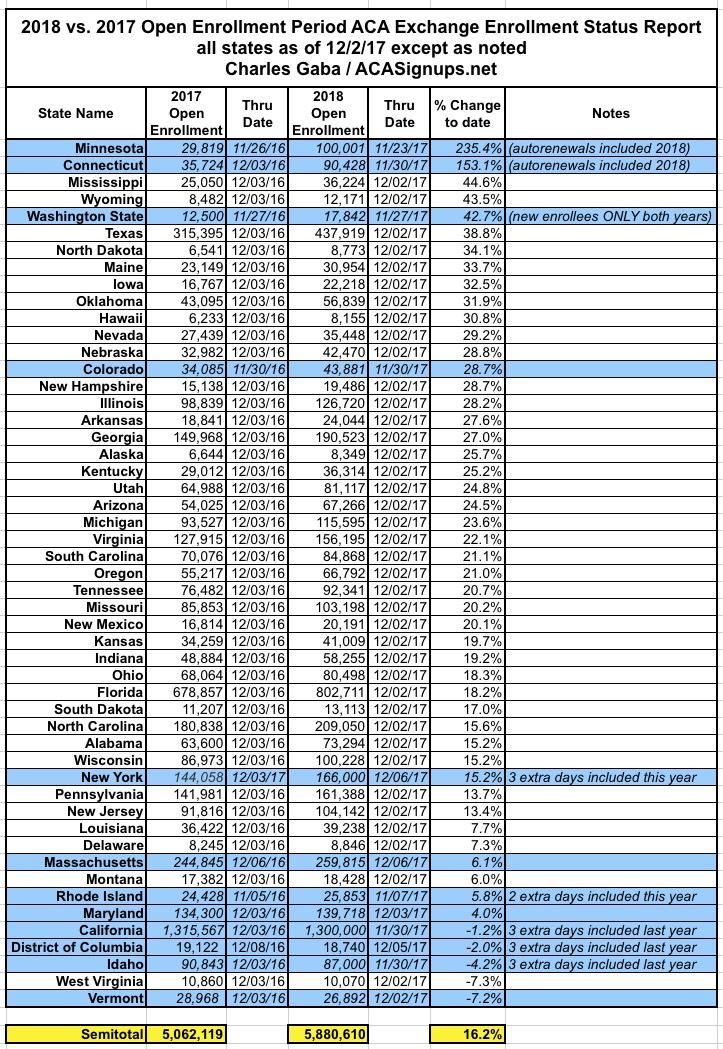 Finally, let's take a look at how enrollments are going compared to last year's total number. Again, I've sorted the states from highest to lowest based on what portion of 2017's total it's reached so far. Not surprisingly, the states which "front-load" auto-renewals before 12/15 are the closest to their 2017 tallies. At the opposite end are state-based exchanges which have special circumstances--no data at all (VT/DC), new enrollments only (WA) or limited data (MA, which I only have 15 days of enrollment data for so far). 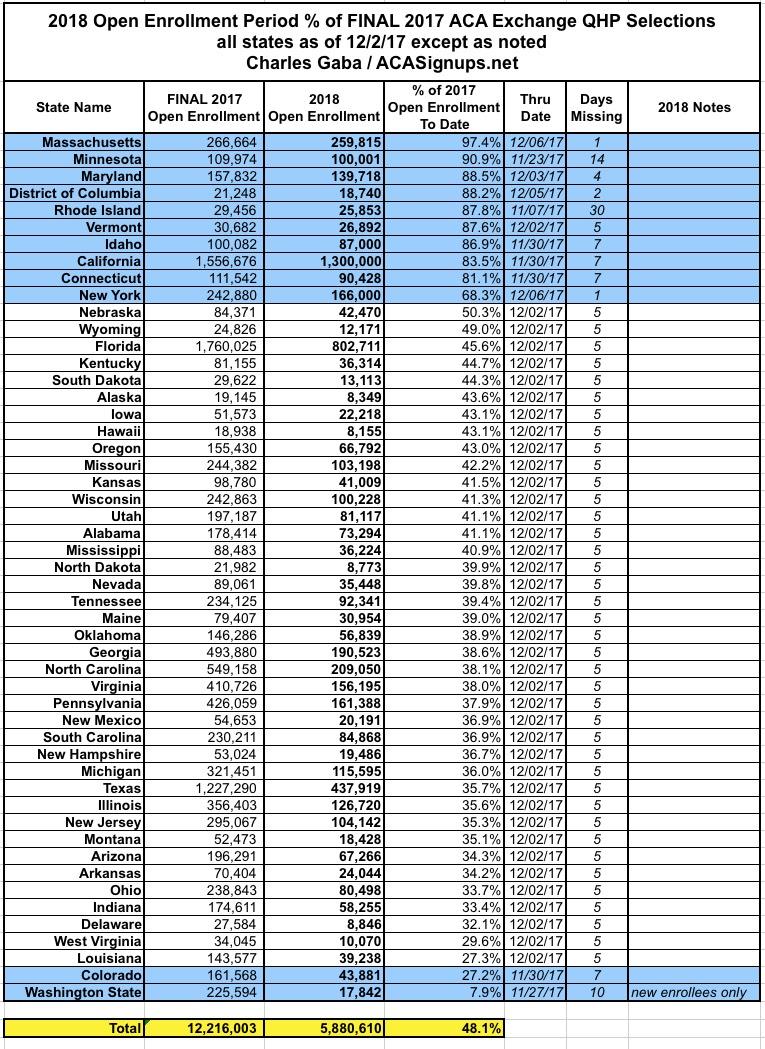