Working on this so check back frequently for updates...

In week one of Open Enrollment for 2018, 601,462 people selected plans using the HealthCare.gov platform. As in past years, enrollment weeks are measured Sunday through Saturday. Consequently, week one was only four days long this year - from Wednesday to Saturday.

Every week during Open Enrollment, the Centers for Medicare and Medicaid Services (CMS) will release enrollment snapshots for the HealthCare.gov platform, which is used by the Federally-facilitated Exchanges, the State Partnership Exchanges, and some State-based Exchanges. These snapshots provide point-in-time estimates of weekly plan selections, call center activity, and visits to HealthCare.gov or CuidadoDeSalud.gov.

OK. First of all, the 4-day week thing makes running year over year comparisons tricky...especially since last year HC.gov actually only released data every two weeks (they went weekly in 2015 and 2016). However, I can say that my own model assumed around 380,000 QHP selections via the federal exchange in the first 4 days...which this just blew away by 58%.

Here's the best comparison I can make: Last year HC.gov enrolled 1,008,216 people in the first 12 days. Again, without the 4-day number from last year I can't give a direct comparison, but it sure sounds like they're on track to beat that number easily. I modeled around 1.16 million after 12 days; I'd now figure this year to be 1.3 million or more.

UPDATE: OK, strike that; it turns out that CMS did release weekly data last year...well after Open Enrollment ended. According to the Public Use File (PUF), in the first 5 days of November 2016, 415,512 people selected QHPs via HealthCare.Gov.

Also worth noting: Of those 1.0M who enrolled iin the first 12 days last year, 24.4% were new enrollees. It's down a bit to 22.8% in the first 4 days this year, but again, it's hard to draw any conclusions due to the 4 vs. 12 day gap. Plus, of course, the ratio would naturally skew more towards renewals most subsequent if there's more people enrolled to begin with.

Assuming around 8.8 million 2017 enrollees are still effectuated by the end of December, I expect perhaps 8.0 million of them to re-enroll for 2018. That's the relatively easy part. The other question is how many new enrollees can be expected to sign on; in the first 4 days, 137,000 did so via HC.gov, which likely translates into perhaps 180,000 nationally so far, I would think.

The second weekly snapshot report for this season should include the first 11 days of Open Enrollment; that will be a much closer apples to apples comparison vs. last year.

This also means that I've now cofirmed a total of at least 654,000 QHP selections nationally in the first few days when you include the 6 additional state-based exchanges which have also reported early data (the other 6 haven't reported anything yet). It's important to remember that the other 54,000 only include 6 states, but also mostly only include a single day (Nov. 1st), so the actual national total through the first 4 days is probably closer to 700,000 or so.

OK, so what does this tell us? Well, first of all, it says that the efforts of grassroots organizations like Get America Covered, the Indivisible ACA Signup Project and so forth have done a fantastic job of getting the word out in spite of the Trump Administration's attempts to sabotage the advertising/outreach campaigns...at least in terms of the launch of Open Enrollment.

It's also possible, as I've noted before, that Trump's attempts to declare the ACA "dead" may have backfired: He keeps flapping his gums so much about it that this has also kept the ACA in the news constantly, reminding people that "oh, yeah..."

So who doesn't deserve A SINGLE BIT OF CREDIT? Donald J. Trump. These numbers are, among other things, hundreds of thousands of people giving him the collective finger.

The bigger question is whether this pace tapers off/flatlines going forward. Remember, most of the people signing up right now are current enrollees renewing their policies; It's possible that all which is happening is more front-loading instead of back-loading. And of course, activists like me have been urging people to actively shop around as opposed to allowing themselves to be passively auto-renewed.

Assuming people are taking that advice, this means that instead of 3 million or so auto-renewals being tacked onto the total in mid-December, those same 3 million may very well be actively choosing a plan earlier in the enrollment period. If that's the case, it's still a good thing...but it wouldn't have any impact on the final totals, which could still end up flatlining at around 10 million.

HOWEVER, all that being said, this is still a fantastic start to an enrollment period which just about everyone (including myself) assumed would be a bit of a dud. Kudos all around, folks. 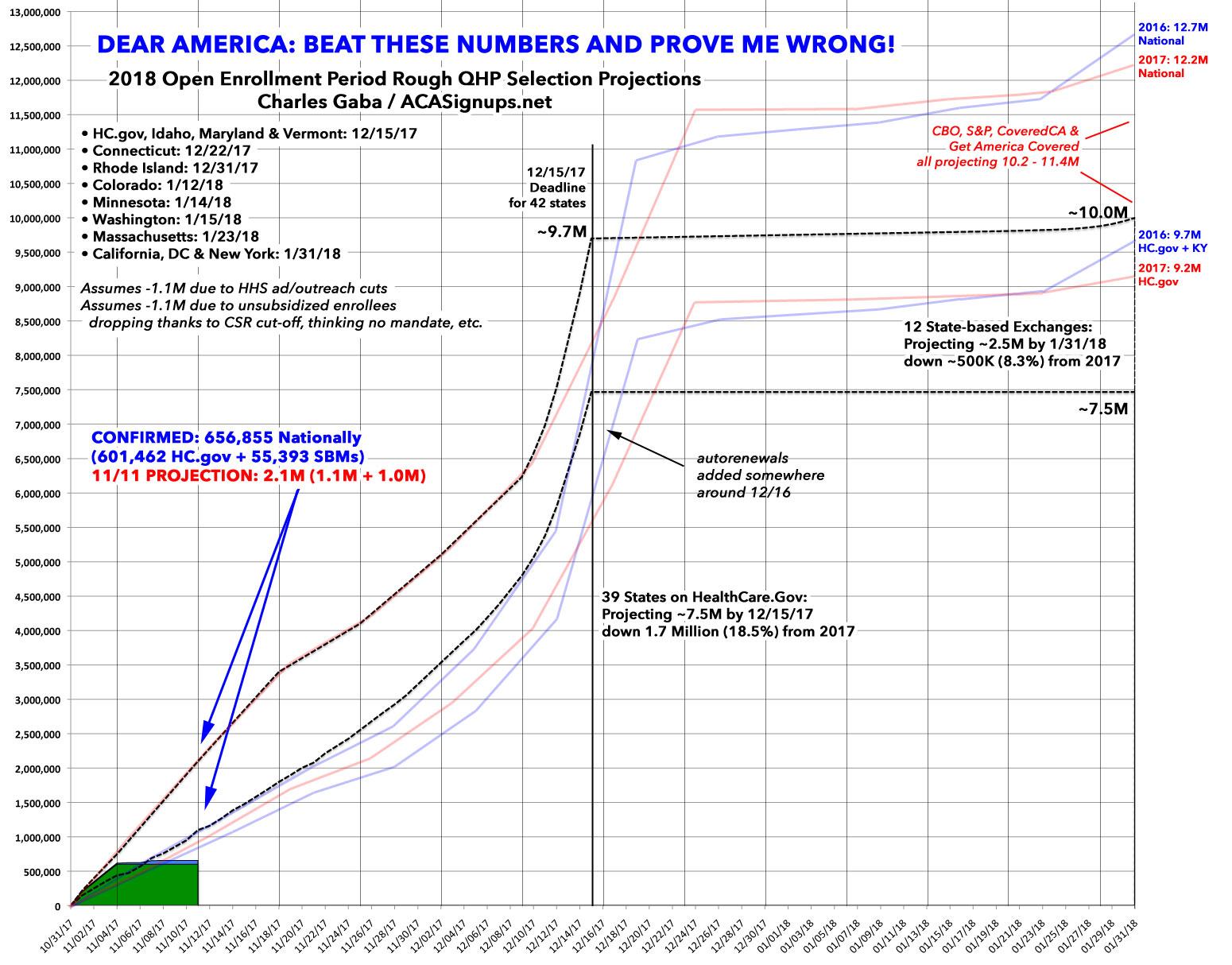