I had previously calculated the overall CSR load impact here in Michigan at around 10.1 points, so that's roughly 16.7% overall if there wasn't any CSR load to contend with.

Meanwhile, the situation is a bit worse in Washington State:

The president's decision increased rates by 10 percent on average in Washington state.

"I'm very disheartened to have to approve these rates," said Insurance Commissioner Mike Kreidler. "For months, we've struggled with the ongoing uncertainty at the federal level and have shared our concerns with our Congressional delegation and with the president's administration. I warned of the harm their actions could inflict on real people and their families. The president's decision to stop making cost-sharing subsidy payments and weakening the enforcement of the individual mandate to buy health insurance are behind the surge in premiums we're seeing this year. The other major cost driver is the skyrocketing costs of prescription drugs -- something the administration promised to tackle, yet has failed to take on."

Previously it looked like Washington's final rates would be more like 24% without the CSR load or 33% with it; instead, it appears to be 26.4% and 36.4% respectively (the table below shows that "by 10 percent" wasn't a rough estimate...it's exactly that much).

See insurers and their rates by county

Consumers who select a silver-level plan inside the Washington Health Benefit Exchange (Exchange) will see an additional rate increase due to the end of cost-sharing reduction funding. However, they will still receive cost-sharing assistance if they income qualify, and any rate increase would be mitigated if they qualify for these subsidies or Advanced Premium Tax Credits (APTCs). People who select a silver plan and do not qualify for subsidies will be hit the hardest by the president's decision.

Earlier this year, Kreidler instructed insurers to file two sets of rates for silver-level plans - one assuming the federal government would continue funding cost-sharing reduction subsidies and one, if the funding stopped. Both sets of rates were approved. When President Trump issued his Executive Order, insurers were allowed to switch to the higher set of rates. If Congress restores the funding at any time in 2018, insurers must revert to the lower set of rates and consumers will be notified.

Silver plans sold only outside the Exchange, as well as bronze and gold plans, have rate changes but are not impacted by the president's action.

Besides confirming WA's "Silver Switcharoo" status, also note the clarifier regarding how WA intends to handle things if CSRs are restored next year.

In addition to the president's actions on cost-sharing reduction subsidies and the weakened enforcement of the individual mandate, other major factors behind this year's rate increases include the increased costs of both medical services and prescription drugs, as well as the reinstatement of the federal health insurance providers tax. Under the Affordable Care Act, insurers are required to pay a tax to help fund the law. Congress placed a moratorium on its collection during 2017, but required insurers to pay it in 2018.

"President Trump calls the cost-sharing reduction assistance a bailout for insurers, but this only demonstrates his shallow understanding of health insurance and the law he is charged with enforcing," added Kreidler. "These subsidies help thousands of people in Washington and millions across the country afford coverage. Cutting off the funding only hurts people who struggle to afford and keep their coverage. His decision and inaction by Congress will make it hard for many people to bear these costs. I fear that many will go uninsured. I urge Congress to join Sens. Alexander and Murray in working towards a bipartisan solution (www.CBO.gov). People's lives are depending on it." 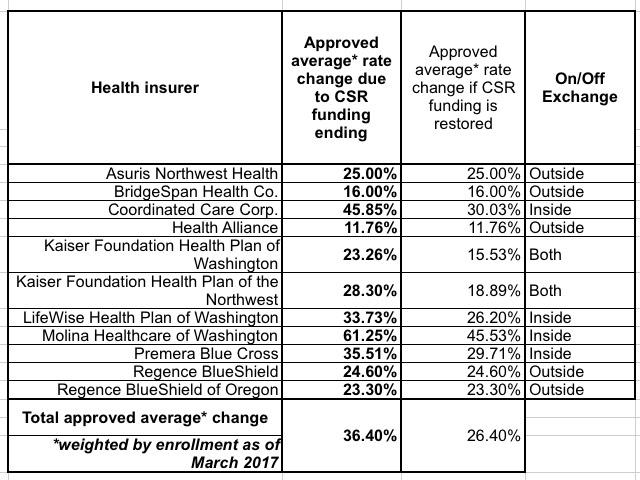