Back in August it looked as though Florida carriers were looking at either 15.5% unsubsidized rate increases on the individual market if CSR reimbursement payments were guaranteed next year, or around 35.5% if they weren't. Well, the official rates have been released by the Florida Dept. of Insurance, and it's even uglier than that for unsubsidized enrollees:

TALLAHASSEE, Fla. – Today, the Office of Insurance Regulation announced the submission of proposed rates for 2018 Federal Patient Protection & Affordable Care Act (PPACA) health insurance plans. Rates for individual major medical plans which comply with the coverage requirements of PPACA may increase an average of 44.7% beginning on January 1, 2018. The majority of this increase – 31 percentage points – is directly attributable to Silver plans offered on the Exchange. Most consumers with the Silver plans will not see an out-of-pocket change, as the federal premium subsidy will also increase to absorb this extra cost. In fact, as noted in the documents linked below, a family of four earning $53,000, as well as an individual earning $27,000, may see a slight decrease in their out-of-pocket health insurance premium in 2018.

Blammo: "Silver plans offered on the Exchange" means "the carriers and insurance dept. agree there's no way in hell the CSR payments will be locked in before tomorrow's signing deadline, so we had to jack up rates an extra 31 points to cover our butts." Put another way, fully 69% (31 percentage points) of the 44.7% total rate hike is specifically due to the CSR issue.

However, this part is also interesting: Like California, Florida appears to be going the "Silver Switcharoo" route:

Consumers enrolled in a Silver on-Exchange plan that do not receive a premium subsidy will have the option of purchasing a similar off-Exchange Silver plan without this extra cost. Plans other than the on-Exchange Silver plans will increase an average of 18%. In 2013, an unsubsidized plan comparable to an existing Silver plan would cost a family of four an average of $7,200. In 2018, the average unsubsidized cost for the same family totals $17,000.

Around 70% of Florida's exchange enrollees are on Silver plans, and as Louise Norris notes over at healthinsurance.org, a whopping 93% of Florida exchange enrollees receive APTC assistance, none of whom will have to worry about the large rate hikes, and many of whom will see a large increase in the amount of tax credit assistance they receive, thus the "slight decrease" noted in the press release.

UPDATE: I've reworked the following section based on hard numbers from the FL Office of Insurance Regulation and this Miami Herald article.

So, how many Floridians will have to deal with the rate spikes? Well, according to the Miami Herald article:

Of the 1.43 million Floridians with an ACA plan in 2017, about three in four, or more than 1 million people, received a cost sharing reduction, according to federal estimates. Nine in 10 Floridians, or about 1.33 million received a separate subsidy that reduced their monthly rate, called the advance premium tax credit.

Most Floridians with a standard ACA plan and a premium subsidy won’t see their monthly costs rise, and some may even pay less than they did the prior year. But the brunt of the 2018 rate hikes will fall squarely on the 7 percent of Floridians, about 66,000 people statewide, who earn too much to qualify for any financial aid to lower their costs of coverage.

In addition to those 66,000 exchange-based enrollees, you also have to add the off-exchange individual market, which is around 570,000 people today including Transitional and Grandfathered enrollees...although TR/GR numbers have likely dwindled down to less than 150,000 combined if the hard numbers from 2015 below are any indication:

About 80% of Florida's exchange-based enrollees choose Silver plans, but Andrew Sprung of Xpostfactoid and I estimate that only perhaps 40% of off-exchange enrollees do so. That would mean roughly 53,000 + 168,000 = around 220,000 or so Floridians currently enrolled in full-price Silver plans would have to switch to the "similar off-exchange plan" in order to avoid the CSR hit. It's complicated and messy, but if everyone plays it properly, it's conceivable that no one will actually be hit in their pocketbook with the CSR cost.

Of course, all ~486K or so unsubsidized enrollees would have to pay the non-CSR portion of the rate increase, which amounts to around 18%, which is still pretty steep, so there's still a real problem to be dealt with here.

While 2017 data is not yet available, federal reimbursements of cost-sharing reductions or payments directly to insurers totaled $1.3 billion in 2016, and premium subsidies received by Florida consumers enrolled in on-Exchange plans totaled $4.7 billion.

For more information, see the documents provided below:

Family of Four and Single Individual Scenario Examples Showing the Average Estimated 2017 vs. 2018 Health Insurance Premiums by Florida County for the Individual Market (using the selection of a Silver plan and including federal premium subsidies to illustrate overall premium costs):

The rate filings consisted of individual major medical plans to be sold both on and off the Exchange. Federal review of the rate filing information has not been finalized by the Department of Health & Human Services and is subject to change. Further information can be obtained from each insurance company, the Federal Government website, the Office’s I-File Forms & Rates Filing Search System, and the Office’s Federal Health Care Insurance Reform webpage. 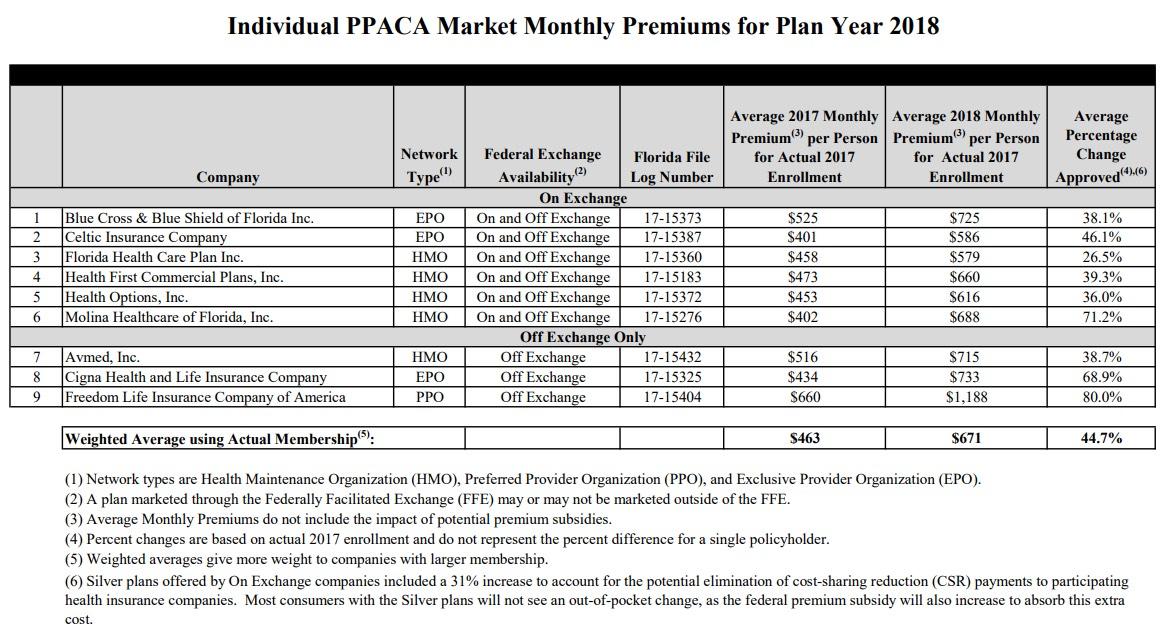 Silver plans make up around 80% of Florida's exchange-based enrollment, or roughly 1.14 million, which is about 57% of the total Florida's 2.0 million-strong ACA-compliant individual market. If you add 31% for CSR funding + 18% for other normal factors, you get 49% rate hikes for exchange-based Silver plans and 18% for everything else.

However, the actual overall average rate increase is 44.7%, so this doesn't make much sense.

Even if you limit it to the on exchange market, it still doesn't add up:

I'm not entirely sure what I'm missing here, but until I hear otherwise, I have to assume that the Florida Office of Insurance Regulation knows what they're talking about, so I'll stick with the current headline.