OK, Indivisible is all over the Graham-Cassidy disaster, so rather than try and cobble together my own action list, I'm cribbing from their email missive. I'll also be posting the latest Graham-Cassidy developments throughout the day.

STOP THE RETURN OF TRUMPCARE. TrumpCare is back and Republicans are as close as they’ve ever been to passing it. There are 12 days left for the Senate to ram healthcare through reconciliation with just 50 votes. This is TrumpCare’s last stand. Call your senators ASAP and tell them to vote no on “Graham-Cassidy” using all the latest resources at TrumpCareTen.org.

TrumpCare is back. REPEAT: TrumpCare is back. We really hoped we’d never have to say that, but you should know by now that this is the bill that just won’t die. Because of the rules of reconciliation, the special process Republicans are using to jam TrumpCare through the Senate, they have until September 30 to finish the job of repealing the Affordable Care Act. That gives them 12 more days to make good on their seven-year promise to repeal the Affordable Care Act. And nothing motivates Congress like a deadline.

Let’s be clear: TrumpCare by any other name is still TrumpCare. The “Graham-Cassidy” bill destroys Medicaid as we know it, hurts people with pre-existing conditions, and takes away funding that helps people afford insurance. It then creates “block grants” to give states far less money than they need and has no accountability that the money will actually help people get affordable health care. And to top off this monstrous bill? Every. Last. Dollar. Disappears. After. 2026.

Republicans already have a plan. Graham-Cassidy TrumpCare bill has already been sent to the Congressional Budget Office for a score -- step one in moving the bill forward (check out our explainer). And last Thursday, over turkey sandwiches at their caucus lunch, Republicans developed a plan for passing this zombie TrumpCare bill. Leader McConnell is whipping votes and rearranging the Senate calendar to make room for one final push.

And he’s hoping you won’t even notice.

Once again, it’s up to you to kill TrumpCare. You did this before. Just a few weeks ago, thanks to your tireless (and loud) constituent power, you killed TrumpCare. And now, millions of people are depending on you to do it again.

TrumpCareTen.org is back (use it). We dusted off TrumpCareTen.org with all of the latest materials for you to take action and #KillTheBill. Find the latest scripts for your senators, our key target states with contact information for key congressional staff, and more. Republicans have 12 days left to jam this bill through, so start making calls now! Use TrumpCareTen.org to find your Senators’ contact info, call them, and tell them you want them to kill TrumpCare for good... and you’ll be watching their vote.

I also took the liberty of reformatting the Center on Budget and Policy Priorities projections of how much funding each state would gain or lose in 2026 if Graham-Cassidy were to become law. By an amazing coincidence, all 15 of the states which would gain gobs of money refused to expand Medicaid under the ACA, and 14 of the 15 just happen to be completely GOP-controlled (and the 15th, Virginia, has a Democratic Governor but his attempt at expanding Medicaid was blocked by a Republican state legislature). Meanwhile, again, by an amazing coincidence, California and New York "just happen" to lose tens of billions of dollars each. This is a blatant, offensively obvious attempt to simply steal billions of dollars from blue states in order to dole it out to red states. There's no other way of putting it. 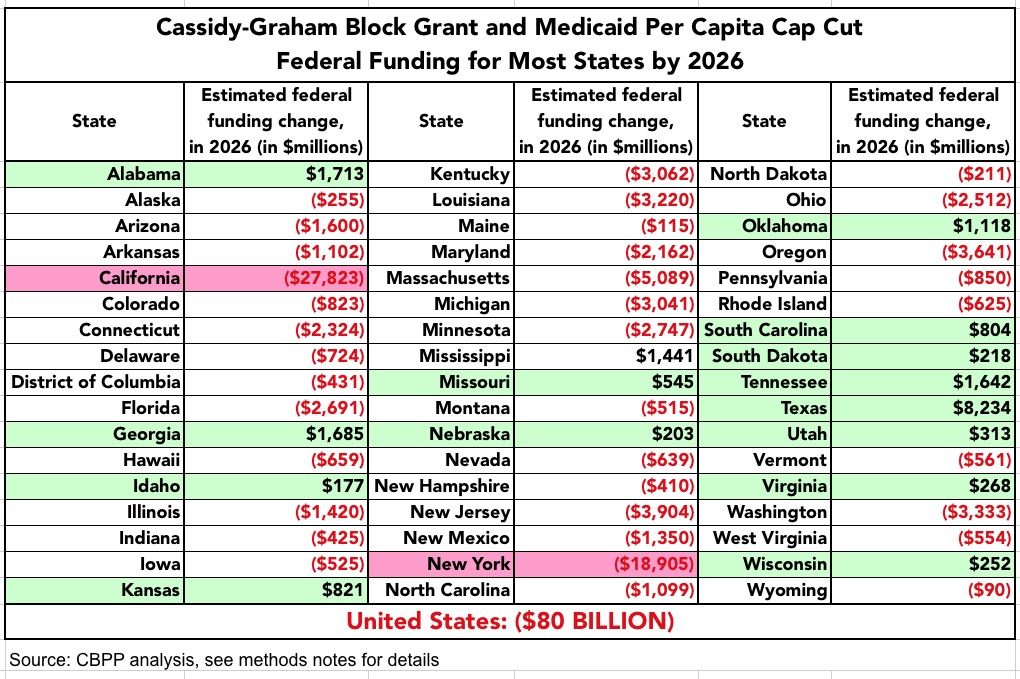 McCain tells @GarrettHaake he wants bipartisan bill with wks of hearings. BUT may "reluctantly" back Graham-Cassidy if AZ Gov approves

Oh, well, I guess if he "feels bad about doing it", that makes everything OK.

UPDATE: A letter was just sent to CBO director Keith Hall from Nancy Pelosi and Chuck Schumer, co-signed by John Yarmuth and, yes, Bernie Sanders (they're the ranking members on the budget committees for the House and Senate respectively): 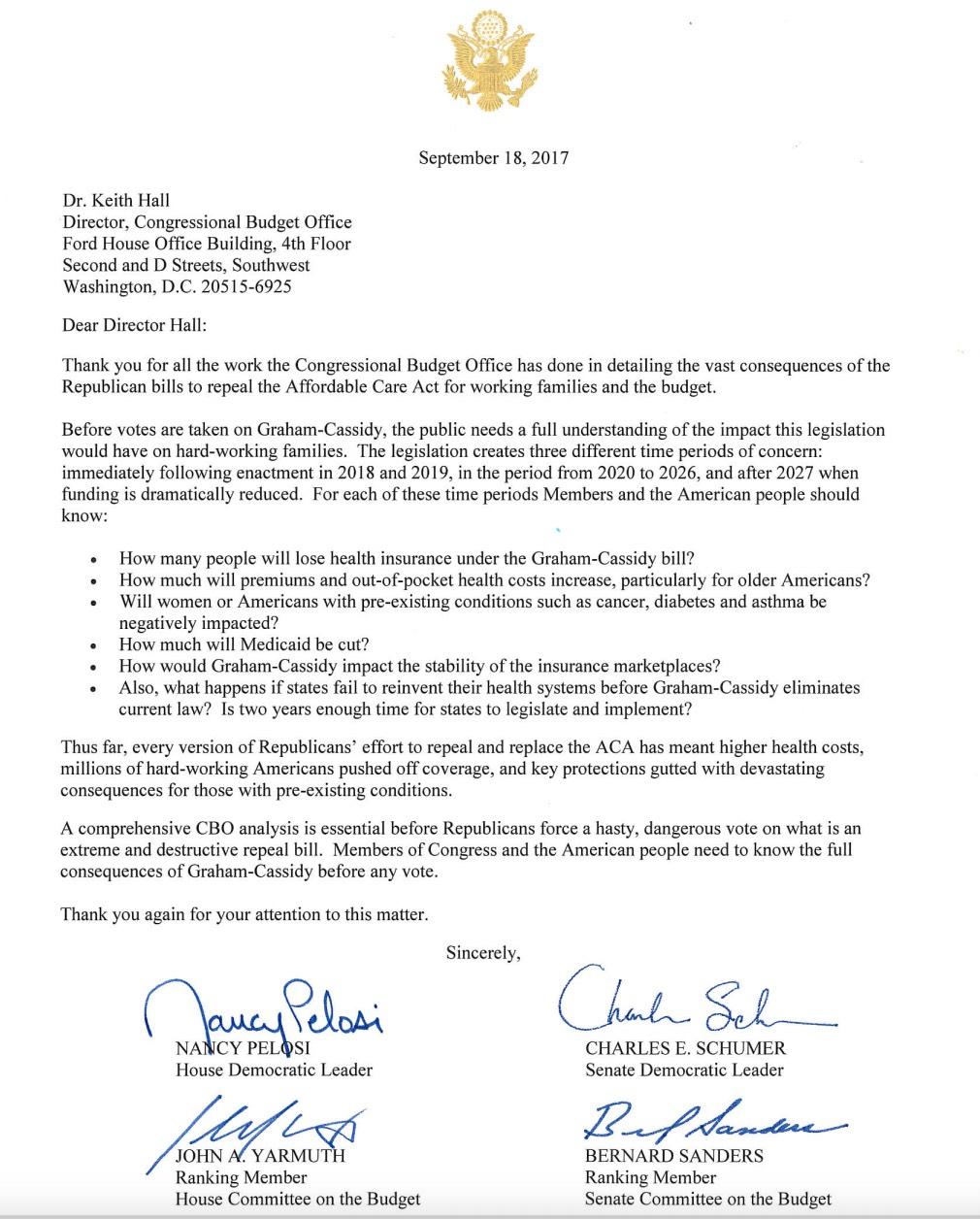 I don’t know if even Mitch McConnell would have the chutzpah to schedule a vote during the most sacred Jewish holy day, but he might...which would be a slap in the face to Dianne Feinstein, Ron Wyden, Chuck Schumer, Ben Cardin, Michael Bennet, Al Franken, Richard Blumenthal, Brian Schatz and even, yes, Bernie Sanders himself, not to mention.

For that matter, Rosh Hashanah runs from this Wednesday evening through Friday, which could complicate their schedules as well.

Rosh Hashanah/Yom Kippur will also make it more difficult for many Jewish activiststo do what they need to do during these critical final days.

UPDATE: McCain earlier stated that if Arizone GOP Governor Doug Ducey gave Graham-Cassidy the thumbs up, that’s likely enough cover for him to “reluctantly” vote for it.

This is not looking good, but KEEP CALLING.