Yesterday I corrected the Senate GOP's highly misleading state-by-state projections of how much money each state would gain or lose under Graham-Cassidy. They tried to make it look like total federal funding from 2020 - 2026 would increase by about 5.6%, but they only achieved this by adding a phantom $112 billion which would supposedly be "saved" by the states due to them no longer putting up 10% of the funding for Medicaid expansion, which is utterly nonsensical on the face of it. Even worse, their table completely ignored the change to a per capita cap formula for funding non-ACA Medicaid, which would, according to an Avalere Health analysis, reduce funding by another $120 billion nationally in that time period.

Using the GOP's own numbers for projected funding under current law versus their own block grant projections, I showed that instead of coming out ahead, funding would actually decrease by $40 billion nationally...and when you include the per capita change, it would actually drop by about $160 billion.

Well, this morning Avalere Health has posted an updated, revised analysis of what they project state-by-state federal healthcare funding changes to look like in the future under the updated, revised version of Graham-Cassidy...and it's not any prettier. In fact, their projection is even worse...and they're very clear about what they're measuring and why they (properly) aren't including any "state savings" which are irrelevant to the actual amount of federal funding which would be provided:

Additional Notes: This analysis, like the Avalere analysis on September 20, solely views the change in federal funding. Under the ACA, Medicaid expansion does require states to bear, in 2020 and beyond, 10% of the Medicaid expansion costs. This analysis does not include this spending by states. Additionally, this analysis does not project the potential increased state costs for the Medicaid per capita caps under GCHJ, where states may have to make up the reduced federal spending through additional state spending. This analysis does not account for the required state match to receive relief from the ACA’s DSH cuts under GCHJ. Avalere consistently does not take into account required increases or decreases in state spending due to these policies. Avalere solely models the changes in the amount of funding going from the federal government to states. Finally, Avalere does not model the impact to states ability to raise revenue due to the provider tax caps in GCHJ.

Avalere includes their own state-level breakout table, but they have this annoying habit of listing the states by their two letter abbreviation instead of their full name, so I've reformatted their data accordingly: 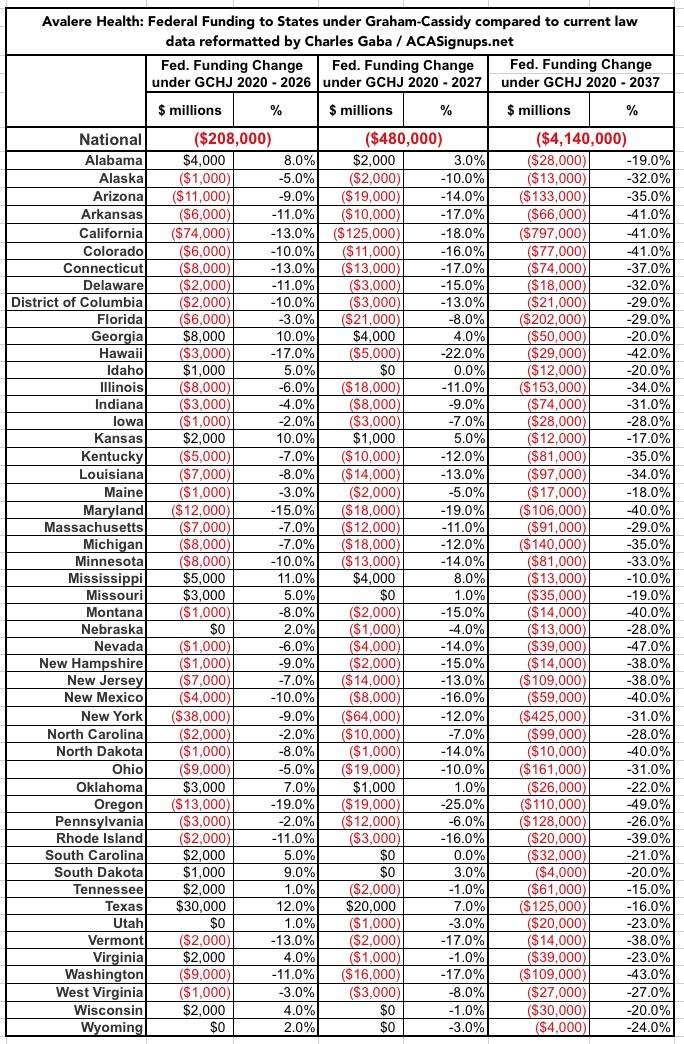 As you can see, in the short term (2020-2026), Avalere's projections are even uglier than I had it estimated at yesterday: A net funding decrease of $208 billion, vs. my earlier estimate of around $160 billion. Of the 6 "payoff target" states I noted (Alaska, Arizona, Kentucky, Maine, Ohio and West Virginia), Avalere projects that all six would lose funding over the next 9 years, even Maine (which I had projected would come out about $470 million ahead).

Avalere's analysis then goes two steps further, adding 2027 to the mix. This is important because the Graham-Cassidy "block grants" would cut off starting in 2027. As a result, Avalere projects that total net funding would be cut by another $272 billion in 2027 alone; even most of the states which are "winners" in the short term would end up losing money, leaving only a handful breaking even or still coming out slightly ahead. Finally, Avalere looks at the long view: Going twenty years out, every single state would see massive funding cuts relative to current law, with California seeing a staggering $800 BILLION less over the next two decades than it would otherwise be receiving.