In any event, according to this Wall Street Journal article focusing on the impact of the Cost Sharing Reduction debacle and other "uncertainty" factors deliberately injected into the mix (i.e., deliberate sabotage on the part of the Trump Administration), the approved rate increase for Ambetter of Magnolia (the sole on-exchange carrier in Mississippi next year) is 47.4%, and the insurance commissioner (a Republican himself) stated that over 60% of that is due specifically to the CSR issue:

Mississippi’s insurance commissioner, Mike Chaney, said he is approving a 47.4% average premium increase for the state’s one ACA exchange insurer, which would have been around 17.9% if the cost-sharing payments were guaranteed. The insurer couldn’t bear the potential extra expense of funding the cost-sharing subsidies without the bigger premium bump, he said: “They can’t take that, they just can’t do it.”

When averaged in with the other filings, Mississippi's average rate increases for 2018 would have been 16.1% if CSRs had been guaranteed, but will instead average around 38%.

Meanwhile, in South Carolina, the headline buries the lede:

ACA premiums in SC could rise by 31 percent.

BlueCross and BlueShield of South Carolina, which offers the only individual Affordable Care Act plan on the exchange in South Carolina, had requested a 33.4 percent hike, saying premiums last year did not cover claims paid, administrative costs, commissions, taxes and fees.

The hikes come as the fate of the Affordable Care Act and continued funding of federal subsidies remains uncertain.

A “cost sharing reduction” subsidy reduces the amount that patients pay for deductibles and copays. About 20 percent of the 31 percent increase in premiums for S.C. residents is attributed to the uncertainty of funding for that subsidy, said S.C. Department of Insurance Commissioner Ray Farmer.

If the federal subsidies are funded then the S.C. premiums will not be increased as much. “We will do everything in our power to get ... the rates reduced by 20 percent,” Farmer told the Observer.

Well, OK, it's not about "reducing" the rates by 20 percent, it's about reducing the increase by 20 percentage points, but whatever. The point is that this is as clear as they can make it:

There is a second carrier in SC selling off-exchange individual market policies, and they were approved for only a 10.0% increase (they had previously asked for 11%), so when you average things out across the entire ACA risk pool, it comes in slightly lower:

I have the no-CSR average at 30.4%; the official SC DOI report pegs it at 30.7%, presumably because the market share ratio is slightly different from what I list. In any event, that means the average rate increase would have been 11.3% if CSRs had been guaranteed by Congress...but since they didn't, it'll instead average 30.7%: 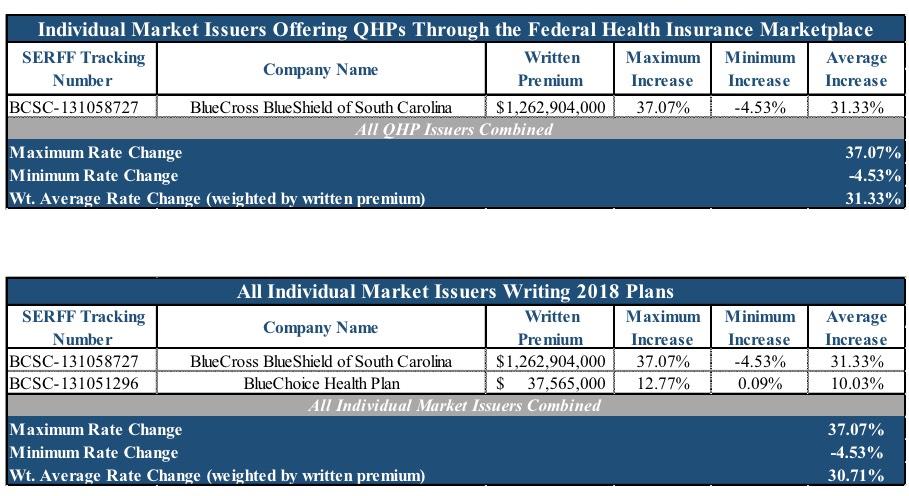