UPDATE: Idaho proposes an interesting idea for their partly-self-created problems

Idaho is a bit of an odd duck when it comes to the ACA. On the one hand, they're the only state completely controlled by Republicans to set up their own ACA exchange (Kentucky's much-lauded "kynect" exchange was created by Democratic Governor Steve Beshear by executive order...and was then promptly scrapped the moment that incoming GOP Governor Matt Bevin took office). On the other hand, they're also the only state with their own exchange not to expand Medicaid. (As an aside, ID is also the only state to start out on the federal exchange the first year before breaking out onto their own exchange website).

Since they never expanded Medicaid to childless adults and non-ACA Medicaid only covers parents up to 24% of the federal poverty level (around $2,900/year for a single adult), that also means Idaho has tens of thousands of residents caught in the "Medicaid Gap", earning too much to qualify for Medicaid but too little to qualify for APTC tax credits on the individual ACA exchange (100% is the floor for APTC assistance). The exact number caught in the Medicaid Gap is a bit confusing...the Kaiser Family Foundation puts it at 33,000, plus another 17,000 who do qualify for heavy APTC assistance (via the 100-138% FPL overlap demographic) but really should be on Medicaid instead. The article below, however, lists the Gap population as 38,000 in one spot...but 78,000 in another. My guess is that 38,000 is the correct number, plus another 40,000 in the 100-138% FPL range.

In any event, the Gem State (seriously...that's their nickname; who knew?) has come up with an interesting potential (partial) solution to both their Individual Market and Medicaid Gap woes. Thanks to Twitter follower & Idaho resident "Sommar" for the heads up:

Idaho health officials are taking another crack at addressing the state’s Medicaid gap.

But unlike prior efforts to simply expand Medicaid or design special programs for low-income Idahoans, the new plan would help the middle class by getting health insurance rate hikes under control, its proponents say.

The group would include about 2,000 to 2,500 adults who have costly diseases such as stage-4 cancer, hemophilia or cystic fibrosis. Those adults drive about 40 percent of the insurance claims for individual health insurance, according to Armstrong and Cameron. Removing them from the exchange pool would take out a large chunk of the medical spending that is driving double-digit rate increases, they said.

“This, by far, would stabilize [rising insurance rates] instantly, and in fact we would expect rate reductions,” Armstrong said.

Those adults would not be forced to switch to Medicaid; they could opt to continue buying insurance on the exchange. But switching to Medicaid would give them at least one benefit, the department said — access to Medicaid’s lower prices for medical care, especially for pharmaceuticals, while they are in treatment for health conditions that often require high-priced drugs.

It wouldn’t be the first time certain categories of patients have been waived onto public health insurance. Medicare has special eligibility for people with kidney failure. Idaho’s Medicaid program already makes an exception to cover treatment for low-income women with breast and cervical cancers.

OK. This basically means turning Medicaid into a High Risk Pool. I've spoken out strongly against HRPs in the past, but the main reason for that is because HRPs are usually isolated from everyone else (the employer market, the individual market, Medicare and Medicaid), making them incredibly easy to underfund or otherwise abandon when no one's looking. This would be a bit different: The HRP in question would be the existing Medicaid program, which covers over 23% of the population nationally (17.5% in Idaho). Slashing the Medicaid budget in Idaho would presumably screw all Medicaid enrollees, thus making it far more difficult to do. In addition, as the article notes, the state already covers women with breast & cervical cancer who might not otherwise qualify, so there's precedent.

The only part about this which I'm bothered by is how they determine someone would qualify. There's two ways to do this that I know of: Either bring back medical underwriting & require everyone who tries to sign up for an ACA exchange plan to fill out their medical history (which is strictly prohibited by the ACA as part of the Guaranteed Issue/Community Rating provisions) and redirect them to Medicaid up front...or wait until after they're enrolled in an exchange plan & are diagnosed with one of the diseases in question, and then allow them the option of making the move. The first option is completely unacceptable. The second is presumably exactly how they already handle it for the breast/cervical cancer patients; if so, I guess that could work.

Then comes the second part of the Idaho plan:

• The plan would enable working-poor Idahoans to buy health insurance plans through the exchange.

Childless adults who are below the federal poverty line — $12,060 a year for a single person or $16,240 for a couple — do not qualify for Medicaid in Idaho. They also don’t qualify for subsidized plans on Idaho’s health exchange. Hence, they are in the “Medicaid gap,” numbering an estimated 78,000 people.

Under the new plan, about 38,000 people who are in the Medicaid gap would qualify for federal subsidies to buy insurance on the exchange.

As noted above, I'm a little confused by the 78K/38K numbers above. If 40K are 100-138% FPL, this means that all Medicaid Gap members would qualify for APTC assistance with exchange policies, which wouldn't be ideal but would be a lot better than no coverage at all.

If, however, 78K is the actual number of adults under 100% FPL, that means that the Kaiser Family Foundation's estimate is way off and that only about half the Gap enrollees would qualify for APTC, which doesn't make much sense to me (are they suggesting lowering the APTC cap to 50% FPL or something?).

In any event, there's another interesting quote in the section which discusses how the proposal would be paid for:

Higher-income people generally would have to contribute to the cost of their Medicaid coverage, according to the budget request.

I'm not sure which "higher-income" people this refers to. If it means middle-class members of the 2,500 High Risk population, then it's really just an extremely targeted version of Nevada's "Medicaid Buy In" bill (which passed the state legislature but was vetoed by the Governor a few months back).

If, however, "higher income" refers to Medicaid Gap members who earn, say, 75-100% FPL ("higher income" only when compared to those below 75%), then that's similar to Indiana's overly-complicated Medicaid expansion "waiver" system, which charges enrollees 2% of their income to enroll.

Again, none of this is even close to ideal, but if the choice is between this and no expansion whatsoever, it's worth considering, I suppose.

Of course, the simpler solution would be to simply expand Medicaid to 138% of the Federal Poverty Line...which would not only cover all 38,000 Gap enrollees, but would also shift the 100-138% crowd off the exchange risk pool as well (knocking rates down a bit, as lower income folks tend to be higher risk overall) and covering a portion of the 2,500 High Risk folks at the same time (I presume a good portion of them fall below 100% FPL as well).

UPDATE: I've heard from from Audrey Dutton, the reporter who wrote the story above, who clarified that yes, Idaho's total Medicaid Gap population was indeed estimated to be around 78,500 people as of 2016, plus another 39,000 in the 100-138% range, for a total of 117,644 Idahoans who would be eligible for Medicaid if the state just expanded it via standard ACA provisions: 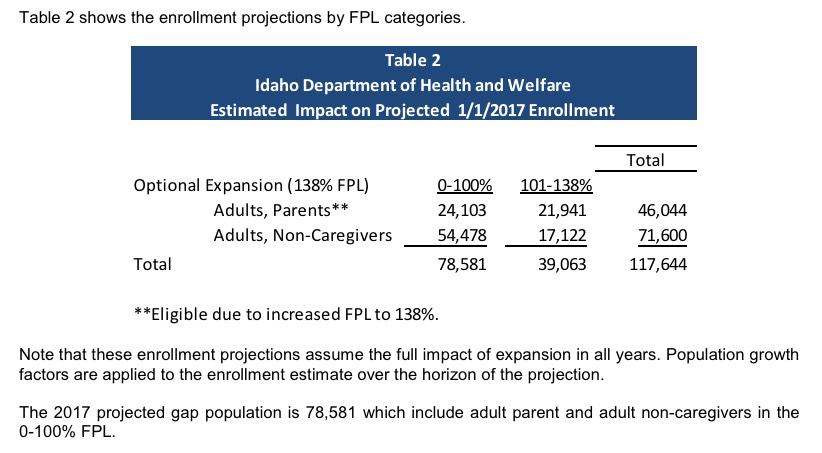