When I last checked in on Maryland's individual market rate hikes for next year, the picture was pretty grim: Overall requested increases of around 46%...and that assumed that CSR reimbursements are made in 2018. If you assume CSRs aren't paid, it looked even worse: A whopping 57% average increase statewide for unsubsidized enrollees. Ouch.

Today, the Maryland Insurance Dept. issued their approved rate changes for the individual and small group markets...and while they did knock the rate increased down significantly, there's still not much to be cheery about. It also includes a couple of handy additional data points:

​BALTIMORE – The Maryland Insurance Administration (MIA) today announced approved premium rates for both small group and individual health insurance plans to be offered in the state for coverage beginning Jan. 1, 2018. More than 90% of Marylanders are covered by health insurance plans offered through large employers or employers who self-insure, or participate in “grandfathered” plans purchased before March 2010 or in Federal plans (such as Medicare, Tricare, or federal employee plans). For these Marylanders, today’s announcement will not affect their rates.

To assist the Administration in making rate decisions, MIA actuaries reviewed the data, methodologies, and assumptions companies used to develop their proposed rates. The Administration also considered public comments, along with other relevant factors, in determining whether to approve, modify or deny requested rates. This year, the MIA also engaged an outside actuarial firm, Oliver Wyman, to do an independent third-party review of CareFirst’s individual non-Medigap market rate submissions.

Small Group Market Summary: Approximately 257,000 Marylanders are enrolled in small group plans. The health insurance rates will increase by an average of 1.7% versus the originally filed 4.2%. This single-digit increase can be attributed to favorable experience, a competitive marketplace and two decades of reforms in the State small group market. Four health insurance carriers filed to sell HMO and PPO products in the small group market for 2018: Aetna, CareFirst, Kaiser, and UnitedHealthCare (UHC).

Individual Non-Medigap Market Summary: Approximately 243,000 Marylanders are enrolled in individual health plans. Health insurers have sought rate adjustments in response to significant changes in federal regulation and market dynamics over the past few years. Cigna will no longer be offering individual plans in Maryland for 2018. The average increase will be 33.0% versus the originally filed 43.1% which can be attributed to: 1) the reinstatement of the health insurer fee; 2) healthy members leaving the market; 3) claims costs rising at about 8% annually; and 4) actual claims experience being higher than expected. The rates do not include any factor based upon the political uncertainty of future cost-sharing reduction payments. Two carriers will offer plans in this market: CareFirst and Kaiser. The MIA approved rates for CareFirst's plans are 1.2% lower than amounts recommended by the third-party consultant, Oliver Wyman.

2018 Open Enrollment: Open enrollment runs from Nov. 1, 2017 through December 15, 2017. Marylanders are encouraged to shop rates and may sign up for new plans or renew existing ones during the open enrollment period.

Small Group Market: Below is a list, by carrier, of rates requested versus approved: 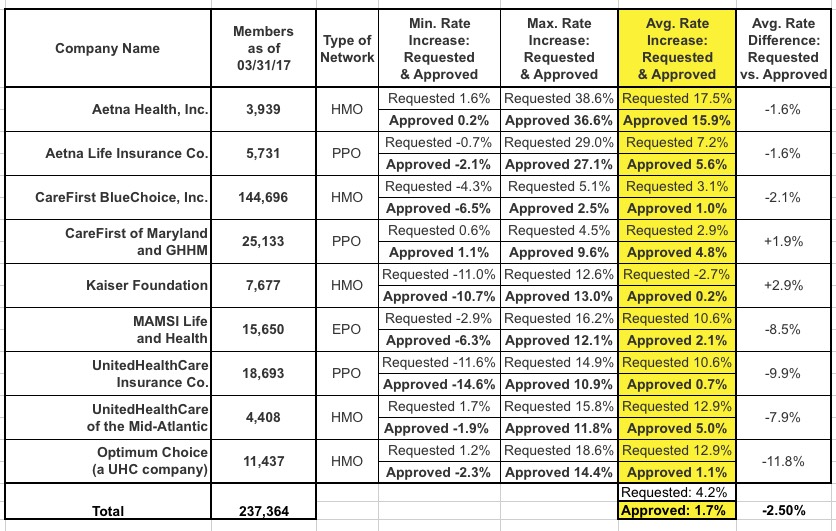 The Administration also announced individual non-Medigap health insurance rates. Below is a list, by carrier, of rates requested versus rates approved:

If you tack on the additional 10.8% estimated by the Kaiser Family Foundation for CSR reimbursement losses (loaded across all metal levels), Maryland drops to 33% with CSR payments or 43.8% without. Still pretty ugly, but obviously better than 57%...