As noted the other day, now that I've compiled the initial 2018 rate filing requests for 46 states + DC (the remaining 4 states aren't public yet), it's time to go back to the earlier states I analyzed and see whether there's been any updates/corrections to my original estimates. I started running the numbers back in early May, and a lot has changed since then, with carriers dropping out of the exchanges, expanding to fill the gaps or simply refiling with revised pricing requests.

Maryland was the second state I analyzed; I originally came up with the following average:

At the time, I assumed that the 44.7% statewide average included the Cost Sharing Reduction (CSR) factor, and based on comments by the CEO of CareFirst, I reduced it by about half to get a rough estimate of how much they'd be asking for if CSR payments were guaranteed, the individual mandate enforced and so on. Instead, reviewing the filing letters a second time revealed that all of the carrier requests assume CSR payments will be made after all (and presumably assume mandate enforcement being in place). This means that the CSR factor has to be added on top of the official requests.

In addition, unfortunately, there's bad news regarding Evergreen Healh Co-Op. It was originally one of the 23 ACA-created Co-Ops; while most of the other co-ops collapsed entirely, Evergreen made a bold attempt to convert itself into a privately-financed carrier instead. It looked like things were going well and that they'd be re-joining the marketplace this fall...until a few weeks ago when this alert was posted: 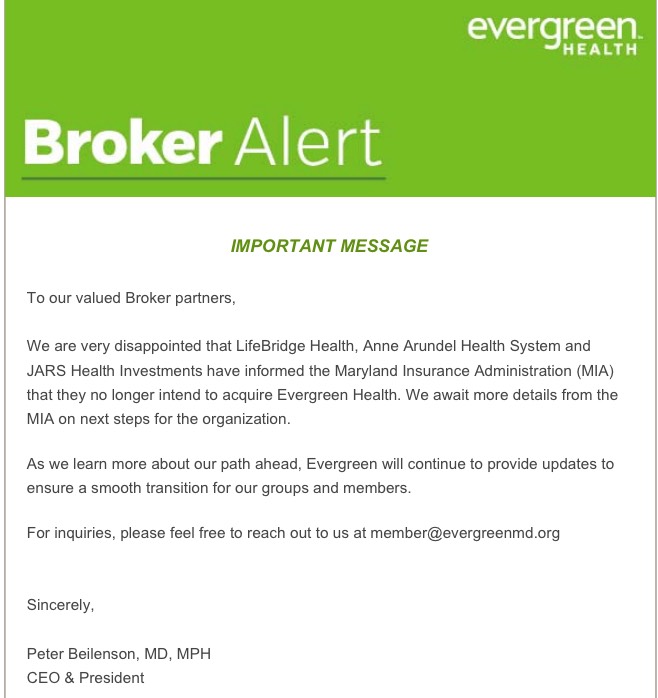 (sigh) Crap. Evergreen has around 25,000 members at the moment who will not have to shop around elsewhere (I'm not certain whether all 25K are on the individual market or if some are in small group plans, not that it changes things much). It also appears that Cigna has dropped out as well, although they only have about 700 enrollees to begin with.

It should also be noted that "GHSMI" is actually just another division of CareFirst, so there are really only 2 carriers actually participating in Maryland's individual market next year: CareFirst and Kaiser.

In any event, with both of these changes, here's the updated/revised Maryland analysis: 46.1% with CSR payments, 57.0% (ouch) without: