UPDATE: As I've been warning for months, several carriers have now openly stated that perhaps 40% of their requested rate hike is due specifically to concerns about the Trump administration & the GOP's ongoing sowing of confusion and outright sabotage of the ACA and the individual market.

Connecticut is the 3rd state to post their initial 2018 rate filings.

Unlike most states, Connecticut did all the legwork for me, making it incredibly easy to plug the numbers into a spreadsheet for weighted average (requested, unsubsidized) rate hikes for both the individual and small group markets: 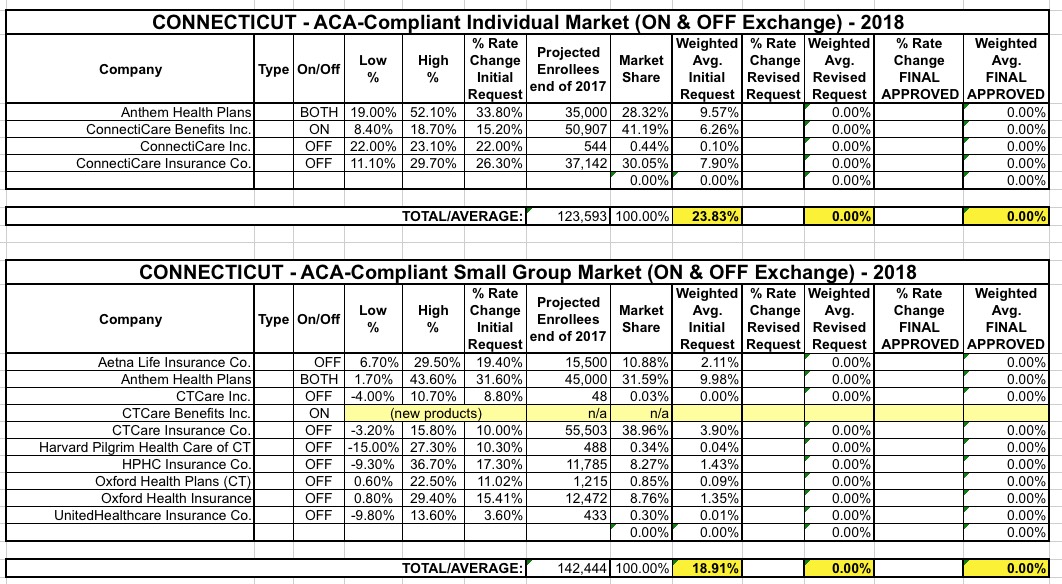 The Connecticut DOI even lists the number of covered lives in a no-BS, straightforward way, so unless some carrier is dropping out of one or more of the markets, the numbers above should represent the total number of ACA-compliant enrollees Connecticut expects to have at the end of 2017, not including grandfathered enrollees (CT didn't allow transitional plans) in both markets.

Overall, it looks like CT carriers are asking for a weighted, unsubsidized average rate hike of around 23.8% on the individual market and 18.9% on the small group market.

As for the reasons for the increases, the intro page is more clear about this than either Maryland or Virginia have been:

Other Factors:  Carriers have filed to take into consideration the perceived lack of strong enforcement of the individual mandate, the lack of stability of the risk adjustment mechanism and the evolving participation of carriers in the market.

OK, so out of 23.8% overall, around 2-3% of it is due to the Health Insurance Tax finally being implemented (if it actually is). That leaves another 21% or so. This is the first time I've seen an official insurance commissioner website come right out and say, point blank, that Trump/Price playing head games with mandate penalty enforcement is part of the problem, though they don't try to quantify it beyond mentioning it as one of a bunch of factors.

MAJOR UPDATE: OK, it turns out that the 23.8% requested hike average assumes CSR payments will be paid:

In Connecticut, the Insurance Department is giving insurers flexibility by allowing them to refile rates if a key Obamacare program known as cost-sharing reduction payments are eliminated by the Trump administration.

The end of the program is expected to raise insurance rates by an additional 19 percent.

Actually, that 19% from the Kaiser Family Foundation applied to the nation as a whole; for Medicaid expansion states, Kaiser estimates it would tack on an extra 15 percentage points, for a total of around 38.8% in that scenario.

UPDATE 10/14/17: Now that I have a better understanding of how Kaiser Family Foundation's "19% CSR factor" was calculated, I've had to go back and revise several early state estimates. It turns out that they estimate the CSR impact to only be 15% for Medicaid expansion states (vs. 21% for non-expansion states, for a national average of 19%). In addition, it's not 15% across the board, it's 15% for silver plans only, which in the case of Connecticut includes 64% of exchange enrollees. That translates into around 9.6% overall. This doesn't change the "partial sabotage" average at all, but does reduce the "full sabotage" average by about five points: