For the past two years, Virginia has been the first state in the nation to post their initial rate filings for the following year. I originally compiled their individual market 2018 change requests back in early May, and came up with the following at the time:

UnitedHealthcare had previously announced they were dropping out of Virginia, but I didn't have an enrollee number for them, and Aetna had also just announced their withdrawl from the state. I hadn't yet finalized my "CSR/Mandate Penalty" factor layout yet; at the time I assumed the 30.6% weighted average requested assumed full CSR/mandate sabotage and reduced that number by 17 points based on the Kaiser Family Foundation's "19% national average CSR rate hike" estimate analysis, which estimated the CSR impact at 17 points for Virginia.

Unfortunately, I was wrong on both counts: The 30.6% request assumed CSR payments would be made and that the mandate would be enforced...and I also had the 17 point factor too high, because I forgot to account for the fact that this only applies to silver plans, not other metal levels. In Virginia, about 74% of individual market enrollees have silver, so that translates into around 12.6 points due to CSR reimbursements, not 17. Now that I've compiled the filing estimates for nearly every state, I had intended on going back and updating/correcting the earlier states...

...and as it happens, today turned out to be an ideal time to do so for the very first state I had originally analyzed, because of this:

“Today, planning and pricing for ACA-compliant health plans has become increasingly difficult due to a shrinking and deteriorating Individual market, as well as continual changes and uncertainty in federal operations, rules and guidance, including cost sharing reduction subsidies and the restoration of taxes on fully insured coverage,” Anthem said in a statement Friday afternoon.  “As a result, the continued uncertainty makes it difficult for us to offer Individual health plans statewide in Virginia.”

The off-exchange offerings are token; they're there purely to take advantage of an ACA loophole which allows carriers to return to the exchanges within 5 years as long as they keep at least 1 policy available off-exchange somewhere in the state (this is yet another glitch in the ACA which should be resolved...if the idea is to prevent carriers from jumping in and out year to year, they should be required to at least maintain, say, the same plan offerings/coverage areas off-exchange that they did on exchange or something to get around the 5-year ban.

Anthem (under the "HealthKeepers" brand in VA for whatever reason) has around 165,000 individual market enrollees...over half the enrollees in the state, so this one stings.

In addition, a couple of the other carriers which aren't leaving have refiled their rates for 2018 as well, with different requests. Between Anthem bailing, the revised filings and my own corrections as noted above, here's what Virginia's statewide weighted average looks like now:

UPDATE: Just in case anyone was still unclear as to the reason for Anthem pulling out of Virginia's individual market: 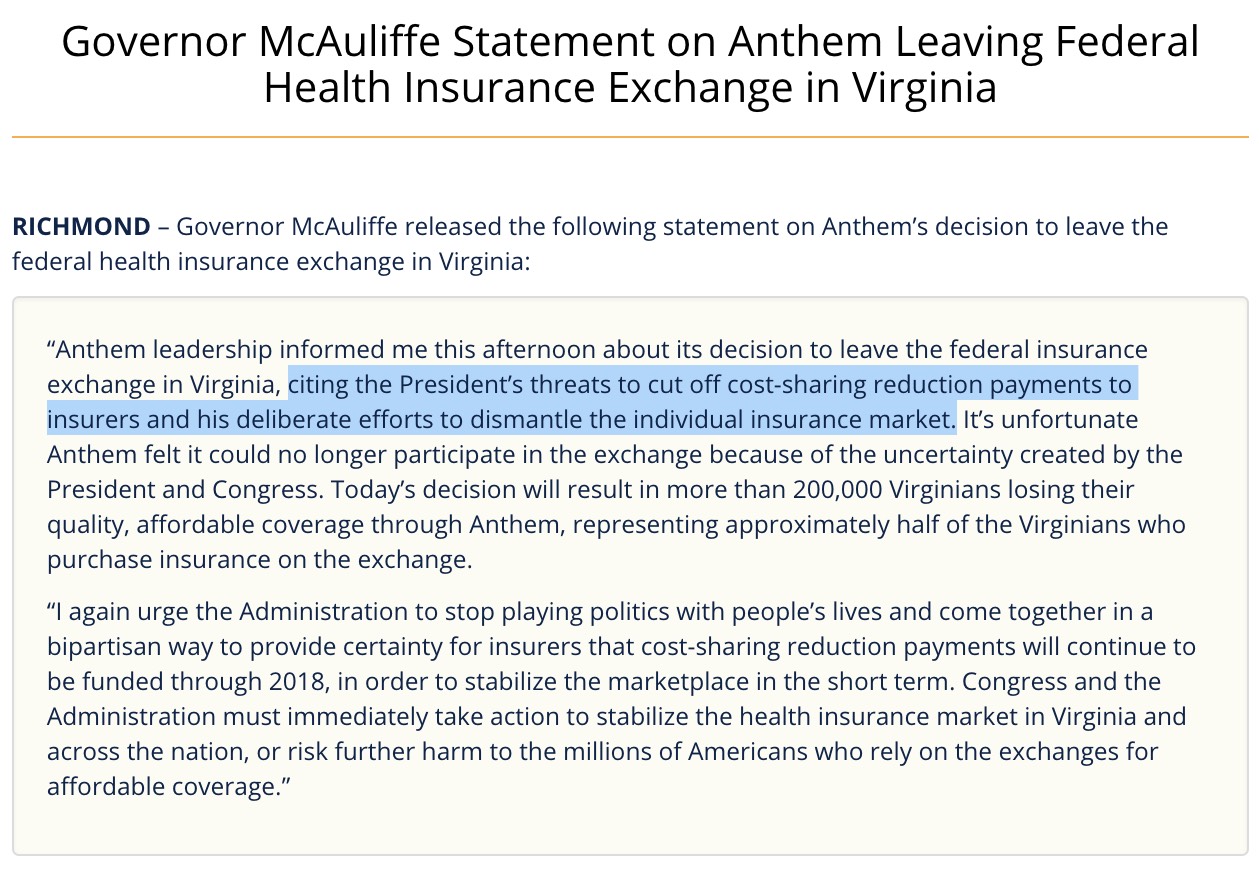