For 2017, unsubsidized enrollees on the Minnesota individual market faced massive rate hikes averaging 57%. It was so bad that the only way they could convince some carriers to participate in the market was to allow most of them to put a cap on how many people they'd enroll (with the balance being shunted over to Blue Plus, the HMO division of BCBSMN). This resulted in a massive initial surge of enrollment, as it was on a first-come, first-serve basis...but also left off-exchange and unsubsidized exchange enrollees high and dry.

In response, the state scrambled to pull together a $300 million package to help supplement premiums for those folks...knocking a flat 25% off of their premiums for 2017. This helped ease the problem in the short term, but the larger issue still loomed going forward.

For the long term, Minnesota legislators worked to put forth a long-term reinsurance program to address excessive rate hikes. There's still controversy over it because MN's GOP legislators chose to fund the program by essentially stealing money from other worthy programs, but it's a done deal. The plan still has to be signed off on by the HHS Dept., but oddly enough, this is one positive idea that HHS Sec. Tom Price supposedly supports, so it sounds promising.

So, how much of an impact could this program have on Minnesota rates? Try this on for size:

The summary table below provides an overview of proposed average rate changes from 2017 in the individual market, as calculated and submitted by the insurers. An insurer's range reflects rate changes across different products.

This year, for the first time, insurers were required to submit two sets of proposed rates:

In 2017, Minnesota enacted a law that creates the Minnesota Premium Security Plan – a reinsurance program for 2018 and beyond that is designed to stabilize premiums in the state’s individual market by providing insurers with some financial protection against especially high-cost claims. Implementation of the reinsurance program requires federal approval, which is pending.

The actual rate change a consumer will experience in 2018 can vary from the average – with factors such as specific plan, geographic rating area and age playing a major role.

Yes, that's right: Assuming the reinsurance plan is approved, rates for at least 3 of the carriers (and possibly 4) would drop...while if it isn't approved, rates would increase by up to 32% for some plans.

Unfortunately, I can't seem to find the actual rate filing justification letters which usually give the weighted average change request and the market share for each carrier, but I can hobble together a rough estimate.

First, market share. According to the July MNsure dashboard report, there's around 126,000 on-exchange enrollees. The press release accompanying the rate filings (see below) indicates that MN's total individual market is around 166,000; over 75% of that is on MNsure. Thei on-exchange breakout is: 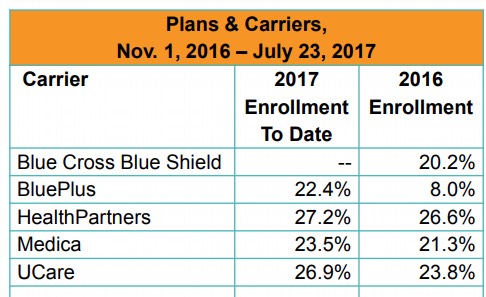 PreferredOne appears to only have about 1,700 enrollees on the off-exchange individual market, so that leaves around 38,000 off-exchange enrollees unaccounted for; I'm going to assume they're split among the other 4 in similar proportions as shown above.

As for the average rate hikes within each carrier, at the moment all I can do is take the midrange from the first table above: 5.0% for BluePlus, -14.0% for Group Health, flat for Medica, -38.8% for PreferredOne (off exchange only), and -14.5% for UCare.

Again, I realize these are pretty speculative, but assuming they're close, it should look something like this:

I can't stress enough that these estimates are highly speculative...without knowing the actual weighted averages or the actual current enrollment market share, I can't be sure about the above, but it's the best I can do for now: a 6.9% average drop in premiums if the reinsurance program is approved, or a 13.9% increase if it isn't.

UPDATE: OK, I was able to track down the actual rate filings, and they...didn't change things much, although they did clarify the numbers above and added some more interesting tidbits (see below). The "reinsurance" average stays the same (-6.9%), but the "NO reinsurance" average drops a bit, from 13.9% to 12.6%:

Group Health assumes reinsurance will be approved...and remember, that 14.1% rate reduction ASSUMES MANDATE ENFORCEMENT SABOTAGE, which means without that factor, rates would be even lower (both with and without reinsurance), though I don't know by how much; I'd guess perhaps 4 more percentage points: 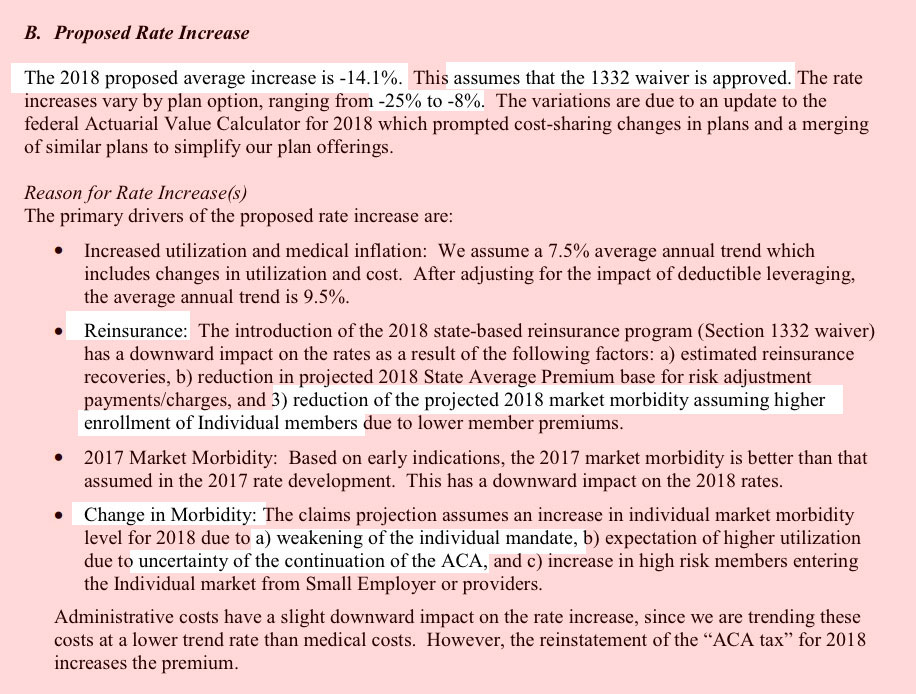 Blue Plus (BCBSMN...their HMO division) again lists non-enforcement of the mandate as the major factor, and also includes a different spin I hadn't even thought of before: High-cost people moving in from out of state: 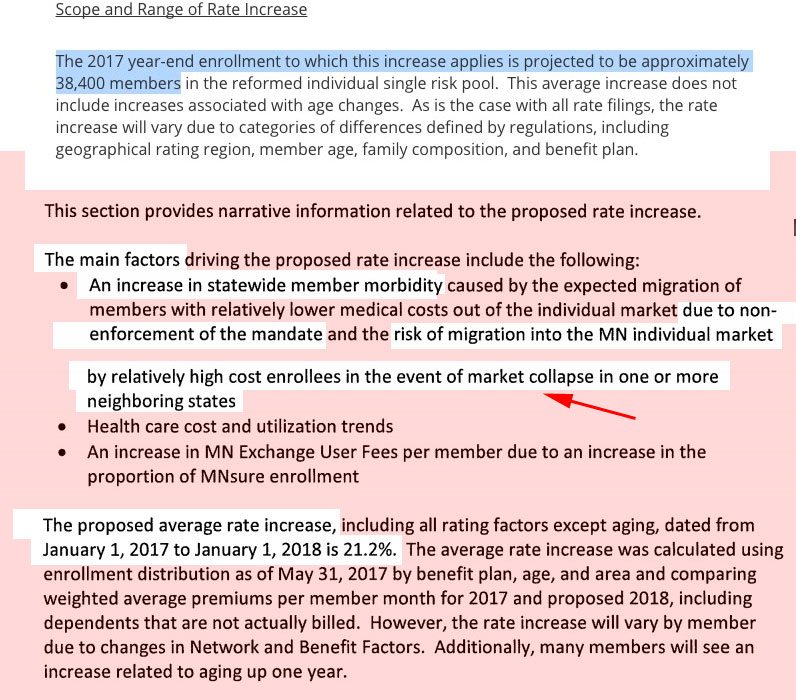 PreferredOne is off-exchange only anyway, so the CSR issue doesn't factor into their rates anyway (which is probably why it's so low...a huge reduction whether reinsurance is included or not). The only noteworthy thing here is that they're down to only 300 enrollees anyway, making them a rounding error this year: 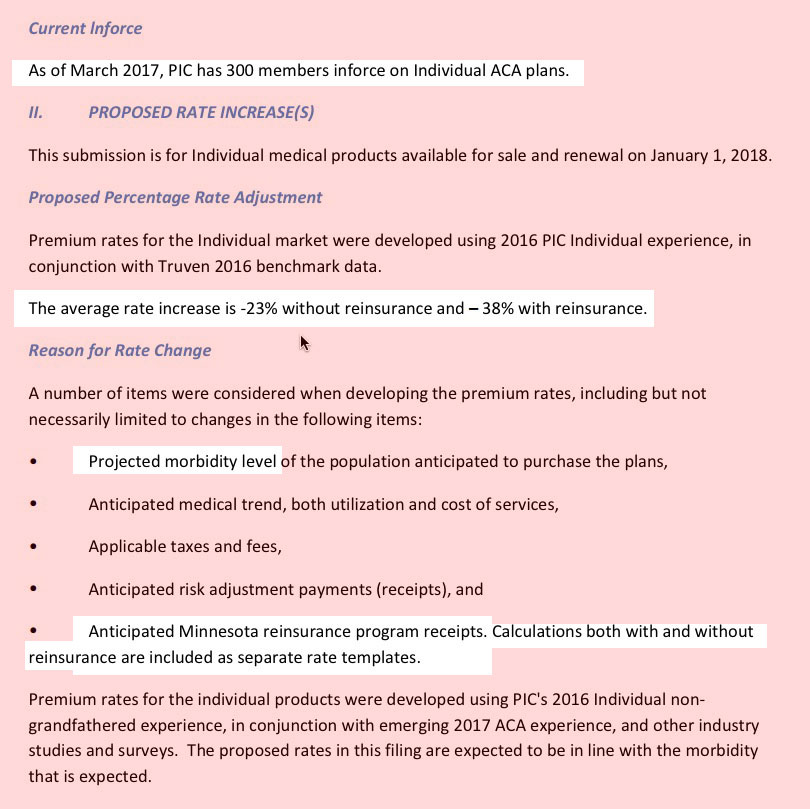 Medica is pretty cut & dry...and again, lists "unprecedented amount of uncertainty/risk" although they don't break out the CSR or mandate factor: 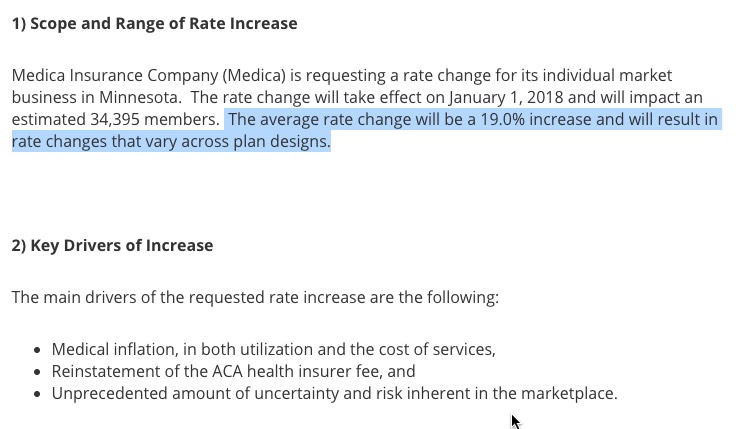 Finally, Ucare's 14.5% reduction ppears to be assuming that CSR payments will be made. They don't mention CSRs anywhere, but they do break out their rate changes by metal level, and they're all nearly identical...Silver plans are not higher than the rest. It's possible that they're spreading the CSR load across every plan, but if so I'd guess they would've mentioned that.

They also include a nice table showing just how big a factor reinsurance is: They expect it to knock over $17 million off their total, or arounde...14.5%. It seems to me this should mean that their average rate change would be flat without reinsurance (as opposed to the 9.4% listead above), though...perhaps that's the CSR factor after all? I'm not sure, frankly: 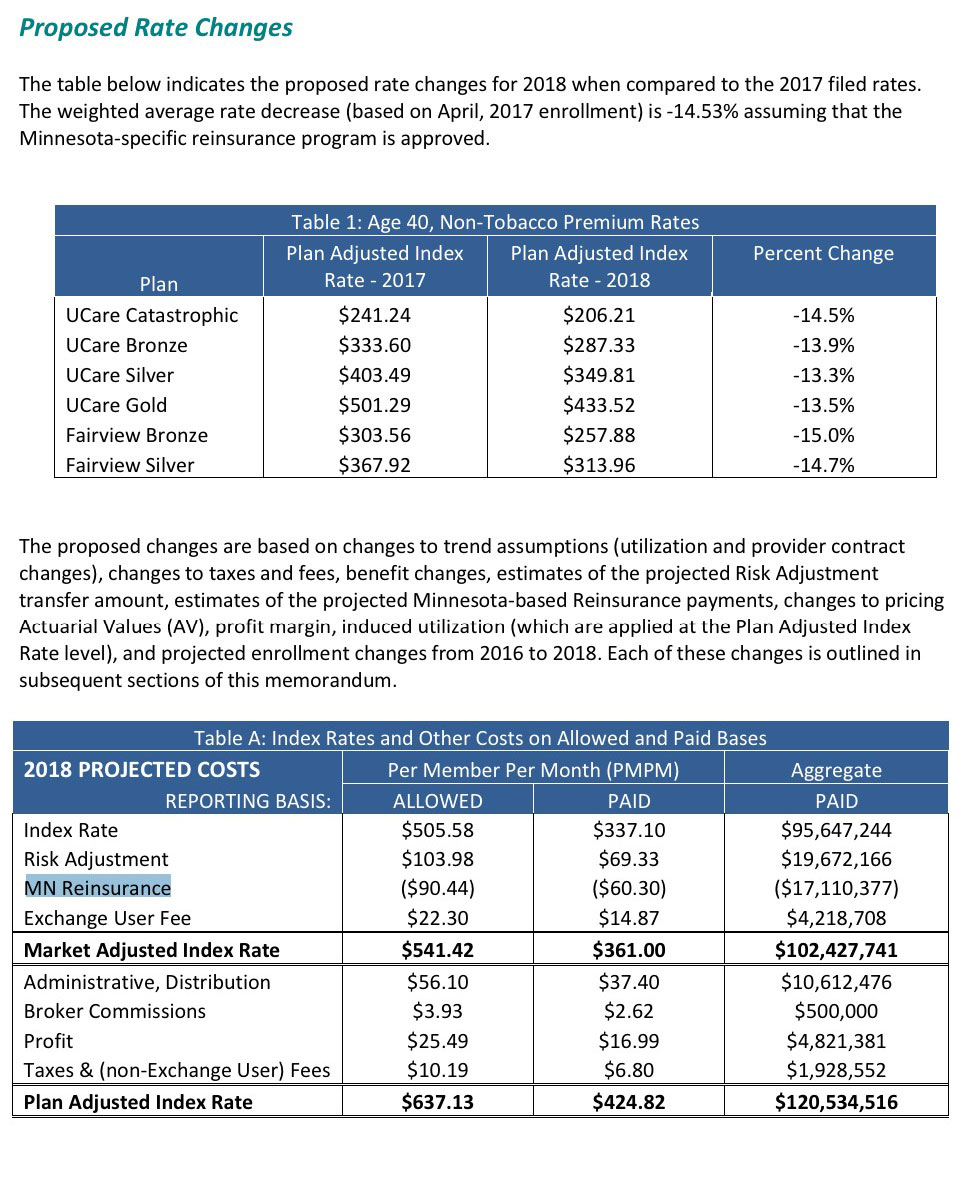 SAINT PAUL – Minnesotans can now see proposed 2018 rate information submitted by Minnesota insurers to the Minnesota Commerce Department for individual health insurance plans, including those that will be sold through MNsure.

All insurers that currently offer health plans in Minnesota’s individual market have filed rate proposals for 2018.

The insurers’ rate proposals, which are preliminary and must be reviewed by the Commerce Department, are available on the Commerce website (mn.gov/commerce). Also available are proposed 2018 rates for small group health plans that serve employers with 2-50 employees.

Final 2018 rates will be announced by October 2. The 2018 open enrollment period to buy health insurance begins on November 1 and is scheduled to continue through December 15.

The individual market rate proposals apply only to Minnesotans who directly purchase their own health insurance policies. Most Minnesotans receive coverage from employer-based insurance or public programs such as Medicare, Medical Assistance (Medicaid) and MinnesotaCare.

As of April this year, about 166,000 Minnesotans have coverage through the individual market.

This year, for the first time, insurers were required to submit two sets of proposed rates: One set with, and one set without, a new state reinsurance program.

Earlier this year, Minnesota enacted a law to create the Minnesota Premium Security Plan. This reinsurance program is designed to help stabilize premiums in the state’s individual market, providing a financial backstop against especially high-cost claims.

Implementation of the reinsurance program is contingent on federal approval, which is pending. The state's application for what is known as a 1332 waiver application was submitted by the Commerce Department to the U.S. Department of Health and Human Services.

“To date, we have received positive feedback from federal officials to get their approval for the reinsurance program,” said Commerce Commissioner Mike Rothman. “We are still waiting to receive that approval and hope federal authorities decide by the end of August in order to help finalize the lower rates with reinsurance for 2018.”

Despite uncertainties about potential Congressional action on health reform, the Commerce Department instructed insurers to prepare their rate proposals based on existing federal laws and regulations that currently apply for 2018.

On behalf of Minnesota consumers, the Commerce Department will conduct a rigorous, thorough rate review of each insurer’s rate proposal.

Rates must be justified both by the benefits that consumers receive for their premiums and by the insurance company’s ability to pay expected medical claims costs based on premium revenue.

Insurers must also comply with state and federal laws that protect consumers, including coverage for pre-existing conditions and free preventive care, the adequacy of the provider network and the procedures an individual must follow to enroll or have a claim paid.

As part of the rate review process, the Commerce Department is accepting public comments on the insurers’ 2018 rate proposals through August 31. Minnesotans can submit comments to healthinsurance.ratecomments@state.mn.us.