BOISE ID – The Idaho Department of Insurance has posted proposed health insurance premium rates and the requested increases for plan year 2018 on its website, http://www.doi.idaho.gov/company/ratereview/. Health insurance carriers have submitted their rating information including justifications as well as rating areas. The Department will continue to review the insurance carriers’ submissions. The Department’s only authority is to determine the rates “unreasonable” if the requests do not meet the justification. In past years, the Department has successfully negotiated lower rate increases with carriers to avoid labeling them “unreasonable.” Final rates will be publicly available by mid-September or early October. 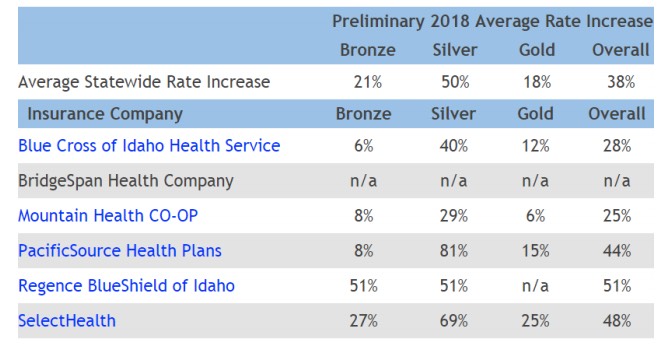 “I am deeply disappointed and frustrated to share these rates,” said Department Director Dean Cameron. “I understand how difficult it will be for Idahoans to afford reasonable coverage, especially those without a subsidy.” The Department encourages consumers to carefully review all of their options with a licensed insurance agent whether purchasing coverage on or off the exchange (Your Health Idaho) once the final rates are published.

The proposed increases for Silver level plans on the exchange are significantly higher this year, even more than the increases for Bronze or Gold level plans, due to the potential refusal by the federal government to fund the Cost Share Reduction (CSR) mechanism. The CSR requires insurance carriers selling plans through Your Health Idaho to lower deductibles and out-of-pocket maximums on Silver plans for enrollees who earn below 250% of the federal poverty level. “I call on Congress to either repeal the CSR requirement or fund the program,” said Director Dean Cameron. “That action alone would reduce the proposed increase by at least 20% on the Silver plans.” The premium requests for the Silver level plans reflect the cost of the CSR benefits since the carrier is still obligated to provide the benefits regardless of whether or not the program is funded at the federal level.

The proposed increases to Silver plan premiums would also result in an increase in advanced premium tax credits (APTC) for those eligible and purchasing coverage through Your Health Idaho. Individuals who are not currently receiving APTC are reminded to check for eligibility again this year. “Ironically, Congress may spend more of our federal tax dollars through higher APTC’s than if they funded the CSR mechanism,” said Director Cameron. The Department recommends that all individuals work with a licensed insurance agent to choose the best plan based on their needs.

Department of Insurance seeks comments and assistance from the public

“The proposed rate increases demonstrate the need for changes to the federal law. Idaho’s congressional delegation has been responsive and responsible, but we must help them deliver the message to their colleagues,” said Cameron. “If congress is unable to repeal or replace, I ask that they do the following three things at a minimum to stabilize the market and reduce rates:

The first bullet point is a bit confusing; it makes it sound like the "20% savings" would be across all metal levels, but the rate hike table and text below it clearly indicates that the 20% only applies to Silver plans. They've already provided the weighted average including the full #TrumpTax effect (38% overall), so that just leaves figuring out what rates would be without the CSR factor.

In order to get an overall 38% weighted average increase, the market share breakout between metal levels must be something close to 36/59/5 between Bronze, Silver and Gold. By plugging these in, and then knocking 20 points off the Silver plans only, the non-CSR factor shows up as well....26.2%:

However, again, there's also the Mandate Penalty enforcement factor...listed in some filings as "increased morbidity" (that is, without the mandate being enforced, they expect fewer healthy people, therefore a worse risk pool). Regence BlueShield lists morbidity as being responsible for a whopping 18 points of their 46% increase request, while Mountain Health Co-Op has morbidity down at only 5 points. Other carriers don't really call out a specific number: 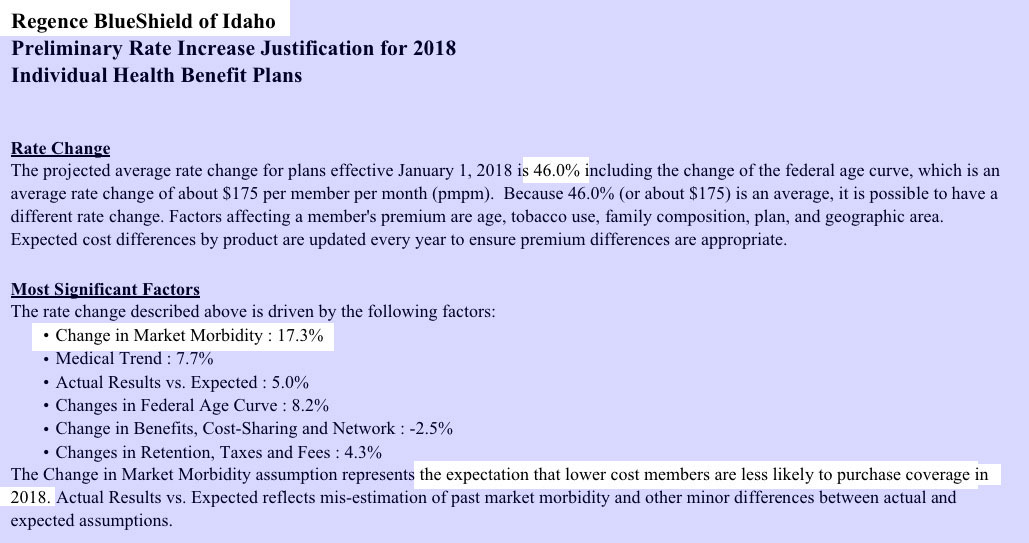 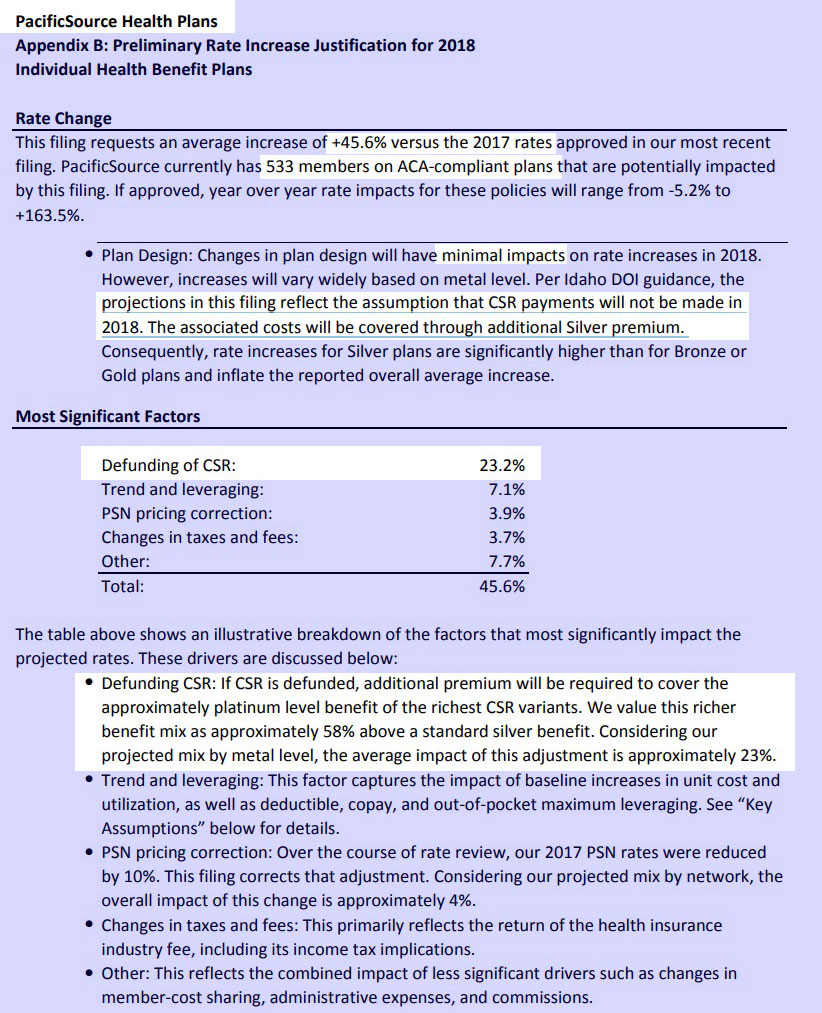