Normally I don't post my Rate Hike Project analysis for a state until I have rate filing data available for all (or nearly all) of the individual market enrollees on hand.

I'm making an exception in the case of Michigan, however, because a) it's my home state, and b) My wife, son and I happen to be enrolled in an ACA exchange policy ourselves, via Blue Care Network (the HMO division of Blue Cross Blue Shield of Michigan).

Unfortunately, as of today (6/13) only one carrier has submitted their 2018 rate filing for the ACA-compliant individual market...and it's BCBSMI itself. That is, the PPO division of Blue Cross, not the HMO division.

Some states are officially requesting that carriers submit two rate filings: One which assumes Donald Trump and the GOP will make good on the CSR payments legally owed to carriers, and one which assumes they won't. It's important to note that while the CSR issue is by far the most obvious Trump/GOP sabotage stunt at the moment, it's not the only one. The second major issue is more vague but just as costly (if not potentially more so): The "Individual Mandate Enforcement" factor. Unfortunately, while some carriers in other states have called the Mandate Enforcement factor out as well, in Michigan it appears that only CSRs are being separated out.

The first screenshot refers to this bulletin from the Michigan Dept. of Insurance/Financial Services, which lays it on the line: 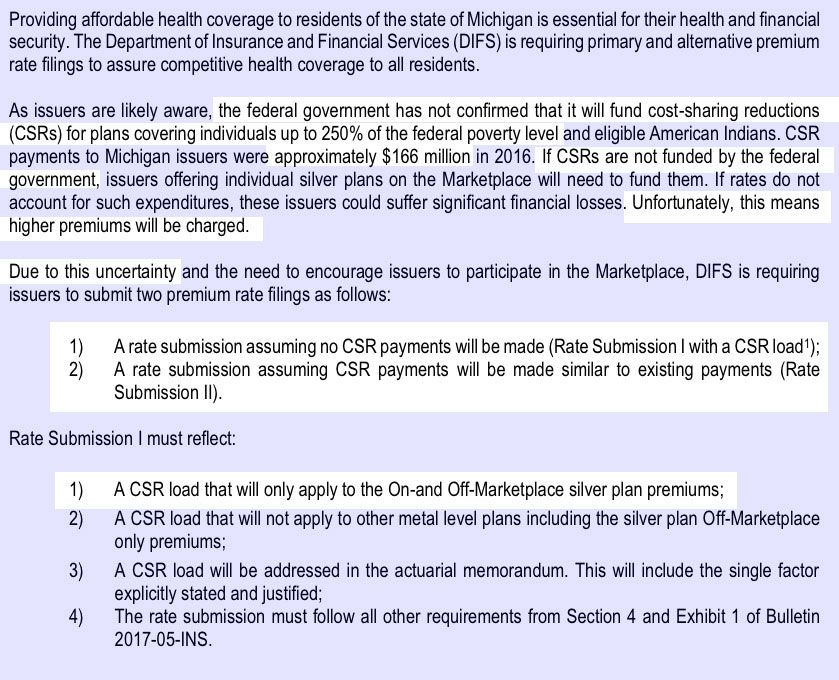 It looks like August 16 is the deadline date for whether the CSR sabotage TrumpTax will or won't be included (at least in Michigan...this date might vary for other states, though I can't imagine it'd be much later than that): 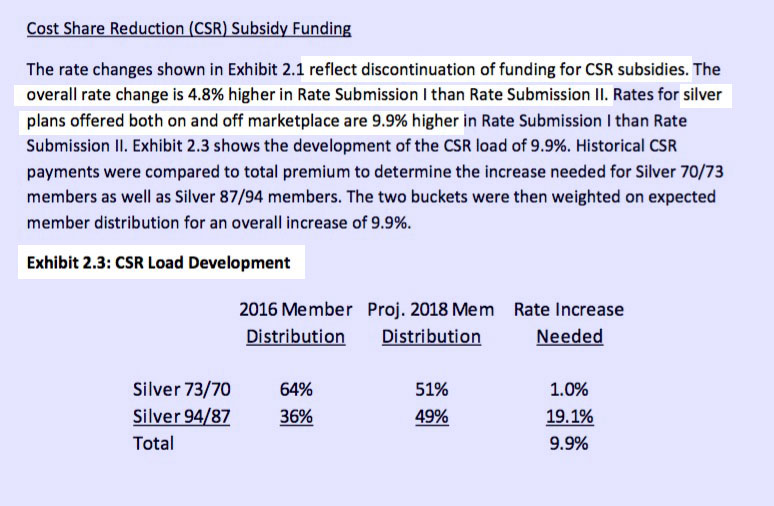 With that in mind, here's the bad news: For Blue Cross Blue Shield of Michigan individual PPO plans, they're requesting the following rate hikes for 2018:

Unlike other states like North Carolina and Pennsylvania where the CSR factor alone accounts for up to 75% of the "TrumpTax" requests, in this case it only makes up about 15% of the total (4.8 percentage points).

Of course, this could vary widely for BCBS's HMO plans, which make up a much larger portion of enrollees. My guess is that Silver plan enrollment is much higher proportionately in HMOs than PPOs, which would mean CSRs have a higher impact on total premiums, but I could be wrong. And of course it could vary for other Michigan carriers as well. 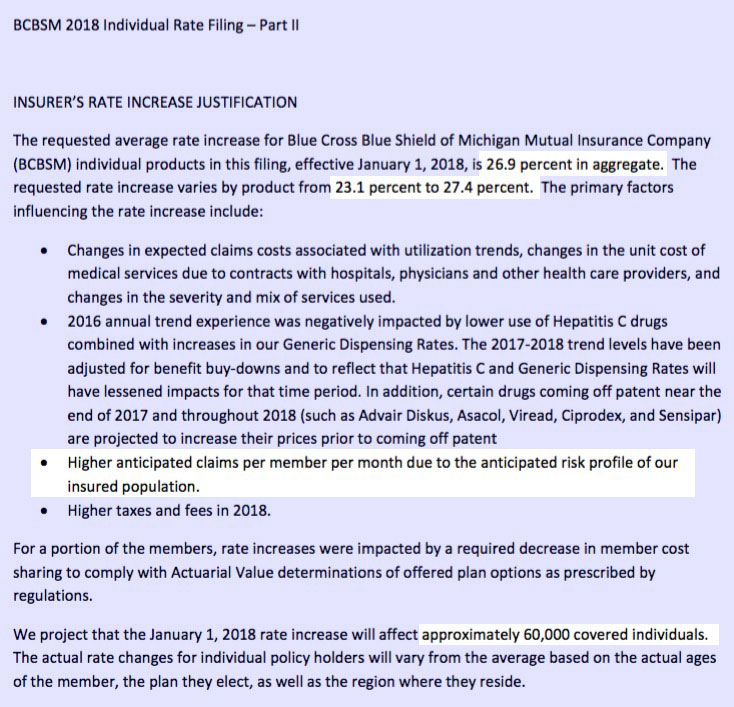 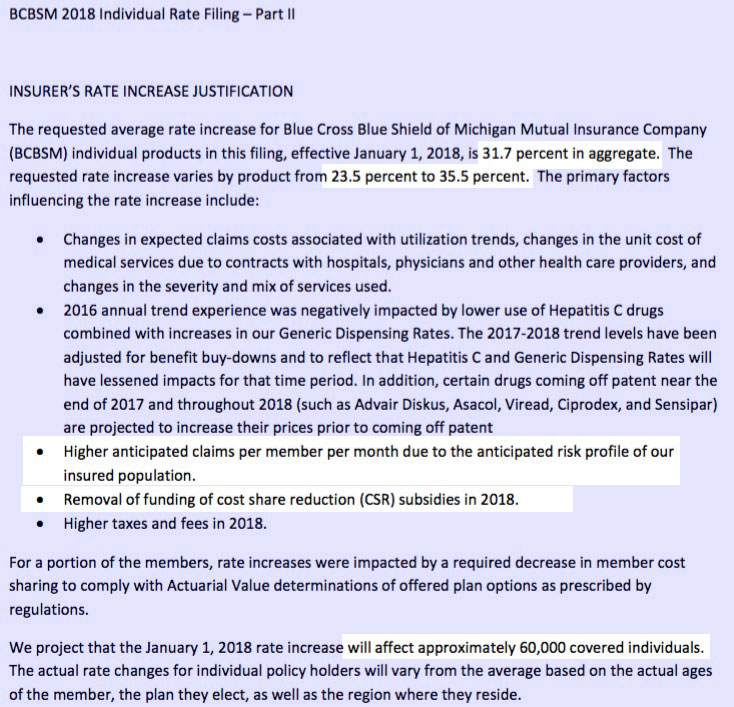 UPDATE: OK, I've dug up two more key Michigan filings: One for Blue Care Network, one for Molina. Frustratingly, both of them are the "CSR TrumpTax" versions only...I can't find the versions which assume CSR payments will be made: 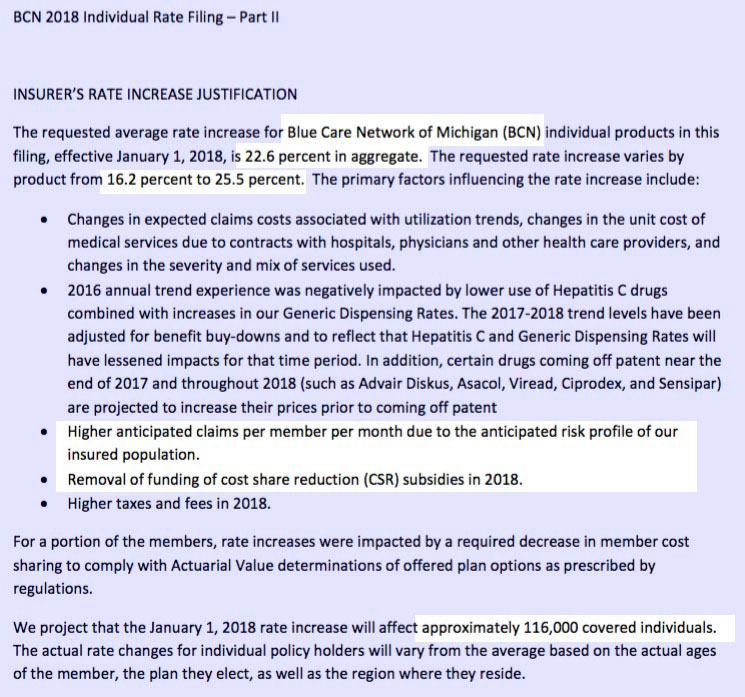 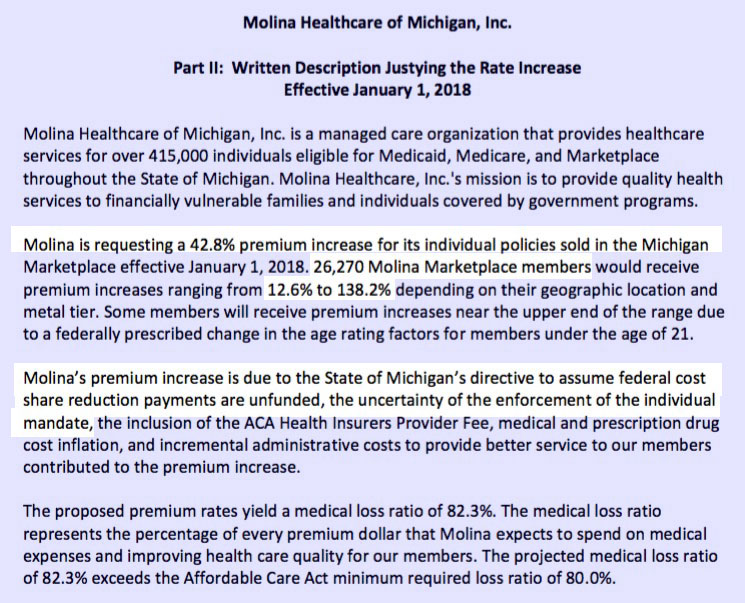 UPDATE: Here's Molina's filing assuming CSRs are paid (but note that they still call out the "individual mandate enforcement" factor): 19.3%. 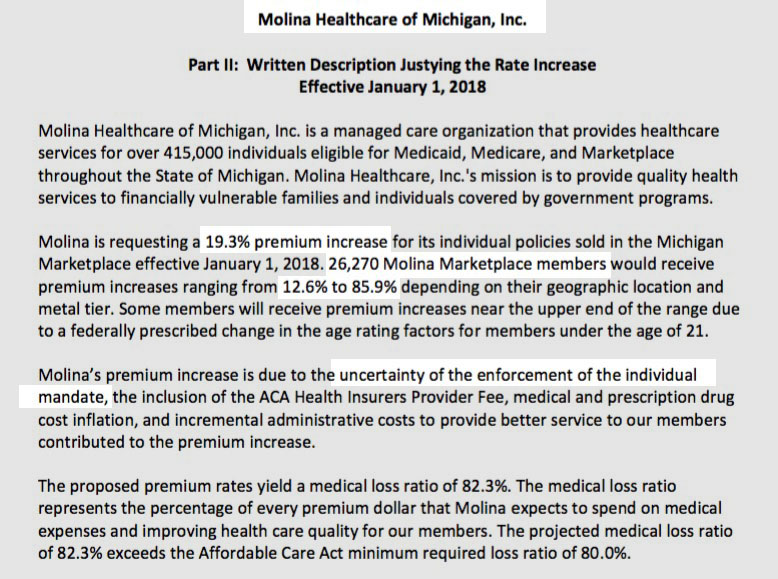 IMPORTANT UPDATE: Nice find by David Anderson; apparently buried in the various filing forms is this table in which Molina clearly states that a full 9.5 percentage points of their rate hike request is due specifically to concerns about the Trump Administration not enforcing the individual mandate (or more specifically, people thinking they won't enforce it due to Trump's executive order on his first day in office basically telling the HHS Dept. not to do so): 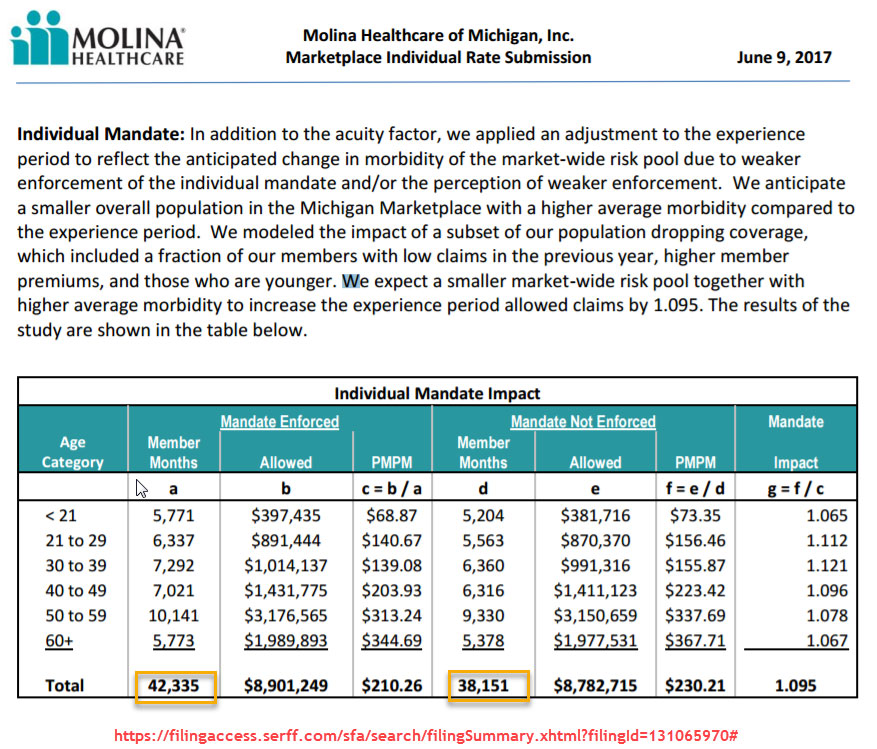 That means that Molina's "No TrumpTax" hike request is actually only 9.8%

The problem is that while many carriers are breaking out the CSR Sabotage portion of their rate hikes, the Mandate Enforcement factor is only broken out sporadically, and doesn't appear to be required by any state directives. This means that the "No TrumpTax" column in the 2018 Rate Hike tables is still underestimating the impact of the Trump/Price/GOP F.U.D. factor in many cases...but I have way of knowing which ones.

UPDATE: I've dug up this filing from Alliance as well (switched to red for no reason). Curiously, this one doesn't say anything about CSR payments one way or the other...although the bulletin was posted on June 1st, so it's possible that this was submitted prior to that and will be revised: 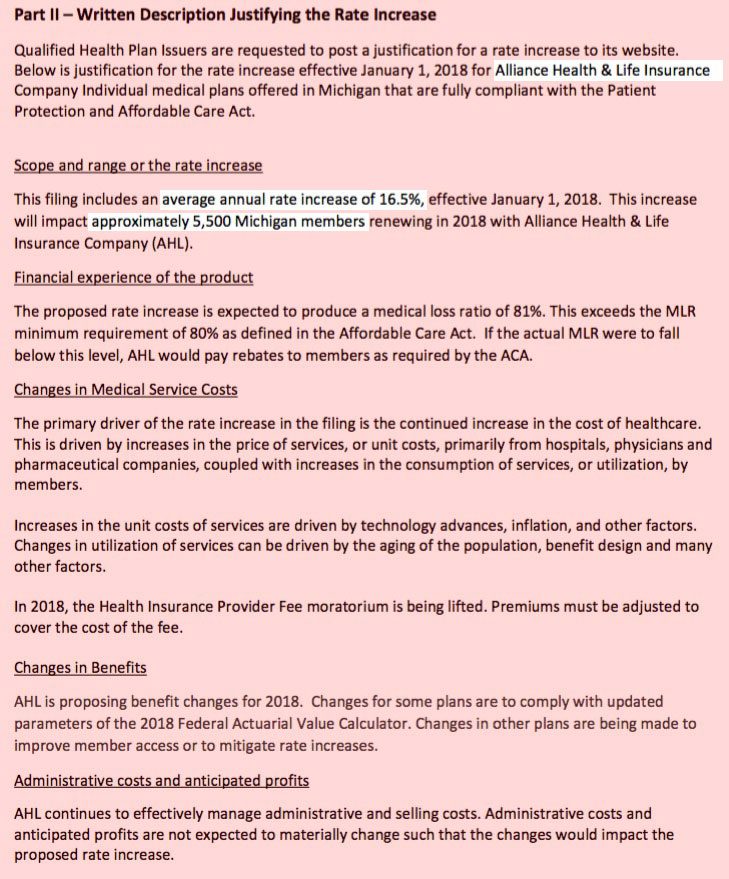 UPDATE: OK, most of the other filings appear to have been uploaded over the past few hours: Health Alliance Plan doesn't specify whether this is with or without CSR payments: 24.0% for 17,000 people: 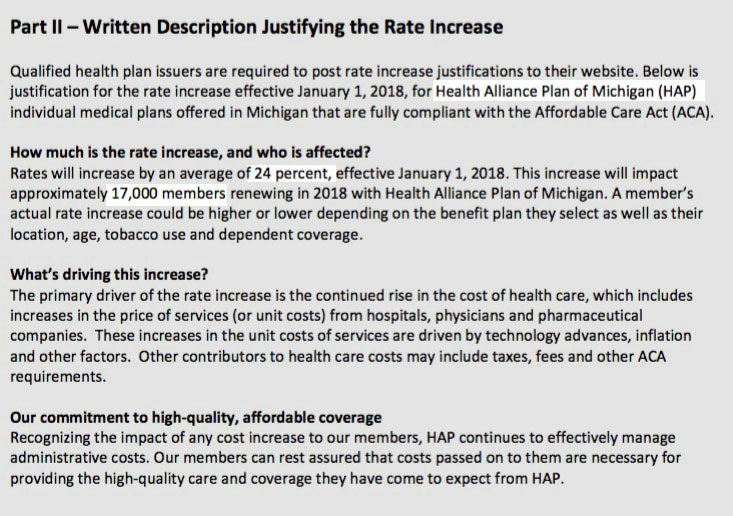 Meridian only has one filing but breaks out the CSR and related factors for their 6,319 members: 59.4% with the CSR TrumpTax, around 11.5% without the CSR TrumpTax. That's not 100% accurate because the 37.9% tacked on only applies to Silver plans, so it's partly diluted when you include Bronze, Gold and Platinum plans...but Silver plans generally are something like 70% of the total anyway, so until I have a more specific breakout, I'm going to plug 11.5% in for Meridian: 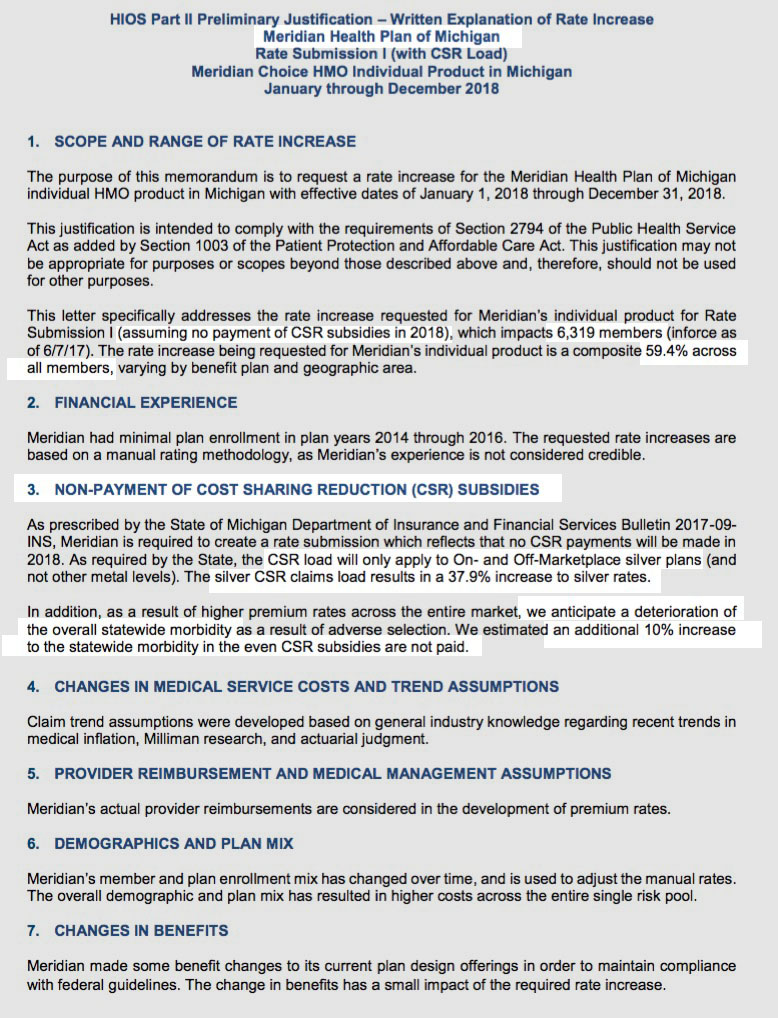 OK, the Detroit Free Press has some additional numbers which fill in some of the blanks:

Blue Cross Blue Shield of Michigan, the largest insurer in the state, says it is looking to boost its individual plan rates by a statewide average 26.9% and an average 13.8% for Blue Care Network HMO plans.

Those spikes could be even higher —  31.% and 22.6%, respectively — if Republicans in Washington opt to defund cost-sharing subsidies in the ACA for helping lower-income people with medical costs.

OK, that fills in the BCN No-CSR number for me.

Health Alliance Plan has asked to raise individual plan rates 16% to 24%, depending on cost-sharing subsidies. That increase would affect 17,000 HAP customers, according to its rate proposal.

Total Health Care, which insurers nearly 9,000 people on the individual market, is seeking average rate increases of 27.6%, according to filings that assume the cost-sharing subsidies will end.

....Humana, which has insured about 20,000 people in Michigan on individual plans, recently announced that it will stop offering individual plans here and in the other 10 states where it currently does, citing "an unbalanced risk pool."

I'm still missing a few carriers. MI has over a dozen carriers, and I estimate our total ACA-compliant individual market at around 400,000 people; in addition, I can't find the Alliance "no TrumpTax" rate request. However, Alliance only has around 5,500 enrollees, so that should have a nominal impact on the weighted average anyway. When you add Humana's 20,000 enrollees into the mix (they're leaving the market), that should account for a good 93% of the market; the hike requests for the missing carriers would have to be considerably higher or lower than the averages below in order to move the needle much:

UPDATE: Thanks to Louise Norris for the heads up; apparently there have been a few tweaks to some of the filings, and a 10th carrier (Physicians Health Plan) slipped in at the last minute. Nine of the carriers are on the exchange, one is off-exchange only (Alliance Health & Life).

With these changes, here's what things look like...aside from adding Physicians, the biggest change is that I've dropped Blue Care Network's "NO TrumpTax" rate hike by 5 points based on their own words: