This is doubly confusing since previously Molina was the carrier screaming the loudest about locking in CSR reimbursements, to the point of issuing an ultimatum to the Trump Administration over the issue. Then again, the Molina Board of Directors promptly fired their long-time CEO for doing so less than a week later, so I guess that says it all.

CHRISTUS is asking for an ugly 49.2% increase, but makes it pretty clear that this assumes the worst (full Trump Tax).

Finally, there's New Mexico Health Connection...which is, by the way, one of the few remaining ACA-created Co-Ops still around. NMHC's filing is confusing: The NM website database lists a jaw-dropping 84.9% average rate hike request...but when I went through the filings, I found a newer version which lists their increase request as "only" 30.1% on average. There's no specific reference to either CSRs or mandate enforcement in either of the filings that I could see, but there's this quote from a Politico article last month:

It sounds like the older filing assumes the full Trump Tax while the newer 30% hike (not 10-20%) assumes that CSRs will be paid and the mandate will be enforced. I might be mistaken about this, but I'm going with it for the moment; I'll revise the table below if necessary.

In any event, once I add in Kaiser Family Foundation's 13% CSR sabotage factor estimate for New Mexico, it looks like NM carriers are seeking a 24.2% rate hike with no/partial Trump Tax or an ugly as hell 48.9% hike with the full Trump Tax effect.

UPDATE: Hmmmm...OK, Louise Norris looked into the NMHC situation and confirmed that both the 30% and 84% filings assume CSRs will be paid, but also assume the mandate won't be enforced. They lowered it from 84% to 30% after confirming that the other carriers are all sticking around next year.

As for the NM small biz plans, I don't have a weighted average, but the unweighted average comes in at around 18%, which is unusually high for the sm. group market. 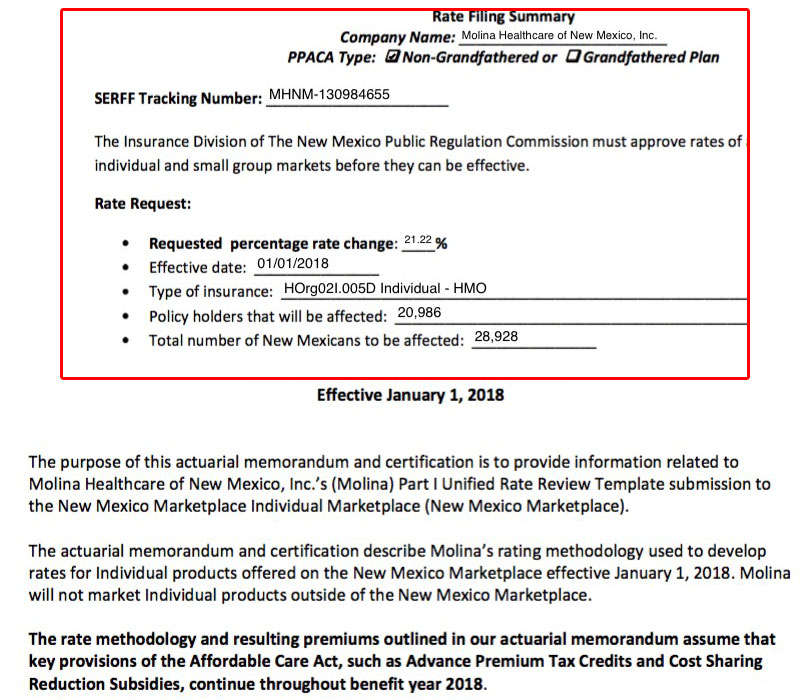 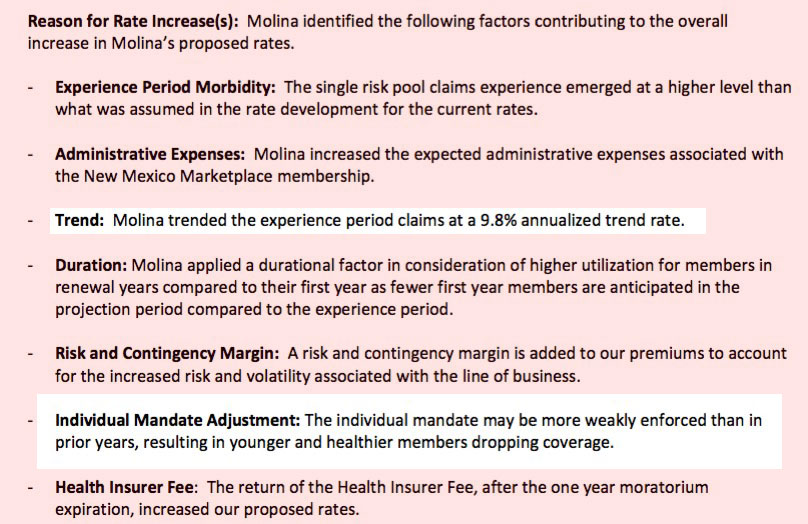 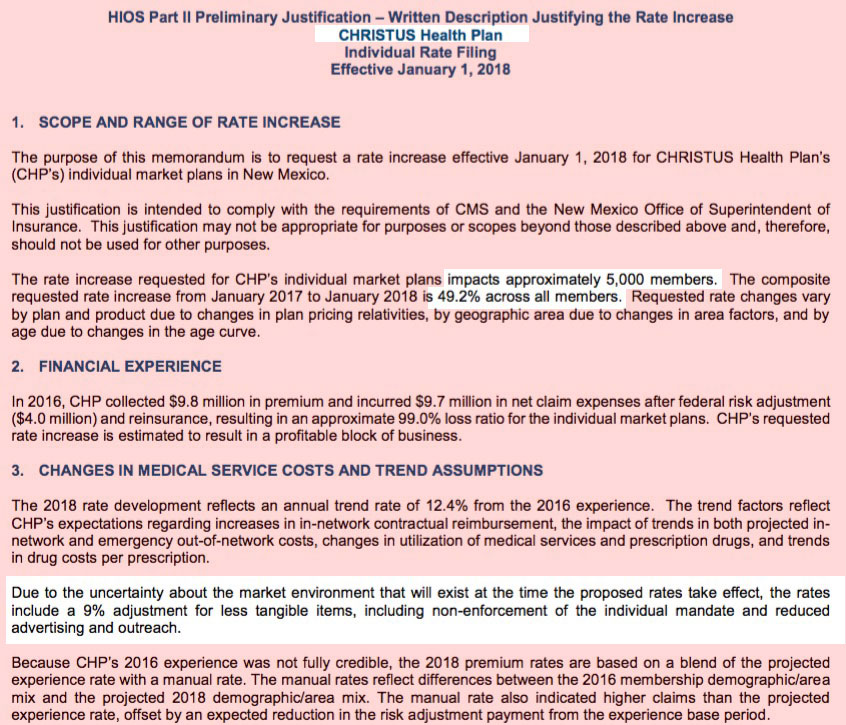 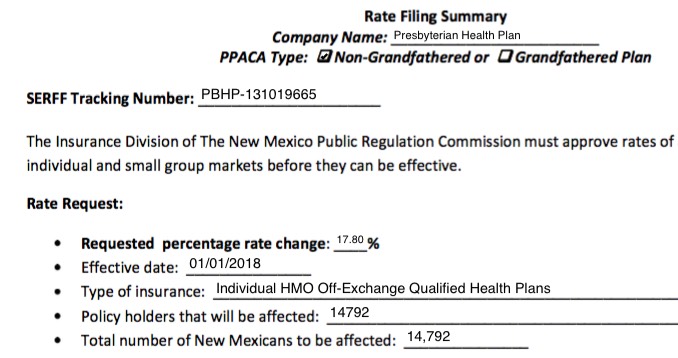 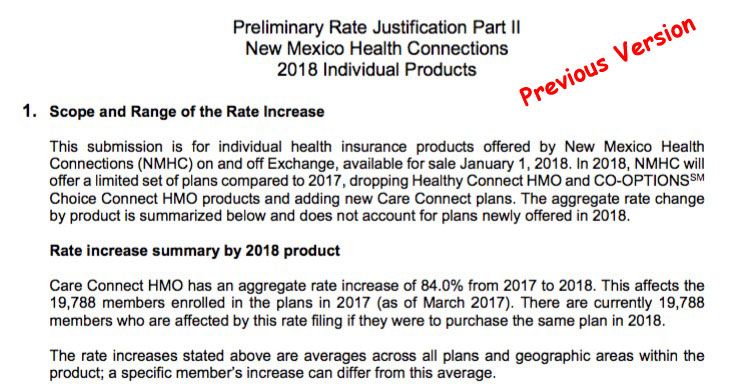 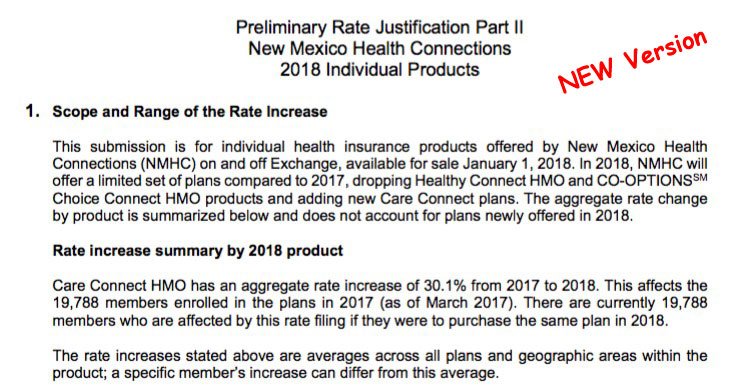 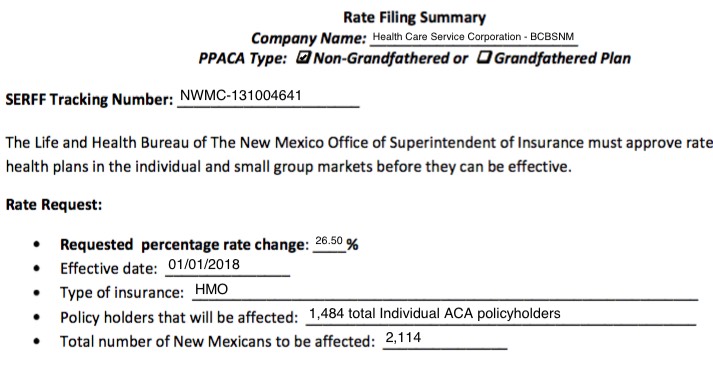