*UPDATE: FOR GOD'S SAKE PEOPLE, THE HEADLINE IS SNARK. THAT'S KIND OF THE POINT. SHEESH.

Only 10.3 million Americans are on the #Obamacare exchanges while 28.2 million have no insurance at all. We need relief now. pic.twitter.com/s4RRoRGJlF 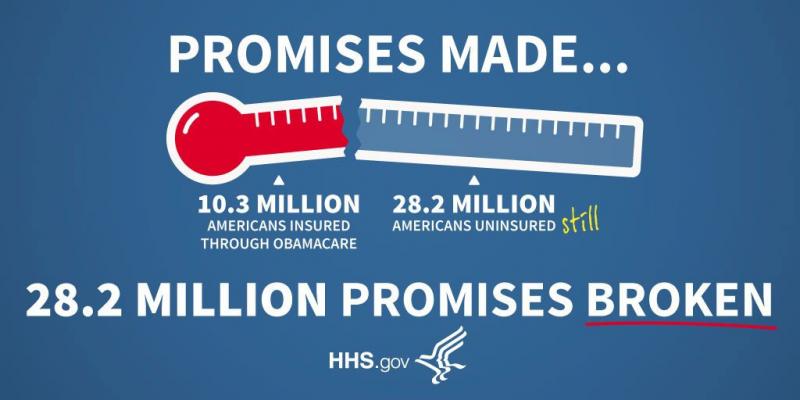 How many things can you find wrong in this picture?

According to the Kaiser Family Foundation. in 2016 there were a total of around 27.2 million uninsured American residents. Price's 28.2 million figure is 1 million higher; I'm willing to give that to him, since it's possible that Kaiser's estimate is off a bit or that the number has inched back up a bit over the past year. Fair enough.

I have no problem with this, of course, but it's a bit of an eyebrow-raiser given the views Donald Trump and his supporters have of undocumented immigrants.

In other words, Donald Trump's HHS Secretary, Tom Price, is effectively now promising that Trumpcare will, in fact, provide healthcare coverage for 5.4 million undocumented immigrants. After all, Trump himself did promise, emphatically, that "everyone" will be covered under his plan. Not "most" people, but "everyone".

Again, I'm totally on board with this, but I suspect Trump's supporters won't be too keen on that idea. The ACA cannot legally provide healthcare coverage assistance to undocumented immigrants. They aren't allowed to enroll in Medicaid, for instance, nor are they allowed to enroll in ACA exchange policies even at full price.

4. But let's look at that "10.3 million insured through Obamacare" claim. This, of course, comes from the recent CMS report claiming that of the 12.2 million people who signed up for ACA exchange policies as of 1/31/17, only 10.3 million of them had actually paid their first monthly premium and were still enrolled as of March.

As I noted at the time, however, CMS deliberately only included enrollees whose policies went into effect as of FEBRUARY, not March. Around 500,000 people enrolled between 1/16/17 - 1/31/17, and their policies didn't go into effect until March 1st. This means that the 10.3M figure is likely at least 430,000 enrollees shy.

5. More importantly, the 10.3 million figure ignores the 15.6 million or more people enrolled in Medicaid via ACA expansion. Republicans love playing this semantics game by trying to pretend that Medicaid "doesn't count" as being "health insurance" because the enrollees generally don't pay more than a nominal premium (if any). This is stupid, but it's a thing of theirs.

6. The 10.3 million figure also doesn't count the 765,000 people enrolled in Basic Health Plan policies across New York ("Essential Plan") and Minnesota ("MinnesotaCare"), both of which are funded by the ACA (MinnesotaCare existed pre-ACA but was retooled afterwards).

Oh, and before you ask: No, I'm not saying that 27.1 million people are newly insured via the ACA; that number is still closer to around 22 million...because roughly 5 million of the 27.1 million did have some form of healthcare coverage prior to the ACA, including my own family.

7. Meanwhile, assuming Sec. Price didn't intend to define "undocumented immigrants" as "Americans", what he should have said is "22.8 million Americans still uninsured".

8. Furthermore, according to the Kaiser study, an additional 2.6 million of those folks are caught in the Medicaid Gap specifically becaus Republican Governors or state legislatures refuse to expand Medicaid under the ACA across 19 states.

This is the very definition of chutzpah: They refuse to expand Medicaid under the ACA, then blame the ACA for not covering them.

9. Subtract those 2.6 million and you're left with around 20.2 million who could even conceivably be covered under the ACA under ideal circumstances.

10. Which takes us back to the "promises broken" part of the graphic. The implication is that Obamacare supposedly "promised" 100% universal healthcare coverage, which is nonsense. Whether it should have is a different discussion, but no, it never did any such thing. The goal was to reduce the uninsured rate as much as possible, but the ACA never promised to completely wipe it out.

Proof? Here's the March 2010 CBO score of the ACA (remember, this was from 2 years before the Supreme Court ruled that Medicaid expansion was up to the individual states): 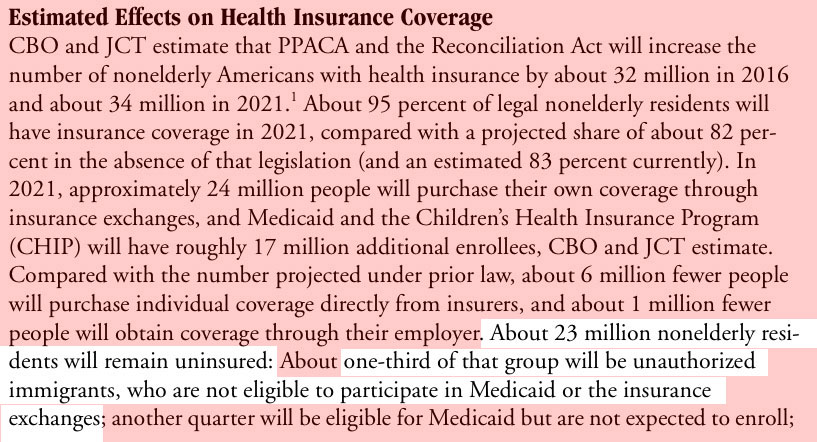 Obviously the CBO projections were off on a few things; aside from the then-unknown Medicaid Gap factor, exchange enrollment is a lot lower than expected, while employer-sponsored insurance is actually up a couple million thanks to the economic recovery. The point still stands, however: The CBO never projected the ACA to achieve 100% universal coverage, and even at its most optimistic still assumed that there would still be around 23 million Americans still uninsured as of 2021.

Again, this was long before the 2012 SCOTUS Medicaid ruling, the 2014 Risk Corridor Massacre (courtesy of Marco Rubio), the ongoing obstruction of ACA navigators/etc. by various GOP officials, the blatant lies about "death panels" and the like which scared people out of enrolling, not to mention the current CSR reimbursement and individual mandate enforcement sabotage being pushed to the limits by Trump, Price and the GOP.

Once you add all of those into the mix, I'd say the ACA has actually done pretty damned well in terms of expanding coverage, all things considered.

In short, here's a corrected version of Sec. Price's graphic: 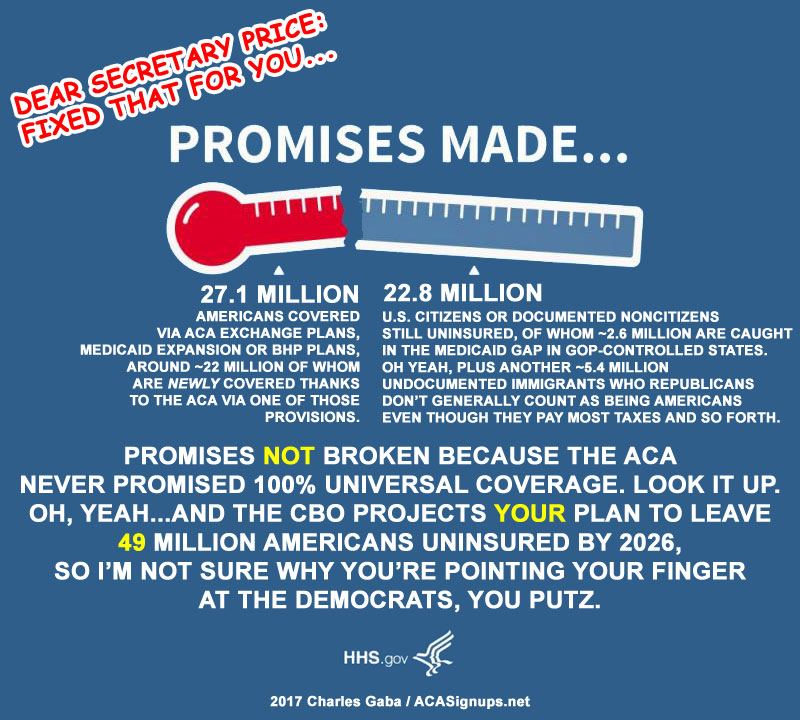