As of today, I'm unable to find any 2018 rate filings on the official NC Dept. of Insurance SERFF database, but that's OK...BCBSNC just posted their filing info on their official corporate blog, and since they're the only carrier with any significant presence on the state's individual market anyway, that's really all I need. I'll add Cigna's rate filing request in as soon as I'm able to find it, but they're only offering exchange policies in 5 counties to my knowledge (Chatham, Johnston, Nash, Orange and Wake), so I presume that their market share isn't much higher than it was last year, meaning that whatever their request is, it's unlikely to move the needle much at all.

(OK, strike that' it turns out that Cigna actually has over 21,000 indy market enrollees this year, so it's a small but decent-sized chunk of the market).

With that in mind, here's what BCBSNC has to say...and they're surprisingly candid about not just how much of a rate increase they're looking for, but the exact breakout of the reasons why:

Two weeks ago our CEO, Brad Wilson, wrote about the future of the Affordable Care Act (ACA) and what it means for individual premiums in 2018. Today we’re following up by announcing the proposed rates we’ve filed for ACA coverage next year in all 100 North Carolina counties.

Our ACA customers will receive an average rate increase of 22.9 percent for coverage purchased on and off the exchange. That’s according to our proposal filed with the North Carolina Department of Insurance for their review and approval. The increase is a little less than last year’s approved rise of 24.3 percent for this year’s coverage.

In our view, with so many North Carolinians struggling to afford health care, the 2018 increase is still too steep. But higher premiums are necessary because key federal funding for health coverage appears to be going away. Other reasons for the rate increase include a tax on health insurers under the ACA that’s scheduled to go into effect in 2018, as well as the higher costs of covering medical claims.

One important point about our 2018 rate filing: While our intent at Blue Cross NC is to offer exchange plans next year, simply filing rates does not guarantee it. We’ll continue to evaluate the market and make and announce a final decision this fall.

The biggest single reason for the sharp increase in rates is the lack of federal funding for “cost-sharing reductions” beginning in 2018. This is the program that helps lower-income ACA customers pay their out-of-pocket costs, such as deductibles and copayments.

Congress must authorize and provide funding for cost-sharing reductions, which amounts to about $7 billion annually. In a federal lawsuit filed last year, the House said the payments weren’t authorized.

Boom. No beating around the bush (although it fails to specify that it was Congressional Republicans who filed the lawsuit). Congress filed the lawsuit which has put CSR payments at risk; it's up to Congress to authorize the payments, end of story.

A much smaller but still significant portion of our proposed rate increase is to account for a health insurer tax established under the ACA. Health insurers have had to make payments on this tax since 2014.

Thanks to a one-time tax “holiday” approved by Congress two years ago, this tax wasn’t paid in 2016. This meant that 2017 ACA customers benefitted from a slightly lower premium increase. The tax holiday has now ended, and premiums will be slightly higher next year as a result.

I believe the ACA's carrier tax amounts to roughly 2-3% of premiums. Normally it would already be baked into the cost, but since it's being reinstated, it's a separate "increased cost" line item this time around.

Another rate increase above 20 percent is a tough message to deliver to customers who depend on the Individual market for health care coverage. The good news is that federal subsidies will again help lower premiums for customers in 2018. In fact, most of our ACA customers may see little to no premium increase in 2018. Many may even see a decrease depending on their financial situation.

Still, cost-sharing reductions have a big impact on North Carolinians. That became clear to our actuaries as we looked at proposed rates for 2018. If the federal funding continued, we would have filed an average increase of just 8.8 percent for 2018.

That’s a difference of almost 14 percentage points – similar to what’s happening across the nation. A recent analysis by the Kaiser Family Foundation said that the average Silver plan premium would be 19 percent higher without cost-sharing reduction payments to insurers.

Boom. No equivocation: BCBSNC is specifically pinning at least 60% of their total rate hike request on Trump/the GOP's refusal to simply fund the damned CSR reimbursements which are a) legally owed to the carriers and b) only at risk because the GOP filed a lawsuit over the issue.

If you look past the questions about cost-sharing reductions, you can see that the ACA market in North Carolina has become more stable. Blue Cross NC has a better handle on expected medical costs among ACA participants in our state, which include our company’s 502,000 customers for 2017. An increase of 8.8 percent for next year would have been our lowest proposed rate increase since beginning ACA coverage in 2014. Further, the rate increase filed could have been another 3 points lower had the health insurer tax been waived again.

In other words, with the right actions coming out of Washington to stabilize the market, the rate increase from Blue Cross NC would have been between 5 percent and 6 percent. That looks a lot different from the 22.9 percent we filed.

I'm not so sure I agree with them on the carrier tax issue, although it does seem a little silly to charge the carrier a tax on a policy when that tax is being used to fund the very same tax credits which are going to help pay for that policy. 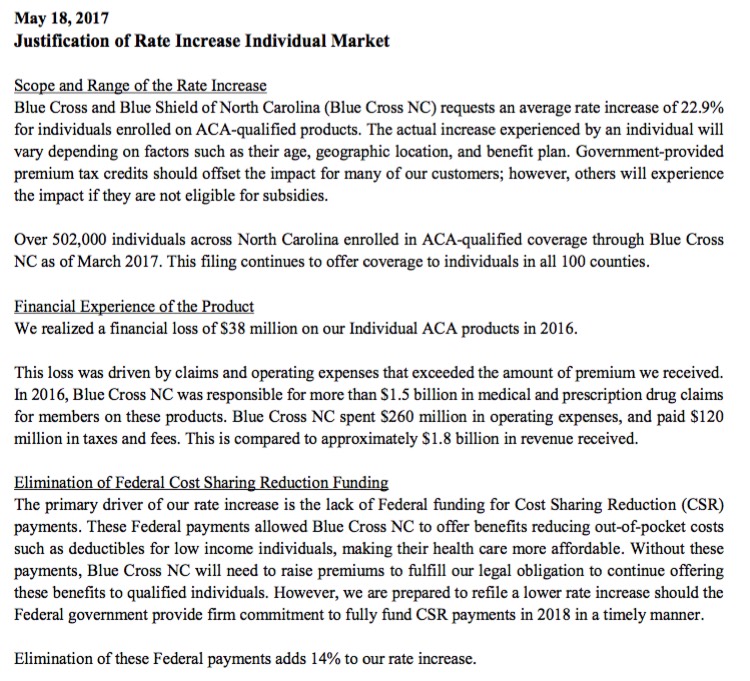 Not sure they could be any clearer than that.

The bottom line on BCBSNC's rate hike filing is this:

Thanks to @brendanlowbrow for helping me dig up the rest of the NC SERFF filings. First of all, Cigna is out next year, both on and off the exchange...at least for some products. It gets weird...for one thing check out the date on the letter (June 1st). For another, while they're discontinuing "OAP" plans (698 total enrollees), they're supposedly still offering "Individual Cigna Connect HMO" policies...except the second letter seems to indicate that they're completely pulling out of the NC market. Strange. In any event, assuming those 698 enrollees are part of the 1,200 or so from last year, that only leaves a couple hundred others, which wouldn't impact the statewide average anyway.

The "withdrawl" notices are posted at the very bottom of this entry. Weird.

When you include Cigna's 21.4K enrollees in the mix, the overall, unsubsidized, weighted average hike request comes in at 23.3% on the individual market. I'll add the small group market later on since I've already gone live with this and want to make sure it's accurate. 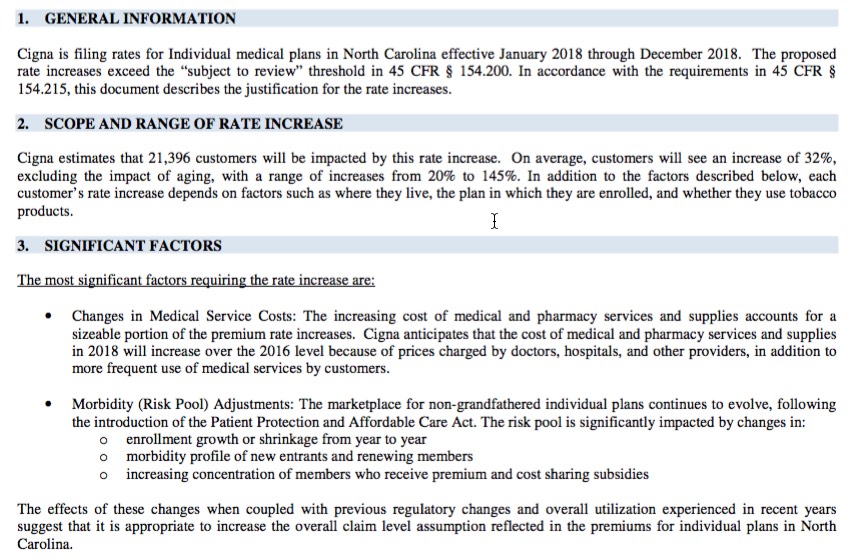 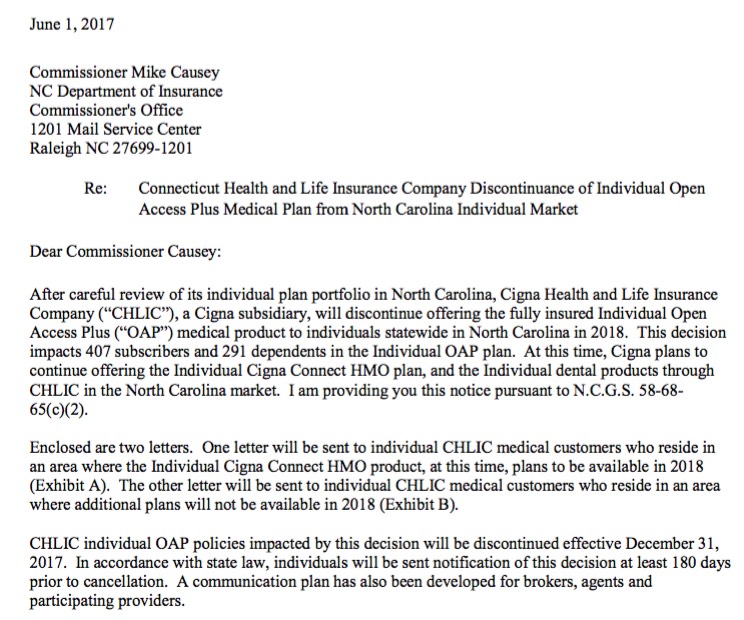 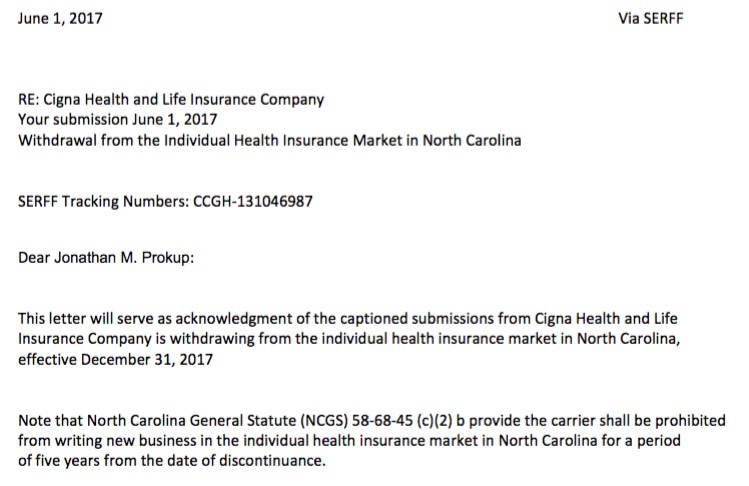 I'm also uploading a partially completed Small Group Market table...unfortunately, all three of the UnitedHealthCare filings have redacted their requested rate increases (although oddly enough they had no problem posting the number of covered lives...usually that's the harder number to track down). In addition, Blue Cross Blue Shield, which I assume has the lion's share of the small group market, has redacted both their rate hike request and covered lives, making it impossible to put together an accurate estimate. The other carriers range from 2 - 20%, so who knows?