As noted in my last post, it turns out that if the CBO score of the final version of the AHCA (that is, the one which passed two weeks ago) doesn't project the law to save at least $2 billion over a 10 year period, the House Republicans would have to start over again from scratch and re-vote on yet another version of their bill.

Now, the good news for them is that the CBO projected the prior version to save $150.3 billion over that period, so they have $148.3 billion worth of wiggle room, right? What are the odds of the CBO's new projection assuming that the passed version would eat up that much more money?

The key is does CBO assume lots of states waive benefits/community rating, and lots of healthy people use tax credits for skimpy insurance. https://t.co/vLx28MT5Bv

Here's what Levitt is talking about:

When the CBO scored the most recent version of the AHCA, they projected that over the course of the 10 year period from 2017-2026, the restructured tax credits (a simple formula ranging from $2,000 - $4,000 depending on your age alone, as opposed to the ACA's more complex formula based on a combination of household income, rating area, benchmark Silver policy premiums and age) would total around $357 billion between 2020 - 2026 (the ACA's current subsidy structure would stay in place until 2020).

However, that also assumed that every enrollee was in a plan which included full Essential Health Benefits and was community rated, just like they have to be under the ACA.

There were two major changes made to the AHCA in the final version which was actually passed by the House a couple of weeks ago: First, they added another $8 billion to help fund high risk pools, reinsurance programs and so forth. That immediately knocks the wiggle room down to $142.3 billion. Still plenty to work with.

More importantly, however, individual states would be allowed to opt out of the essential benefits and/or community rating provisions, which would effectively force millions of people with pre-existing conditions off of the individual market and into those theoretical high risk pools. This is one of the many things people have been screaming at the GOP about to no avail.

So. Let's suppose that none of the states were to put in for a pre-existing condition waiver. If that happens, then the AHCA would effectively be exactly the same as the prior verision. That is, it would still be horrific (24 million losing coverage, $880 billion in Medicaid funding wiped out, etc etc), but it wouldn't be any better or worse, aside from the extra $8 billion. If the CBO projects that no states get a waiver, that $140B cushion is pretty safe.

Under this scenario, the CBO assumes that the total number of people enrolled in the individual market relative to how many would otherwise be enrolled each year would drop off sharply the first few years, then gradually improve (again, still lower than under the ACA, but less dramatically), as follows: 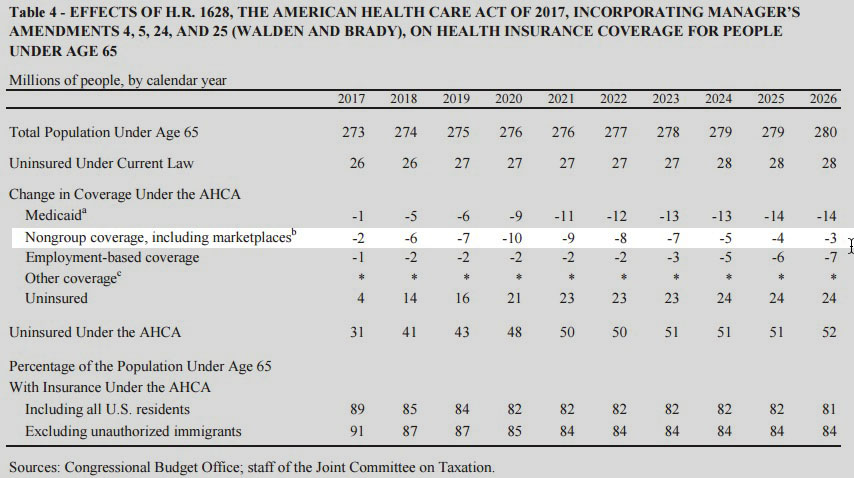 Now, I think that the CBO is using this report from March 2016 as their baseline for the above coverage changes; it's the most recent CBO projection I can find which pre-dates the Trump Administration taking office. As of right now, the total individual market stands at roughly 18 million people both on & off the exchange.

Under the AHCA not including the final version changes, here's how the CBO scored killing ACA subsidies and replacing them with AHCA flat subsidies: $663 billion saved, replaced by $357 billion spent on the new $2k - $4K flat tax credits. Note that the CBO is assuming here that the total individual market would plummet to around 9-10 million people total starting in 2020 (see above). Assuming an average tax credit of $3,000 per person, that adds up to around $29 billion starting in 2020, then rising from there as enrollment gradually increases.

HOWEVER, let's assume that every state put in for the waivers, all of which were approved. Supposedly, in a balanced risk pool, around 5% of enrollees are the truly high risk folks, racking up 50% of total healthcare costs. Another 5% eat up an additional 16% of spending. Let's assume that around 10% of the current market gets shunted off to the HRPs, leaving around 16 million in the AHCA individual market the first year (presumably bumped out to 2018, since we're already almost halfway through 2017 already).

Presumably, premiums would then drop somewhat for comprehensive plans (full EHB coverage) and a lot for stripped down (mini-med) plans.

So, what happens next? Well, remember, everyone would receive anywhere from $2,000 - $4,000 per year in tax credits; this amount remains the same no matter where they live, what their income is or, most significantly, how much the policy premiums are.

What happens to the millions of currently uninsured people who can suddenly get an (admittedly crappy) healthcare plan for free after the tax credit? Why, millions of them sign up as well! It may be a lousy plan, but it doesn't cost them a dime (or only a few bucks), so sure, millions of them go for it.

Under the ACA, this year, around 18 million people are in the individual market with 9-10 million receiving tax credits averaging around $383/month (roughly $40 billion per year in APTC assitance, plus another $7 billion or so for CSR enrollment. That's around $47 billion for ACA exchange subsidies.

Under the AHCA without the waiver option, the CBO projects that the government would start out paying only $29 billion in AHCA tax credits, for around (again) 9-10 million people.

But what happens if, say, 5 million currently uninsured people sign up for a virtually free low-end mini-med at $3,000 in tax credits a pop? Suddenly the cost balloons by an additional $15 billion per year.

Guess what? You just kissed that $140 billion in federal "savings" goodby in around 9 years.

Of course, this assumes all 50 states request a waiver. Some would, some wouldn't...but it's also possible that the number of uninsured people signing up for free mini-meds would be higher in the states which do so than I'm assuming. Or they could be lower. Again, there's no way of being sure, which is part of the reason it's taking the CBO so long to release their score of the final version.

Which states will ask for waivers? Well, we already know a few for sure: Governors Greg Abbott of Texas and Scott Walker of Wisconsin have already stated that they plan on doing so the moment it's allowed. I presume most of the other GOP-run states which still haven't expanded Medicaid would also do so, including Alabama, Florida, Georgia, Idaho, Kansas, Maine, Mississippi, Missouri, Nebraska, North Carolina, Oklahoma, South Carolina, South Dakota, Tennessee, Utah, Virginia and Wyoming. A couple of these might not since they have Democratic Governors (NC and VA), but you get my point: A good 1/3 of the country would likely put through waivers the first year, and other states might then be pressured to do so as well.

In short: The House Republicans have managed to paint themselves into a corner: The only way that the CBO score will allow them to move the AHCA onto the Senate exactly as passed is if the CBO assumes that only a few states actually implement the very waiver which they crammed into the bill in order to pass it in the first place.