And S&P said that while it expects insurers to ask for premium hikes for 2018, it also believes that "the average level of increase requested will be well below the 2017 hike" of 25 percent for a key type of Obamacare plans.

So, what's my takeaway from all of this?

Well, first of all, while the CBO is no longer projecting the individual market to grow over the next decade (they expect it to hover around the 20 million mark the whole time), they also aren't expecting it to shrink either.

Secondly, assuming the ACA somehow manages to survive the current carnage relatively intact after all, it looks like there's little point in continuing the original, core mission of this website. If exchange enrollments are expected to pretty much remain flat year over year, The Graph is likely to be pretty boring going forward, effectively a carbon copy each year. That doesn't mean I should pull the plug on the site, it just means that other features would take center stage.

...In CBO and JCT’s assessment, however, the non-group market would probably be stable in most areas under either current law or the legislation.

This is actually rather interesting. I expected them to call out “Death Spiral!” under Trumpcare…but the GOP has been insisting that the indy market is already in a Death Spiral, so this projection negates the “Death Panel!!” talking point from BOTH camps.

Under current law, most subsidized enrollees purchasing health insurance coverage in the non-group market are largely insulated from increases in premiums because their out-of-pocket payments for premiums are based on a percentage of their income; the government pays the difference. The subsidies to purchase coverage combined with the penalties paid by uninsured people stemming from the individual mandate are anticipated to cause sufficient demand for insurance by people with low health care expenditures for the market to be stable.

Under the legislation, in the agencies’ view, key factors bringing about market stability include subsidies to purchase insurance, which would maintain sufficient demand for insurance by people with low health care expenditures, and grants to states from the Patient and State Stability Fund, which would reduce the costs to insurers of people with high health care expenditures.

In other words: Under the ACA, unsubsidized premiums are projected to keep increasing, of course…but the tax credits would be higher to match for most people. Under Trumpcare, the tax credits would be lower…but some of the gap would be made up by the $100 billion “stability fund”, which amounts to funding for programs like High Risk Pools, Reinsurance and so forth. CBO is basically calling the market stability factor a wash.

In contrast to the dire pronouncements from President Trump and other Republicans, the demise of the individual insurance market seems greatly exaggerated, according to a new financial analysis released Friday.

The analysis, by Standard & Poor’s, looked at the performance of many Blue Cross plans in nearly three dozen states since President Barack Obama’s health care law took effect three years ago. It shows the insurers significantly reduced their losses last year, are likely to break even this year and that most could profit — albeit some in the single-digits — in 2018. The insurers cover more than five million people in the individual market.

After years in which many insurers lost money, then lost even more in 2015, “we are seeing the first signs in 2016 that this market could be manageable for most health insurers,” the Standard & Poor’s analysts said. The “market is not in a ‘death spiral,’ ” they said.

...It is unclear what [Trump] and Congress will do to fundamentally change the insurers’ projections for next year. While Mr. Banerjee predicted insurers would probably raise their prices only moderately next year, he said questions over whether there would be as much government financing could lead to much sharper increases. The companies appear likely to make money in 2018, but “there are external events that could stop that,” he said.

Under the Republican proposal, called the American Health Care Act, several provisions could upend coverage for a variety of customers, Mr. Claxton said. The insurers could be selling to a new group of customers, if lower-income customers lose the subsidies they now receive and cannot afford higher prices.

Mr. Claxton warned that there could be markets that would have no insurance companies offering coverage, particularly in rural areas where there were not many to begin with. “How to fix that was always going to be an issue,” he said.

...which brings us to the Kaiser Family Foundation, today:

...In 2015, as claims growth continued to outpace premiums, individual market MLRs increased again, to an average of 103%.

...It was not until last year that individual market loss ratios began to fall as insurers raised premiums faster than the rate of claims cost growth. 2016 was the first year that insurers had any meaningful data with which to work, though they were still setting premiums with only a partial year of experience (as 2014 open enrollment extended well into the year and insurers had to submit their 2016 premium in spring of 2015). Although insurers’ individual market performance improved on average in 2016, loss ratios remained relatively high. On average, MLRs fell by 7 percentage points from 2015 to 2016 to 96%.

...Assuming claims expenses do not rise unexpectedly, insures may significantly improve their financial performance in this market in 2017.

Though this can be taken as a sign that the market is stabilizing, health insurers still face tremendous uncertainty going forward. Mixed signals from the Administration and Congress over the direction and timing of ACA repeal efforts, and a lack of clarity on individual mandate enforcement and payments for cost-sharing subsidies, could make insurers hesitant to continue to participate, even if the market is showing signs of improving otherwise. 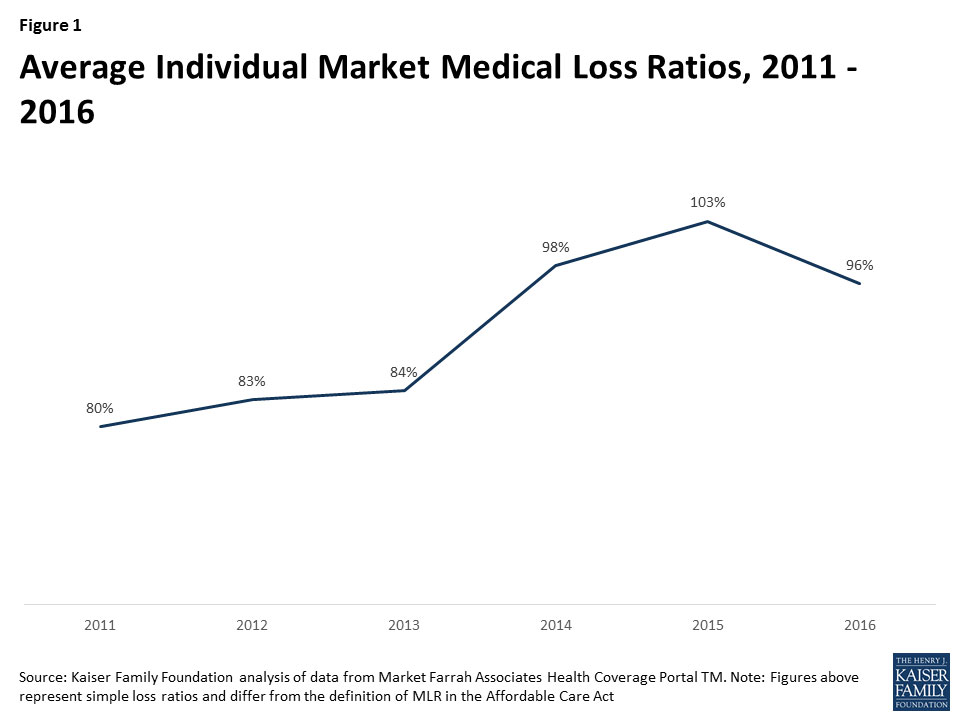 I've avoided using the term "over the hump" because it still seems premature, because there are some parts of the country where it clearly isn't the case (Tennessee, Arizona, Oklahoma and Iowa in particular). Also, even if rates have stabilized, that doesn't improve the situation for the unsubsidized half of the individual market (around 9 million people); it just means that things shouldn't get worse for them. Finally, the Kaiser study includes a bunch of additional caveats and disclaimers.

Even so, the message being hammered home by S&P, the CBO, the KFF and the carriers themselves seems to be pretty clear by now: