Even if every carrier did provide a full breakout...well, there's something like 300 of them nationally; it would take gobs of time for me to pour over 300+ financial reports and pulling together every enrollment data point for each carrier in each state. Believe me, I've tried.

As a result of this, I've had to cobble together extremely rough estimates from a variety of sources based on a mish-mash of hard data, estimates and extrapolation. In general, I operated on the assumption that the total individual market was roughly 50/50 on exchange/off-exchange in 2014, but had shifted to roughly a 60/40 split as of 2016. I was vindicated on this estimate about a year ago, when Steve Davis and Robert Laszewski took a crack at it. At the time, my estimate was that the national breakout was something very close to:

...for a grand total of around 20.2 million, of which around 18.2 million were part of the ACA-compliant risk pool. It's important to note that the 760,000 BHP enrollees in Minnesota & New York are not included in any of these totals.

As I noted a few days ago, according to analytical firm Mark Farrah Associates, the total individual market appears to have shrunk from that 20.2 million all-time high just over a year ago down to around 18.8 million as of last September. We know that the on-exchange portion of this dropped by nearly half a million people (probably more like 400K when you take non-payments and attrition into account), so assuming the off-exchange market stayed exactly the same, that should bring the total indy market down to around 18.4 million as of April 2017.

Except, of course, that the off-exchange market hasn't stayed static either. Some of those enrolled in grandfathered and/or transitional plans have either died, turned 65 (and thus moved onto Medicare), fallen on hard times (and thus moved onto Medicaid) and so on. Others, of course, were scared off by the 25% average unsubsidized individual market premium hikes we saw this year, and either got a job with benefits, transitioned to a "healthcare ministry" plan or dropped coverage entirely (perhaps relying on a short-term or "mini-med" plan) and paid the individual mandate penalty instead.

Well, earlier today Paul Houchens of Milliman (one of the largest/most respected actuarial firms in the world) gave me a heads up regarding a state-by-state, comprehensive ACA subsidy study which they've published. This report mainly focuses on the financial side of the ACA for obvious reasons (how many have been/are currently receiving APTC and/or CSR assistance, etc), but it also provides some excellent hard enrollment numbers for 2015, 2016 and 2017. 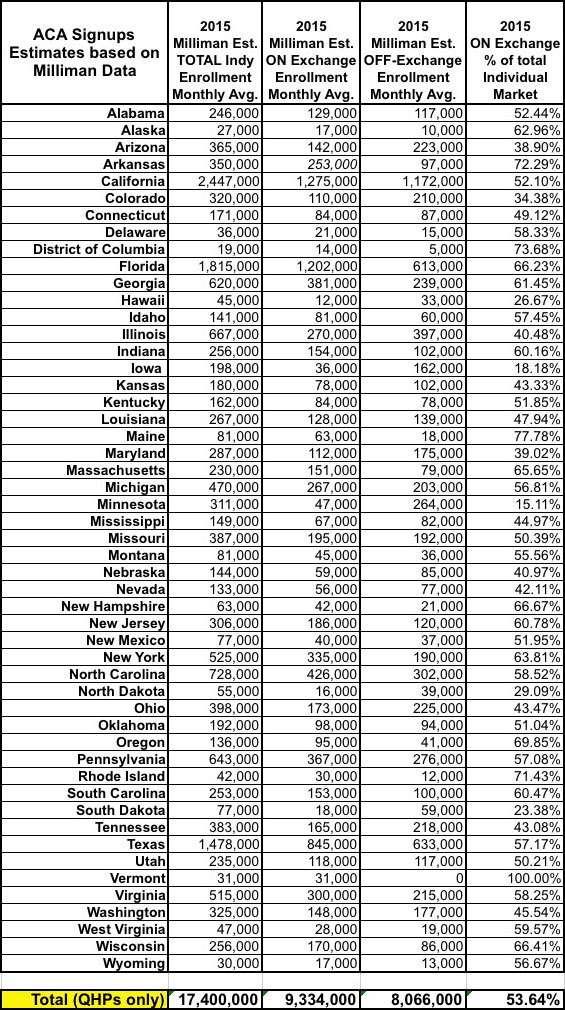 Now, there are a couple of important caveats, as always:

For instance, for 2015, 11,688,074 people selected QHPs via the ACA exchanges as of the end of open enrollment, but Milliman estimates that the monthly average enrollment was only around 9.33 million, or 79.9% of that.

In all three cases, the First Quarter numbers (that is, as of the end of March of each year) are likely somewhat higher; the effectuated enrollment numbers in both 2015 and 2016 as of 3/31 was around 87% of the QHP selection total. It's safe to assume this is about where things stood as of 3/31/17 as well. Therefore, to get an accurate Q1 2017 snapshot, I have to bump Milliman's 2017 estimates up by about 8.8%, to roughly 10.6 million on-exchange enrollees.

@charles_gaba i would estimate total 2016 enrollment will be around the 17.5 million reported for 2015

He also gave a rough estimate of perhaps 90% of the total individual market now being ACA-compliant, leaving around 10% of it still enrolled in grandfathered and/or transitional policies:

@charles_gaba The 2015 MLR data had 76% of individual market membership as risk corridor eligible,with churn we are probably approaching 90% ACA-compliant

Nationally, Milliman estimates that the on-exchange market made up roughly 54% of the total in 2015 and about 59% of it in 2016. Much of that ratio increase was due to several states (Colorado, Illinois and Oregon) dropping "transitional" plans at the end of 2015; no additional states dropped these at the end of 2016 (although all of them were supposed to drop them at the end of 2017...except that this deadline has been extended again, this time by Tom Price's HHS Dept.)

For the Spring 2017 Snapshot, then, I'm assuming that:

Using these assumptions, here's what I've come up with as my best estimates of the current breakout across every state: 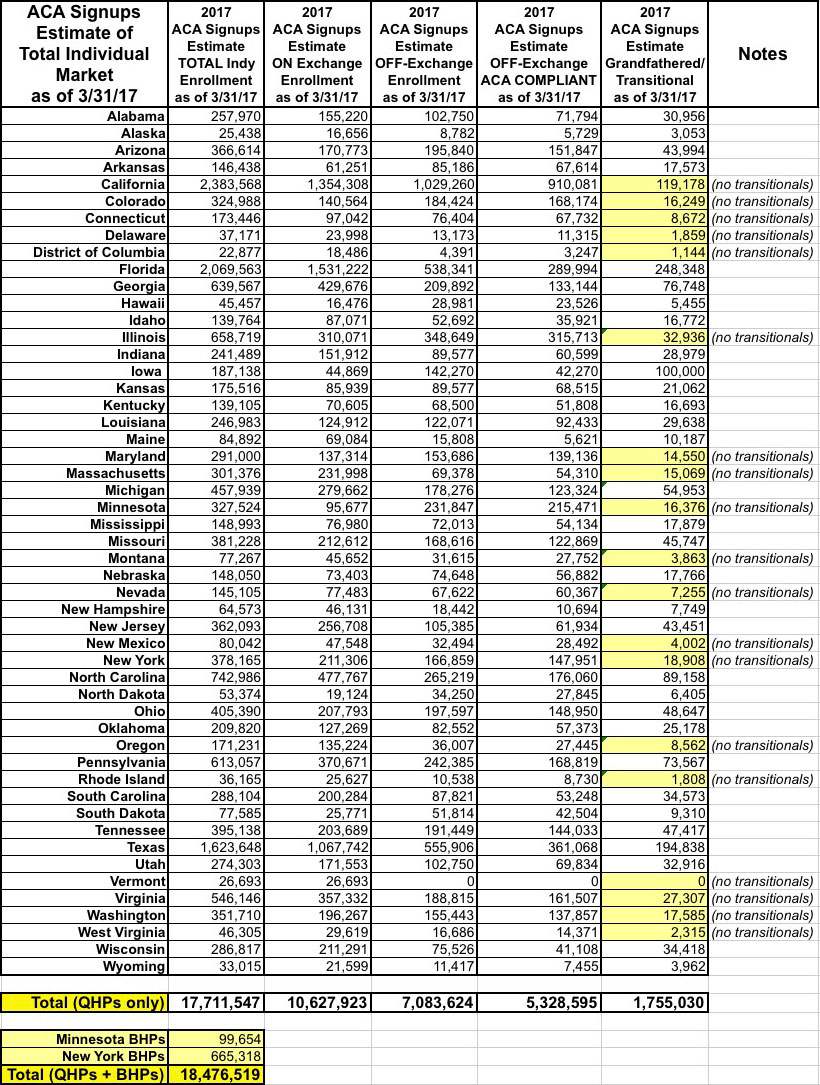 As you can see, not only is the grand total about 2.5 million smaller than I had it pegged a little over a year ago (1.7 million when you include BHPs), the breakout is different as well:

(I should note that there's really not much point in distinguishing between "grandfathered" and "transitional" anymore; the latter category have now been bumped out by 5 full years, and I'm pretty sure both parties will continue to kick that can down the road indefinitely, so they might as well be "grandfathered" at this point).

Again, I could be off a bit on any number of these, but this should be fairly close to the situation. If so, this means that the monthly average annual individiaul market progress has been something like:

...with roughly 400K being "lost" to BHPs/Medicaid/etc on the exchange and another 400K or so being lost off-exchange due to people dropping out of the official individual market altogether.

That's around a 4.6% drop, perhaps 40% of which is due to either BHP or Medicaid cannibalism. Call it perhaps 2.8% dropping for reasons related to rate hikes/narrow networks and/or other legitimate problems with ACA-compliant policies.

Does that count as a "death spiral"? It doesn't sound like it to me, but I honestly don't know.

Oh, if you really want to see the full spreadsheet with the 2015, 2016 and 2017 monthly average estimates as well, here you go...it's a bit of a beast, though (click the image for the full-size version):