Obviously there's no way of being 100% certain about this because the GOP still hasn't actually presented their ACA replacement bill (and in fact, have been playing a rousing game of Where's Waldo with it all afternoon), but we do have a pretty good idea of what it's gonna look like, thanks to a recent draft version of the bill which was leaked a couple of weeks back.

The Kaiser Family Foundation has crunched the numbers and compared what things look like financial assistance-wise under the ACA, the HHS Secretary Tom Price's "Empowering Patients First" bill and the recent "House Discussion Draft" bill to see how the GOP versions size up...and it's not pretty.

First, the look at how the ACA's Advance Premium Tax Credits are calculated. I've always had a general understanding of how they work (available to those between 100-400% of the Federal Poverty Line on a sliding scale, so that those at the lower end of that range receive significantly higher credits than those at the top end). I also knew that the actual dollar amount was tied, somehow, to the price of the "2nd lowest benchmark Silver plan" available in that area...which changes from year to year as various carriers change their exchange offerings and jockey for position. Aside from that, however, I didn't know the exact formula...until today:

More specifically, the ACA tax credit for an eligible individual is the difference between a specified percentage of his or her income (Table 1) and the premium of the second-lowest-cost silver plan (referred to as the benchmark premium) available in the area in which they live. There is no tax credit available if the benchmark premium is less than the specified percentage of premium (which can occur for younger purchasers with relatively higher incomes) or if family income falls outside of the 100% to 400% of poverty range. For families, the premiums for family members are added together (including up to 3 children) and compared to specified income percentages. ACA tax credits are made available in advance, based on income information provided to the marketplace, and reconciled based on actual income when a person files income taxes the following.

Because of the "...benchmark is less than the percentage" caveat, just being within 100-400% FPL doesn't guarantee that you'll receive a tax credit, and there are other exceptions, but the 100-400 range is a fairly good rule of thumb.

Here's the table which actually breaks out the exact numbers involved:

As I've noted several times here and elsewhere, my solution to the problem would be to simply rework the numbers above--raise the high end cap to, say, 500% FPL and lower the premium cap for the other brackets to something along these lines (which would also help resolve the Medicaid Gap issue, although as long as I'm fantasizing here, In this scenario all 50 states would expand it anyway):

...or something along those lines. While I'm at it, I'd also expand/revamp the Cost Sharing Revenue structure as well; right now CSR only applies to those below 250% FPL, and is only strong for those below 200%. Furthermore, from a sheer public awareness POV, that cut-off confuses the hell out of people. I'd also have CSR apply to everyone below 500% FPL, tapering off as you move up the income ladder.

Anyway, that's just me. Let's look at how the GOP plan (or at least our best guess at whatever it is) would work:

The Kaiser analysis includes a table which compares all three structures (the ACA, the House Draft and Price's bill) to show how people fare under each at certain ages, income levels and geographic locations. I've simplified this below to only look at the U.S. average and to remove the Price version, since it looks far more likely that the House Draft version is closer to what they'll go with: 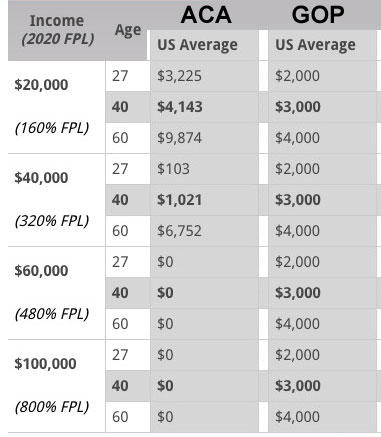 As you can see, higher-income people ($60,000 and up), who currently don't receive any financial assistance whatsoever, would suddenly find themselves with an extra $2,000 - $4,000...while lower-income people, who are currently receiving varying levels of assistance, would see that assistance shrink (the most extreme case above is a 60-year old earning $20,000, who would see their tax credits slashed by 60%, from over $9,800 down to $4,000/year). Here's what it looks like visually: 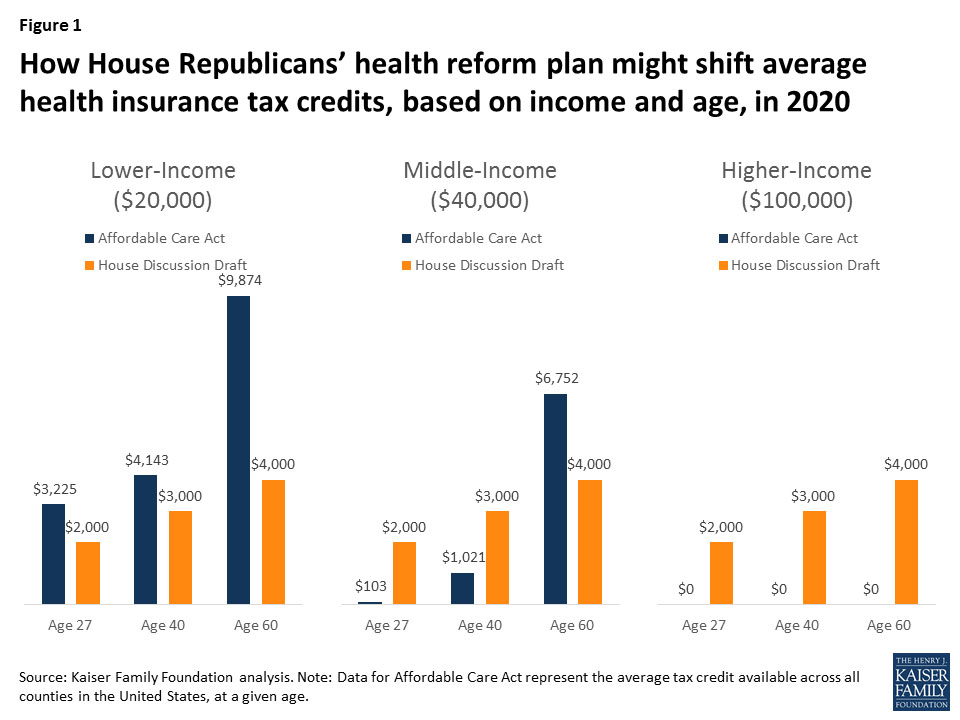 In other words, remember this (admittedly crude) table I whipped up a while back? 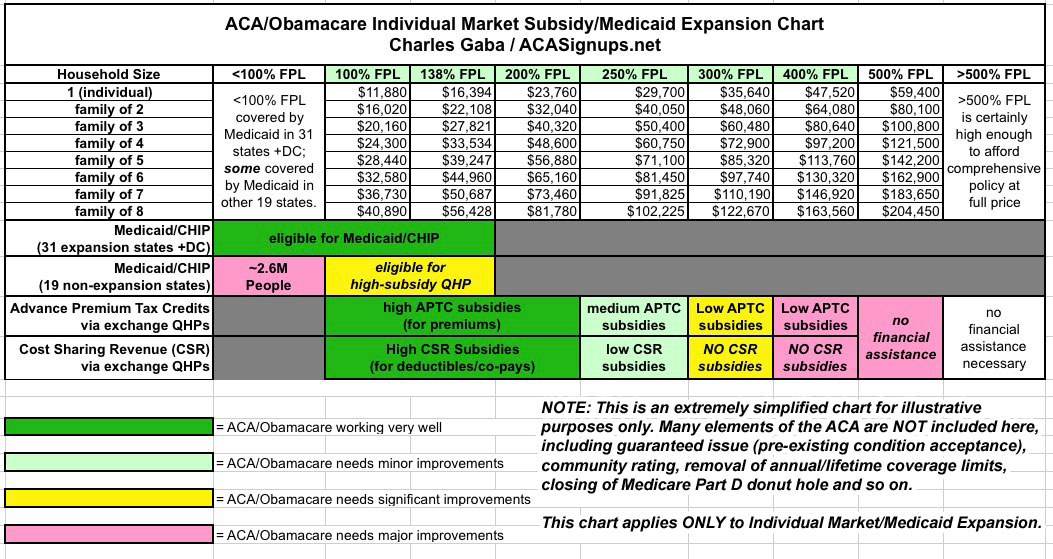 Well, under the House Draft scenario, it would instead look something like this (again, this is a very crude, simplistic representation):

Notice that it basically reverses the color pattern: Instead of helping the lowest-income the most, it helps them the least relative to their situation and needs. If you're poor and older, you get double-screwed.

IMPORTANT UPDATE 3/3/17: According to Paul Demko of Politico, the latest version of the House Draft Bill (presumably this is the one which they were trying to hide all day yesterday) includes a couple of changes:

However, one significant change to the tax credit is being considered: not allowing wealthier Americans to qualify for assistance. No specific proposal for cutting off eligibility has been added to the legislation, but staff have been directed to come up with possible proposals, according to a source familiar with the deliberations.

In other words, at least some of the green sections above would presumably change to light green...except there's no specific cut-off income included yet. This change would also mean that you'd still have to provide proof/verification of your income...which wipes out any claims of "streamlining/simplifying" the enrollment process. That is, you'd still presumably have to fill out the exchange website application.

Let's assume, for sake of argument, that the "means testing" change would mean that those making over, say, $200,000 don't receive a tax credit. Only around 2-3% of all Americans earn that much, and presumably a large chunk of those are covered via their employer or are over 65 and on Medicare anyway, so this isn't going to save much money for the federal government. What we're really talking about here is neutralizing ads attacking the GOP for giving Bill Gates $4,000 he doesn't need while only giving some minimum-wage shlub $2,000 that he does.

Granted, Bill Gates himself presuambly wouldn't actually receive the GOP tax credits, since I assume he's still insured through Microsoft...but he did retire as CEO quite some time ago, so I'm not sure what his legal "employment" status is, so perhaps he would. Either way, "Non-elderly self-employed billionaires!!" doesn't have quite the same rhetorical sting to it as naming a specific person.

Of course, killing off the unneeded $4,000 tax credit for Bill Gates and other billionaires doesn't change the fact that they'd still receive an average $7 MILLION TAX CUT under the GOP plan, which is the real point of all of this:

The top 400 highest-income taxpayers -- with average annual incomes of more than $300 million each -- would receive an estimated average annual tax cut of $7 million as part of the repeal, according to the study of Internal Revenue Service data.That would result in a $2.8 billion a year loss in tax revenue to the Treasury.

Roughly 160 million households with incomes below $200,000 would get nothing from the repeal of these two taxes, according to the report.

Getting back to Demko's Politico piece...

The latest draft, dated Feb. 24, also still includes a plan to phase out Obamacare’s Medicaid expansion. Instead the program’s current open-ended federal entitlement would be replaced by capped payments to states based on the number of Medicaid enrollees.

I believe this means that Block Grants are still included. Oh, and 14 million people would still be kicked off of Medicaid.

The proposal also still includes plans to eliminate Obamacare’s taxes. Revenue would be generated by capping the tax exemption for employer-sponsored plans at the 90th percentile of current premiums. That means benefits above that level would be taxed.

Perhaps the biggest change in the latest draft is removing a section that would have allowed “grandmothered” plans to remain in the market indefinitely. Those are plans that were in existence when Obamacare was fully implemented in 2013, but that didn’t meet the coverage requirements of the law.

This would be a major change...if the GOP's plan still required healthcare policies to maintain the same minimum level of Essential Health Benefits that ACA-compliant policies do. Since to my knowledge the GOP plan strips away those requirements anyway, however, I'm not sure that this means much in practice.

The latest version of the bill creates a default “reinsurance” fund for states that fail to take advantage of the grants, which is similar to a program in the Affordable Care Act. Under the new proposal, insurers would be reimbursed for expensive customers with medical claims that exceed $50,000, with a cutoff point of $350,000.

I'm not an expert on reinsurance, but this sounds like pretty weak tea to me. To my knowledge, the real risk pool problems are enrollees who rack up claims into the million-dollar range, so I'm not sure how much this would help.

In short, these latest changes would still do absolutely nothing to make the GOP's bill any better for lower-income people, while it would still be a huge windfall for the wealthy. It would slightly improve the situation for the insurance carriers (though I suspect they'd still prefer to simply have the $10 billion or so in Risk Corridor reimbursement that they're already legally owed under the ACA which was denied them by Marco Rubio & Co. a couple years back, along with a guarantee of the CSR reimbursements which, again, they're legally owed on an ongoing basis).

It's still a big piece of crap, with a few sugar sprinkles on top.