Other than this, though, there's a pretty obvious "Occam's Razor" explanation as well: Higher premiums and carriers dropping out of the exchange.

Significant premium increases shouldn't have had much impact on those who qualify for tax credits (about 85% of exchange enrollees), but they obviously are gonna be a big turnoff to winning over enrollees who don't qualify for credits (or who only qualify for nominal assistance). By the same token, any time a carrier drops out of the market, some percentage of their enrollees are gonna decide to make other arrangements rather than switch to a different carrier.

I don't really have the data to determine the impact of the latter, but I have hard evidence of the former...namely, my own State By State 2017 Rate Hike Project from last fall. As you may recall, I (fairly accurately) projected the weighted unsubsidized average rate hikes for the entire ACA-compliant individual market in each state. Nationally, I came up with an overall average of around 25%, but this varied widely from state to state...from as low as 1.3% in North Dakota and Rhode Island to as high as a whopping 76% in Oklahoma.

So, what I've done is to break out the year-over-year exchange enrollment change into three groups:

...and the results tell the story:

Remember, the original projections by both the HHS Dept. and myself called for around 13.8 million. The actual total is around 12.2 million (possibly 12.3 million in the end). My gut tells me that the "TrumpScare" sabotage efforts killed off perhaps 500K enrollments, but that enrollments would've been another 500K - 1.0M higher if not for the excessive rate increases on the unsubsidized enrollment pool and a number of carriers dropping out of the exchanges (in fact, Rhode Island specifically blamed UnitedHealthcare's withdrawl as being one of the major factors). 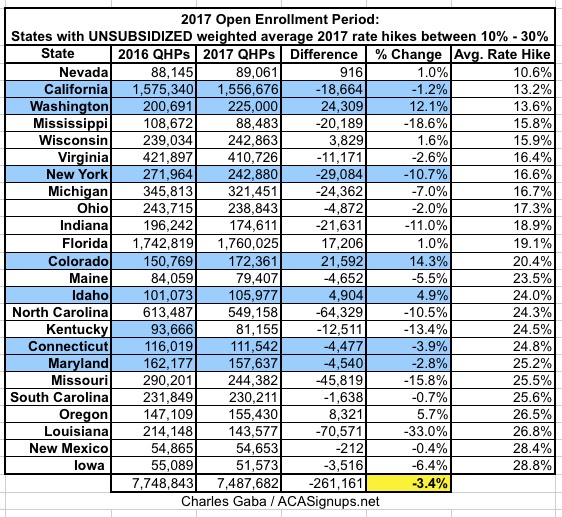 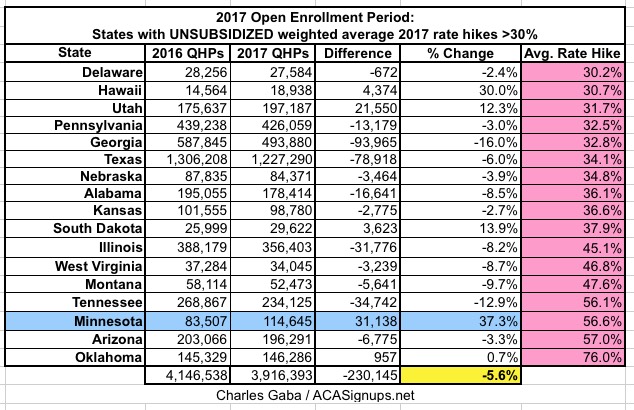