UPDATE: Did Trump actually robocall people urging them not to enroll last week?

As I noted last Friday, there's pretty good evidence that the Trump administration killing off most of the final HealthCare.Gov open enrollment deadline TV ads was directly responsible for a significant portion of the OE4 enrollment reduction on the federal exchange. The most obvious evidence of this is that in the final, critical 5 days of the period (when there's always been a significant spike in last-minute enrollees), the state-based exchanges (which run their own marketing campaigns) saw a 1.5% enrollment increase (at least 44,000 people) at the same time that HC.gov enrollment fell by 5% (450,000 people) short. This discrepancy between the state exchanges and the federal one will become a bit larger once the final enrollment numbers from CT, DC, ID, MA, MN, RI & VT come in. 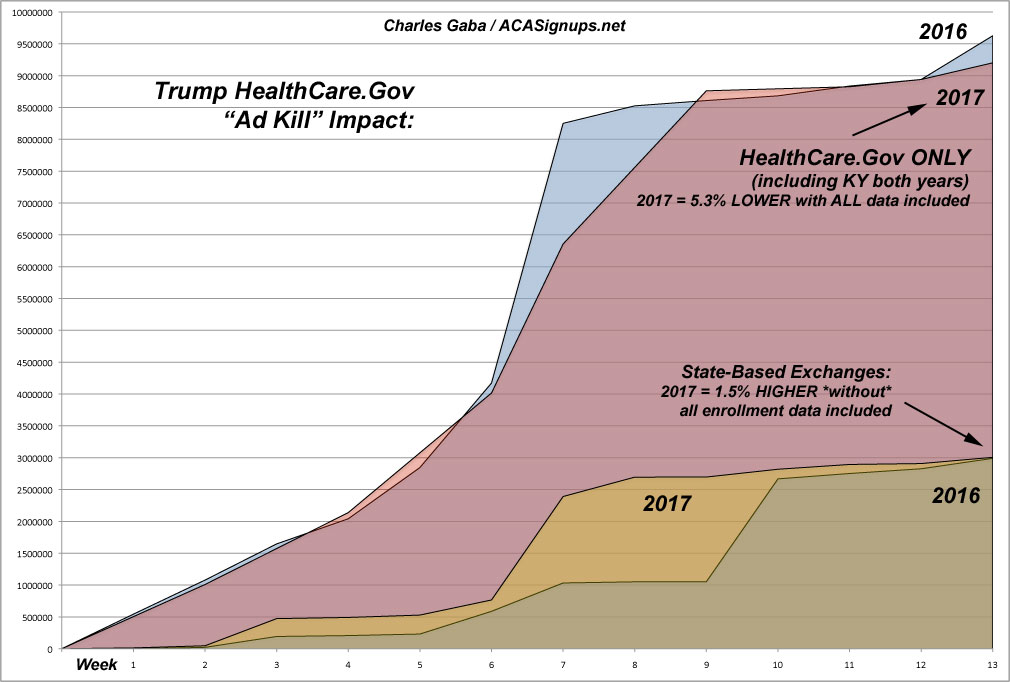 However, it looks like there may have been even more shenanigans going on than I thought. This comment, posted in a popular pro-ACA Facebook group, was brought to my attention over the weekend:

"I received at least three robocalls (that I answered) in January from a recording of Trump screaming at me about "the complete failure of Obamacare" and urging me to add my name to those who support an effort to repeal it. That, added to the lack of reminders on the Jan. 31 deadline had to have an impact."

I got in touch with the woman who posted this, Susan R. of South Carolina, who gave me some additional information:

I checked my caller ID to be sure and the calls came from:

As for the recording, it began, "This is Donald Trump. Obamacare has been a disaster..." (there could have been a modifier like "total", "complete" or "absolute", but maybe I'm just thinking that because I've heard him say that before). The script went on to reference skyrocketing premiums and the need for Obamacare to be repealed and replaced immediately. He then said to "dial 1 to add your name to a list" that would be faxed to Washington to show my support of the repeal/replace effort. I didn't dial 1, I just hung up.

PS - I am self-employed (10 years now) and purchase my insurance through the state exchange (no subsidy). Yes, the premiums have gone up. But they are still NOTHING close to what I paid before the ACA with a much less robust plan and a higher deductible. Plus, 18 months ago I was diagnosed with Type 2 diabetes. I have worked hard to get my diabetes under control with the goal of getting off the five medications I take every day. But I know that I will be among the first to get kicked off my insurance as soon as the ACA protections are removed. And god only knows what I'll end up paying if I can actually get insurance. So this is VERY personal to me.

I ran a quick search on the last number and found the following: 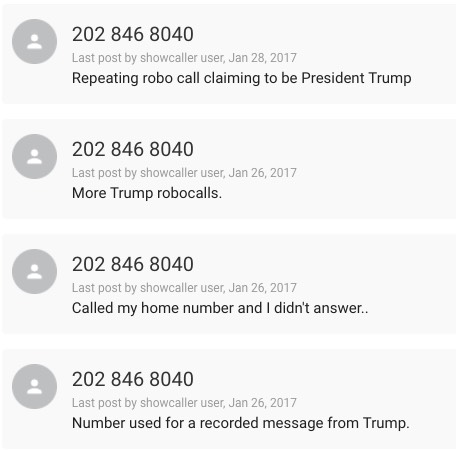 UPDATE: As suggested in the comments, I should make it more clear that I have no proof that these calls are actually connected to or approved by Trump or his administration; it could be some third-party outlet or some scammers who recorded his rantings from the campaign trail or whatever. If that's the case...well, never mind, although the rest of this post still holds true.

I've confirmed just over 12.2 million QHP selections so far, with 9 states left to go. My guess is that once the dust settles, the final tally will be around 12.4 million...roughly 1.4 million fewer than both the HHS Dept. and I were originally projecting prior to the November election.

Here are the main potential sources for the enrollment drop this year:

As several regulars here have pointed out, some of the difference could simply be Occam's Razor...higher rates + fewer choices = fewer signing up.

My guess is that the Trump/sabotage factor accounts for perhaps 1/3 of this, with other factors making up the 2/3...suggesting that even if Hillary Clinton had ended up taking office as President, the final number would probably still have ended up flat or only slightly ahead of last year (perhaps 13 million even?)

Even so, that's still several hundred thousand people who didn't get covered who otherwise would have due specifically to deliberate efforts on the part of the GOP. This is hardly surprising, since they've been doing everything in their power to thwart people from signing up all along, such as this charmer from Georgia...

...or this story out of Missouri:

Anyway, the ball is now entirely in their court, for good or for bad. They broke it, they own it going forward.