UPDATED: CBO confirms everything I (and Urban Institute, and many others) have been saying.

For weeks now, I (and many others) have been crunching the numbers and making projections to see just what the fallout would be on the individual market (and the total uninsured rate) if the GOP were to follow through with their promise to repeal the Affordable Care Act.

There's a lot of variables at play, and there's also no way of knowing what (if any) replacement plan they'd come up with instead, but there are two main scenarios to consider: First, what would things look like if the ACA were to be fully repealed (without a half-decent replacement ready to swoop in); second, what would happen if the ACA were to be partially repealed via the reconciliation process (ie, killing off the subsidies, individual/employer mandates, Medicaid expansion and so forth, but keeping the guaranteed issue, community rating and other regulatory provisions in place, which is what would happen if the Republicans were to continue on their present course).

I've gotten a lot of attention for my own state-level (and, more recently, county-level) estimates of the former scenario, while the Urban Institute has been cited by just about everyone for their analysis of the latter one. As far as I can tell, a full repeal with immediate effect would result in around 25 million people losing coverage, while the Urban Institute says that nearly 30 million would lose coverage under a partial repeal (their number is larger mainly because they foresee the off-exchange individual market being decimated as well).

Well, today the nonpartisan Congressional Budget Office has chimed in (PDF), and their conclusions are pretty much everything that all of us have been saying...but even worse:

CBO and JCT offered a partial assessment of how H.R. 3762 would affect health insurance coverage, but they had not estimated the changes in coverage or premiums that would result from leaving the market reforms in place while repealing the mandate penalties and subsidies.

In other words, this report is using the Urban Institute scenario: Partial repeal.

In brief, CBO and JCT estimate that enacting that legislation would affect insurance coverage and premiums primarily in these ways:

Now, the first bullet point is about the same (slightly worse, actually) as the Urban Institute's conclusion: Around 32 million additional people uninsured (remember, this is on top of the 28 million who are currently uninsured, for a total of around 59 million uninsured by 2026).

(I should note that a little later on, they also do, briefly touch on my scenario (full repeal without replacement), and are similarly close to my own estimates):

(The number of people without health insurance would be smaller if, in addition to the changes in H.R. 3762, the insurance market reforms mentioned above were also repealed. In that case, the increase in the number of uninsured people would be about 21 million in the year following the elimination of the Medicaid expansion and marketplace subsidies; that figure would rise to about 23 million in 2026.)

Again, this is a bit lower than my own ~25 million estimate, but still in the ballpark.

However, check out the second bullet point on the first page:

Whenever I try explaining why a parital repeal would be even worse in some ways than a full repeal, I note that stripping the subsidies/mandate while keeping guaranteed issue/community rating would cause rates to "skyrocket" by "much more" than the ugly unsubsidized rate hikes we've already seen the past year or two. However, saying that they'd go up "a lot" is pretty vague.

Today's CBO analysis finally gives a fairly concrete number to work with, which shows just how devastating the GOP's game plan really is: They're projecting that individual market premiums would be twice as much by 2026 under a partial repeal scenario as they would be with the ACA in place.

I cannot stress the highlighted part above enough, though: Unless I'm misunderstanding the CBO's wording here, when they say premiums would be "double", that's relative to what they're already expected to be WITH the ACA in place as is.

What does that mean in actual dollars?

Well, I whipped up two scenarios. The first one assumes that under current law (i.e., the full ACA in place as is), unsubsidized indy market premiums go up 5% per year for the next 9 years. The second one assumes that they go up 10% on average per year. 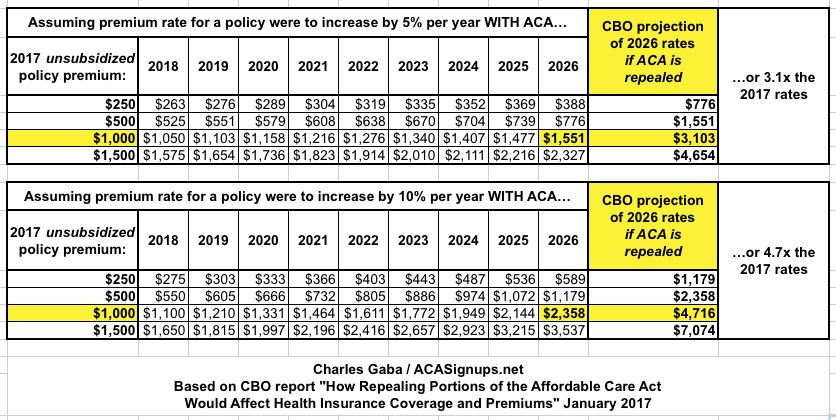 UPDATE: It's conceivable that the CBO really did mean premiums would "only" double by 2026, as in a 100% rate increase over 9 years. However, that would be the equivalent of roughly an 8% average annual rate hike which isn't pleasant but is below the average increases over the past 10 years, both pre-ACA and since then. If someone can show that I'm misinterpreting the report, I'll be sure to retract this point...but their wording seems pretty clear to me.

UPDATE x2: OK, never mind; looks like I had it correct in the first place:

Of course, this is exactly why the CBO (and Urban) expect the entire individual market to collapse if the ACA is repealed: Just about no one would be able to afford those premiums, so everyone would bail:

So, what else do they have to say? Plenty.

Remember last fall when the residents of Pinal County, Arizona were in a panic because there was the possibility of not having any carriers offering individual market plans this year? That crisis was eventually resolved, but it did highlight the Achilles' heel of free-market-based systems: Nothing requires private companies to participate in it. Well, guess what?

Effects on Participation by Insurers.

In CBO and JCT’s estimation, the factors exerting upward pressure on premiums and downward pressure on enrollment in the nongroup market would lead to substantially reduced participation by insurers and enrollees in many areas. Prior experience in states that implemented similar nongroup market reforms without a mandate penalty or subsidies has demonstrated the potential for market destabilization. Several states that enacted such market reforms later repealed or substantially modified those reforms in response to increased premiums and insurers’ departure from the market. After weighing the evidence from prior state-level reforms and input from experts and market participants, CBO and JCT estimate that about half of the nation’s population lives in areas that would have no insurer participating in the nongroup market in the first year after the repeal of the marketplace subsidies took effect, and that share would continue to increase, extending to about three-quarters of the population by 2026. That contraction of the market would most directly affect people without access to employment-based coverage or public health insurance.

Yes, that's right: The CBO projects that, as I (and others) have warned, most carriers would flee the entire individual market (not just the exchanges) if this plays out the way the GOP is currently headed.

It's also important to note that for all of the GOP's "delayed effect" talk, the CBO assumes that their partial repeal wouldn't actually go into effect for a couple of years in their analysis:

H.R. 3762 would make two primary sets of changes that would affect insurance coverage and premiums. First, upon enactment, the bill would eliminate penalties associated with the requirements that most people obtain health insurance (also known as the individual mandate) and that large employers offer their employees health insurance that meets specified standards (also known as the employer mandate). Second, beginning roughly two years after enactment, the bill would also eliminate the ACA’s expansion of Medicaid eligibility and the subsidies available to people who purchase health insurance through a marketplace established by the ACA. H.R. 3762 also contains other provisions that would have smaller effects on coverage and premiums.

In other words, the "repeal and delay" game plan is just as devastating to the individual market.

Basically, the GOP has painted themselves into a corner. Even if you think the ACA is the worst thing in the world, there's absolutely no non-political reason to pass a law repealing any of it at the moment enen if that repeal isn't triggered until 2 years later. And if it can wait a couple of years, why not wait until then to pass the repeal in the first place?

Oh, right...they've spent 7 years promising to repeal it, so now they "have" to, because...reasons.