New Jersey: Here's the ~739,000 residents who could lose coverage, by county

Assuming 310,000 people enroll in private exchange policies by the end of January, I estimate around 207,000 of them would be forced off of their private policy upon an immediate-effect full ACA repeal, plus another 532,000 enrolled in the ACA Medicaid expansion program, for a total of 739,000 New Jersey residents kicked to the curb.

Thanks to Louise Norris for providing this report which breaks out the Medicaid expansion numbers by county. It's worth noting that like New York, New Jersey will also see more people lose Medicaid coverage post-ACA repeal than technically signed up "because" of the law because they, too, had previously partly expanded Medicaid via a pre-ACA waiver which has since expired. Unlike New York, however, in New Jersey's case I had already baked the larger number into my estimates anyway, so it hasn't changed anything. 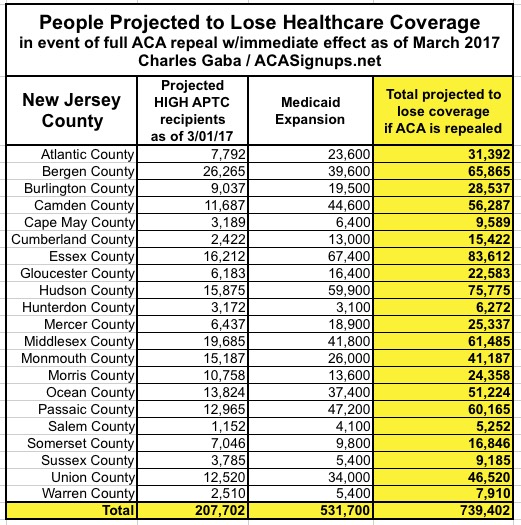