Governor Andrew M. Cuomo today announced the impact of potential repeal of the Patient Protection and Affordable Care Act on health care coverage of New Yorkers and the state budget. If the repeal of the Affordable Care Act were enacted, an estimated 2.7 million New Yorkers would lose coverage and New York State would experience a direct state budget impact of $3.7 billion and a loss of nearly $600 million of federal funding that goes directly to counties, which they use to help lower property taxes.

"The cost of a repeal of the Affordable Care Act, to state and local budgets and to the New Yorkers who depend on its health care coverage, is simply too high to justify," Governor Cuomo said. "Since its implementation, the Affordable Care Act has become a powerful tool to lower the cost of health insurance for local governments and New Yorkers, and it is essential that the federal government does not jeopardize the health and livelihoods of millions of working families."

The NY State of Health exchange has successfully cut the percentage of uninsured New Yorkers in half, from 10 percent to 5 percent. It has also significantly expanded eligibility and access to health coverage, allowing hundreds of thousands of previously uninsured New Yorkers to achieve economic and healthcare security. Based on current enrollment levels, the repeal of the Affordable Care Act would result in over 2.7 million New Yorkers losing health coverage. The estimated number of individuals at risk of losing coverage, based on current enrollment levels, is broken down by counties below:

It goes on to display a county-level breakout of the 2.7 million people. They don't separate out the numbers between QHPs, BHPs and Medicaid, but it's pretty obvious where the discrepancy lies.

If you look at my own table, you'll see the 7th column, labelled "Medicaid/CHIP enrollment as of February 2016", with a state-wide total of just under 2.2 million people. This is the total number of New Yorkers who enrolled in Medicaid/CHIP through the NY State of Health ACA exchange.

However, it was my understanding that of those 2.2 million, only around 286,000 of them are eligible for Medicaid/CHIP specifically due to the ACA's eligibility expansion provision (ie, the 138% FPL income threshold). I was under the impression that the remaining ~1.9 million enrollees were people who were already eligibile under pre-ACA rules, but who simply chose to enroll via the state exchange website instead of the old-fashioned way (ie, filling out paperwork at their local health dept. offices, etc).

It appears that I may have been sorely mistaken about this.

I'll ask around and see if I can straighten this out. Assuming Gov. Cuomo's office is correct, I massively underestimated the negative impact of a full ACA repeal on New York.

The greatest impact for New York would be in the Medicaid program, where as many as 1.9 million people could lose their health insurance.

The state split the cost of Medicaid with the federal government and was able to expand its program thanks to federal waivers granted by the Centers for Medicare and Medicaid Services.

In other words, before the ACA, in a completely unrelated move, New York had already expanded their Medicaid coverage partially using a separate waiver with CMS. This actually added the bulk of New York's additional Medicaid enrollees....before the ACA was even signed into law.

Then, the ACA expanded Medicaid a bit further in NY, allowing a few hundred thousand more people to be enrolled. The ACA expansion basically superceded the waiver expansion, though the difference was far less dramatic than other expansion states because most of that expansion had already taken place under the pre-ACA waivers anyway.

Sometime between then and today, the original expansion waivers expired...which wouldn't be a problem if the ACA is still in place, since it trumped (pun intended) the waiver's expansion anway.

If the ACA is repealed,  however, all of the Medicaid expansion from both the ACA and the expired waivers disappears...leaving not 286,000 people kicked to the curb (as I previously thought), but around 1.9 million state-wide.

I've overhauled the spreadsheet/table below to show the corrected, updated numbers. Note that my estimates still come in a bit lower than Gov. Cuomo's (around 2.5 million instead of 2.7 million total), because the press release assumes that all subsidized exchange enrollees would lose coverage, whereas I'm operating on the assumption that a portion of these folks at the upper end (who are only receiving nominal subsidies) would be able to stick it out. I'm also not sure where the 500,000 BHP enrollee figure comes from--according to the last official NY State of Health report, BHP enrollment stood at around 380,000 people. It's possible that this has continued to climb since then, however.

FINAL (I hope) UPDATE 1/05/16: OK, there's a lot of confusion about exactly what the Basic Health Plan (BHP) enrollment currently is in New York.

All of these numbers seem reasonable...because the 380K figure is from 11 months ago; 565K is from November and 586K is presumably as of today.

In light of this, I'm making one more update to the spreadsheet. I don't know the exact county-level BHP breakout, but I can get a fair approximation by extrapolating from the 380K numbers for each county from last January (basically, I just added 54% to each number).

As it happens, the additional 206,000 BHP enrollees brings the grand total at risk of losing coverage right back up to...2.7 million after all, just as Gov. Cuomo's office estimated, although the exact breakout between counties and type of coverage differs a bit.

FINAL, FINAL UPDATE 1/06/16: Well that just figures...right after I posted the last update, the New York State of Health exchange posted their first official Open Enrollment report for 2017...and while the QHP numbers are slightly lower than I expceted, the Medicaid and Basic Health Plan numbers are dramatically higher still.

When you add in the latest figures, the grand total comes in at nearly 3.1 million New Yorkers who are at risk of losing coverage. 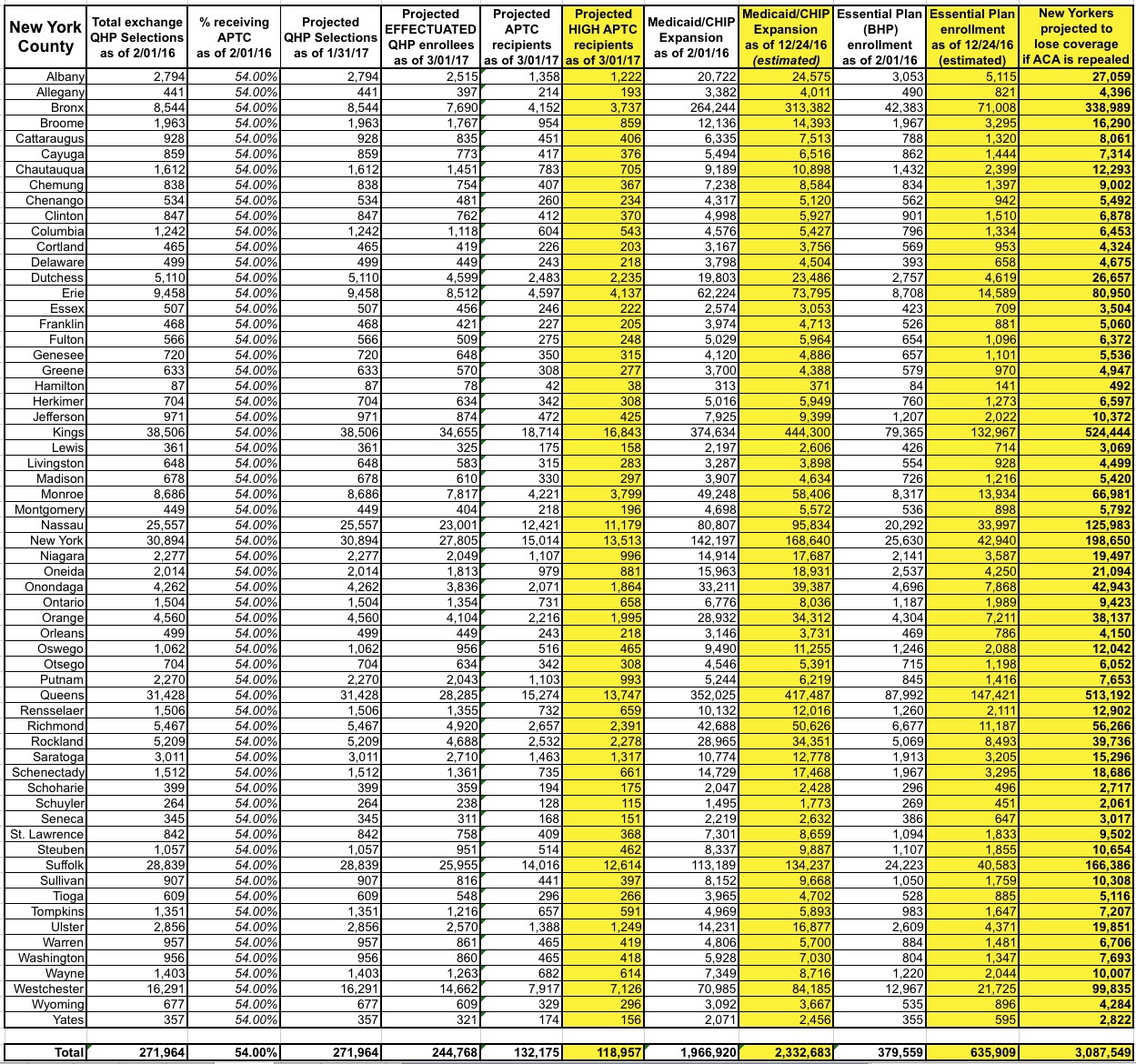