OK. Today saw fresh enrollment updates from Rhode Island (nominal), Covered California (impressive) and, most significantly, HealthCare.Gov (which not only covers 39 states, but also finally includes auto-renewals). I now have auto-renewal for 48 states + DC included in the mix, and the numbers are current through 12/31/16 or later for 41 of them. I still have no data whatsoever from Vermont (ironic, given their history of progressive healthcare policy, Bernie Sanders, etc), and only very limited data out of New York (they mentioned 55,000 enrollments over a 3-day period just ahead of the December deadline, but nothing from before or after that).

Still, NY and VT aside, this is about as comprehensive as I can expect. As of New Year's Eve, I've confirmed 11,413,570 QHP selections via the ACA exchanges, broken out by state below. Assuming another 22K or so in Vermont and an additional 168K via New York, plus a few thousand more collectively from the missing dates in MA, CT, DC, ID, CO, MD, WA and MN and the grand total should be just over 11.6 million nationally.

It's pretty clear to me now that, barring a last-minute panic-surge over the final 11 days of the Open Enrollment Period due to the shock of realizing that yes, Donald J. Trump really did become President of the United States starting January 20th, 2017, there's very little chance of achieving the pre-election projection of 13.8 million exchange-based QHP selections made by both the HHS Dept. and myself.

Now, to be fair, both HHS and myself used a range in our original projections: HHS figured it would come in somewhere between 12.8 - 14.9 million; mine was a tighter range: 13.5 - 14.0 million. 13.8 million is simply the mid-point of each. Therefore, the odds are still very high that the final tally will end up at the lower end of either my or their range.

Here's the state-by-state breakdown. In order to hit the 13.8 million mark by the end of January, each state should have reached around 89% of my target number. As you can see, only 21 are there (8 are ahead of my projections; another 13 are exactly where I was expecting). Three states (Hawaii, Massachusetts and South Dakota) have actually already broken my 1/31 target, which is excellent. The problem is that two of the three have tiny populations, and none of the other states ahead of schedule (Utah, Connecticut, Oklahoma, Wyoming and Oregon) are huge either, so that doesn't help much.

On the down side, there are a whopping 28 states which are behind where I'd expect them to be at the moment...including big ones like Florida, Texas, Georgia and North Carolina.

Towards the bottom of the list, Louisiana has an obvious excuse: They expanded Medicaid back in July, which I forgot to take into account--Medicaid expansion actually siphoned off a good 50,000+ low-income residents who earn below 138% FPL. This is a great thing for them and the Medicaid program, and could potentially actually help the exchange risk pool...but it does mean that they're only at around 67% of target instead of 90%.

Now that all renewals (active or automatic) have been factored in, the only way to hit the 13.8 million mark is gonna be via new enrollees. As I noted earlier, last year only 1.42 million new enrollees were added in the final 37 days of Open Enrollment (around 38.4K/day). This year, to hit 13.8M, they'd have to tack on another 2.2 million, in only 31 days (around 69.4K/day).

How likely is this to happen? Well, again, if Hillary Clinton had won the Presidency and the numbers to date were exactly what they are now, I'd guess perhaps 1.7 million new enrollees would sign up in that time, for a grand total of around 13.3 million.

However, that's not the case. Donald Trump will be sworn into office in 16 days, while Congressional Republcians are tripping over themselves (literally?) to wipe out the Affordable Care Act either entirely or partly anyway. I have no idea what impact, if any, that will have on the final "surge" which I'd normally expect over the final week or so. It might flatline completely, leading to no more than 13 million total enrollees or even fewer. On the other hand, there might be a last-minute panic as people realize that this really is their last chance to receive subsidized coverage (for one year, anyway), which could lead to a dramatic spike at the end.

If you held a gun to my head right now, I'd say that around 13.3 million QHP selections nationally is a reasonable revised projection as of 1/31/17. This would be slightly below my lower range (13.5M) but still well above HHS's (12.8M). It would be roughly 5% above last year's tally...which may be disappointing, but again, given the election results, we're already way above the disaster I was expecting on Nov. 9th. It's all a matter of perspective. 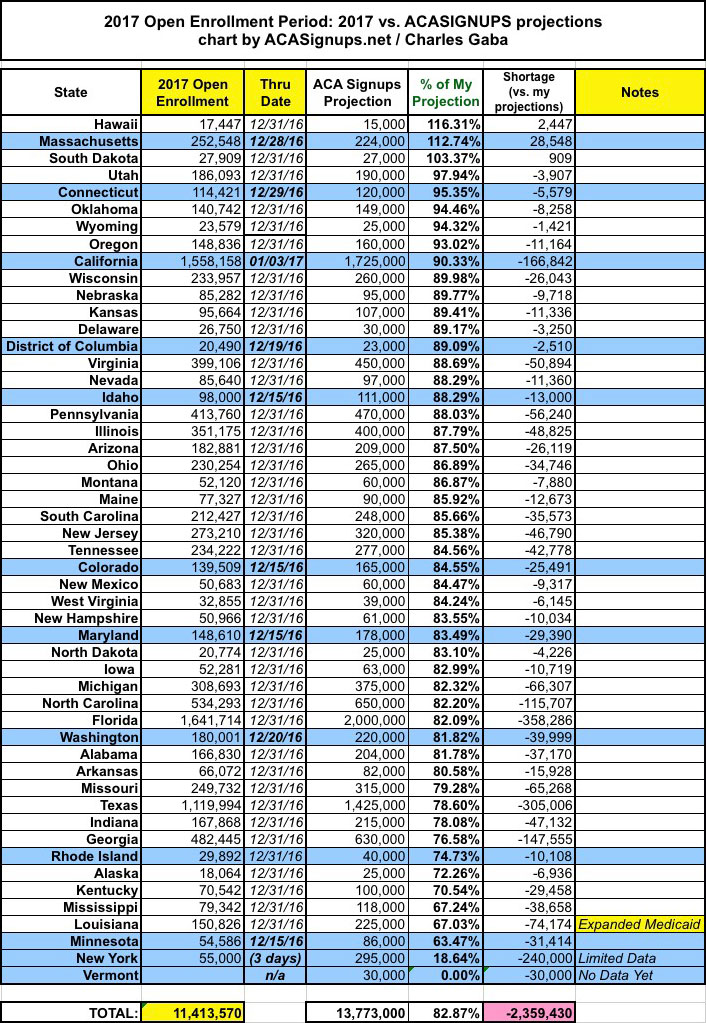 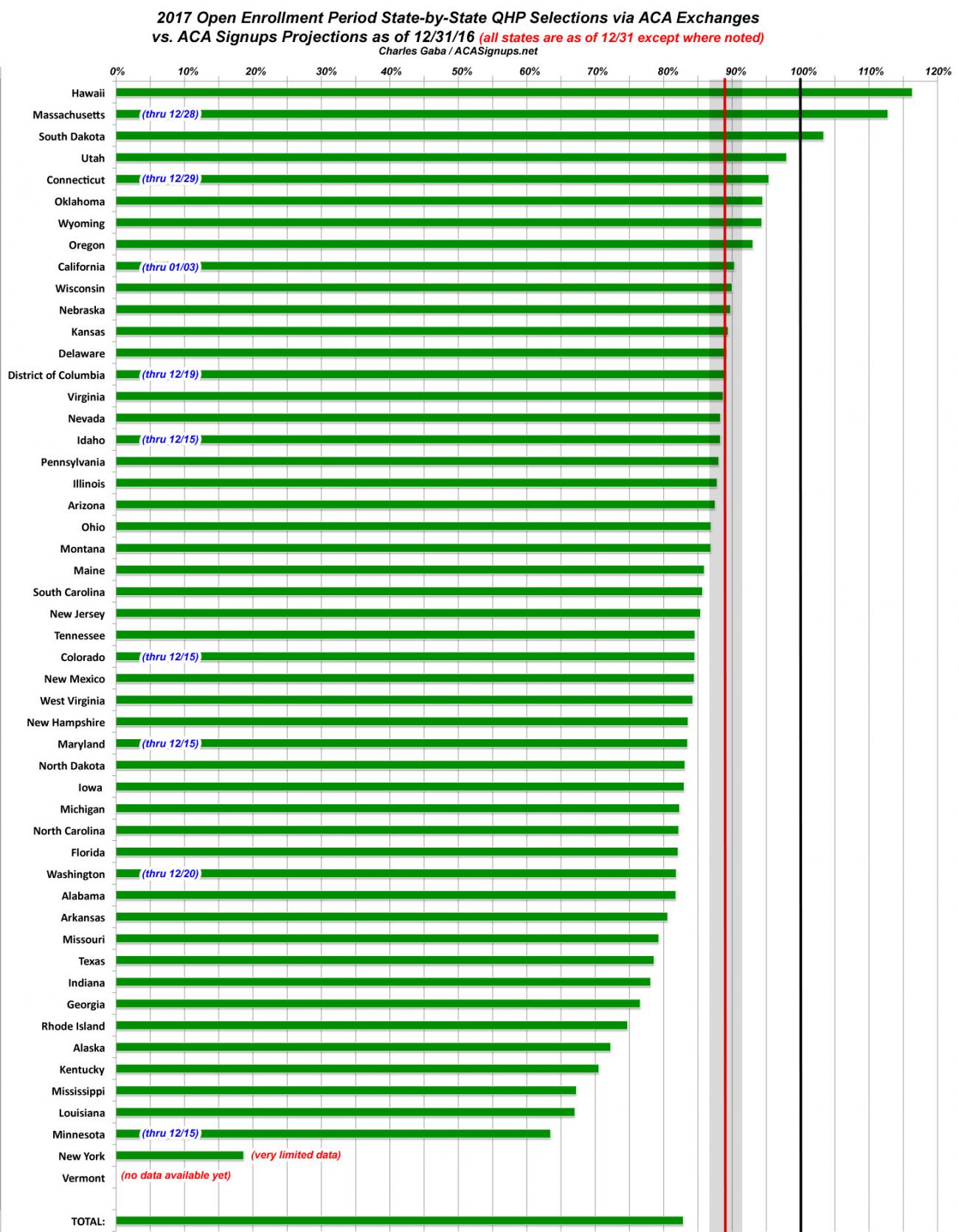 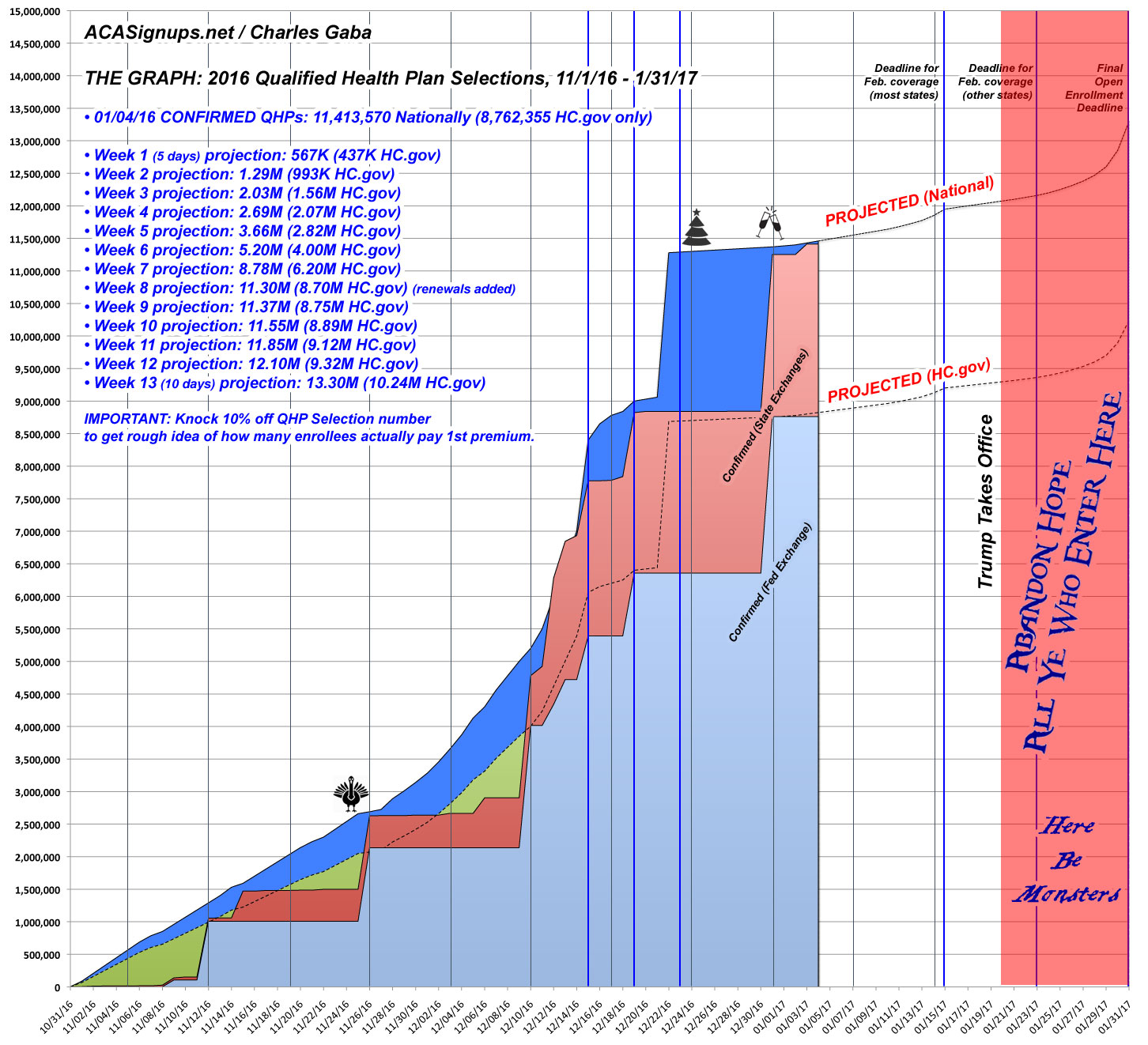