That second point is important: Most states don't actually put through auto-renewals until after the 12/15 (or 12/23 in some states) deadline for January coverage. Like Connecticut, however, Rhode Island has already automatically renewed most of their enrollees for 2017 coverage...and simply subtracts from this number those who actively choose not to renew coverage. As a result, both Connecticut and Rhode Island give the appearance of being well ahead of 2017 enrollment projections at this point, even though that might not hold up after we get past the mid-December milestone. That new enrollment number appears extremely low (just 3.6%), but again, that's hard to tell with all of the current enrollees being lumped together.

For comparison, as of 12/05/15 last year, Rhode Island was reporting 31,500 enrollees (1,592 of them new) using the same methodology, so technically they're running about 13% behind last year, although the extra two days can make a big difference (last year those 2 days made up around 3.5% of total #OE3 enrollments; in the case of Rhode Island that translated to roughly 1,180 people). 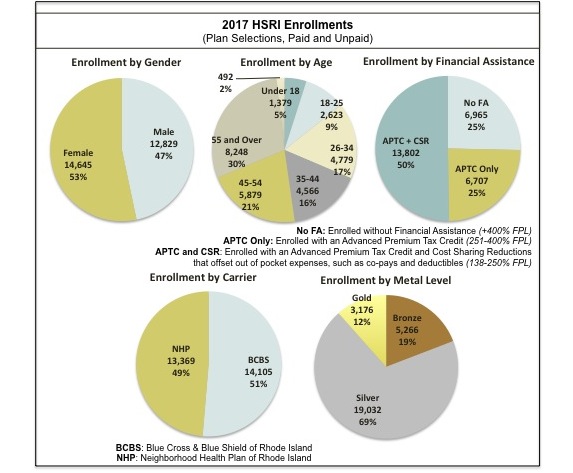 Given how little attention most ACA articles pay to the SHOP program (even I've mostly stopped writing about it), it's noteworthy that in Rhode Island, SHOP enrollment is actually running at around 17% the rate of individual QHP enrollment, which is pretty impressive.