How much did Marco Rubio screw the insurance market? $8.3 billion and counting.

As anyone who's been following the ongoing ACA Risk Corridor Massacre saga knows, the program was designed to help insurance carriers participating in the ACA exchanges smooth over the rough patches during the first 3 years by transferring a chunk of the profits from carriers which did excessively well over to carriers which did excessively poorly. Here's an overview of how the program was supposed to work, and what went wrong; the short version is this:

Under the original Risk Corridor agreement, the federal government was supposed to pay out that $2.5B regardless, either making up the difference in the next two years or simply having to eat the loss if things didn't work out.

Unfortunately, Marco Rubio and the Congressional Republicans decided to change the Risk Corridor rules in the middle of the game (literally in the middle of the 2015 Open Enrollment Period), during the infamous CRomnibus bill debate. They slipped in an amendment to the "must-pass" continuing resolution bill (the one needed to keep the government running at all) which prevented the government from making good on any Risk Corridor shortfall payments. This meant that HHS was unable to pay that $2.5 billion balance owed to the carriers. As a result, they only ended up receiving 12.6¢ of what was owed to them.

The HHS Dept. tried to mitigate the damage by pointing out that there were still 2 more years in the program; any Risk Corridor revenue generated in 2015 would go to cover the remaining balance owed from 2014 first.

Unfortunately, that's not working out too well either:

Section 1342 of the Affordable Care Act directs the Secretary of the Department of Health and Human Services (HHS) to establish a temporary risk corridors program that provides issuers of qualified health plans (QHPs) in the individual and small group markets additional protection against uncertainty in claims costs during the first three years of the Marketplace.

A table follows, listing every carrier across the country which owes money to or is owed money from the Risk Corridor program for 2015, as well as how much 2015 funding will be paid out to them to cover what's still owed for 2014. It's a long list, and some of the numbers are pretty big.

Unfortunately, it doesn't include a national total of any of the numbers involved, but someone took the time to add it all up for me; I'll verify these figures soon, but they seem reasonable to me:

They also provided the dollar amounts for select major carriers, along with the national tally, which I've compiled into a table below: 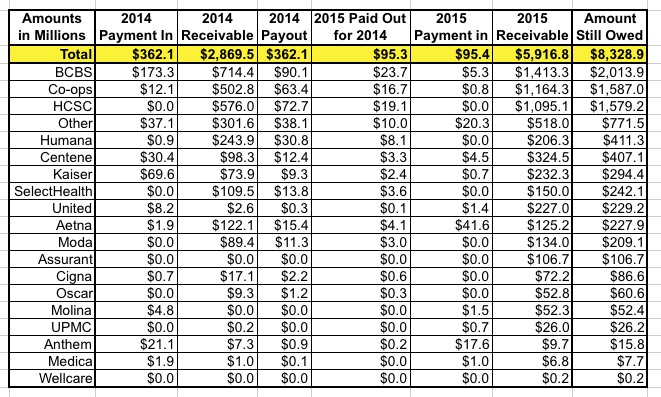 Of course it's theoretically possible that the 2016 numbers will end up saving the day...but given that several major carriers have bailed on the exchanges due to ongoing losses this year as well, that's pretty unlikely. So far a total of $458 million has come into the kitty while $8.79 billion in losses have been incurred. Unless the 2016 payments in end up being at least $8.3 billion more than whatever the 2016 receivables out are, the carriers are mostly gonna take a bath on the 3-year program...and even if they're paid in full, that's not gonna bring those liquidated Co-Ops back from the dead.

Of course, from a Republican POV, this is $8.3 billion which they've "saved" U.S. taxpayers...except that the real-world effect of "saving" that money...except that it did so by breaking a legal contract between the federal government and hundreds of private corporations, while helping wipe out over a dozen taxpayer-funded Co-Ops, the net effect of which, as I summarized back in February:

I actually need to update this list a bit, however, as there have been several further developments:

UPDATE: OK, I've compiled the entire list into a spreadsheet to tally up the total, and sure enough, my source had it right (be warned, this is a long list): 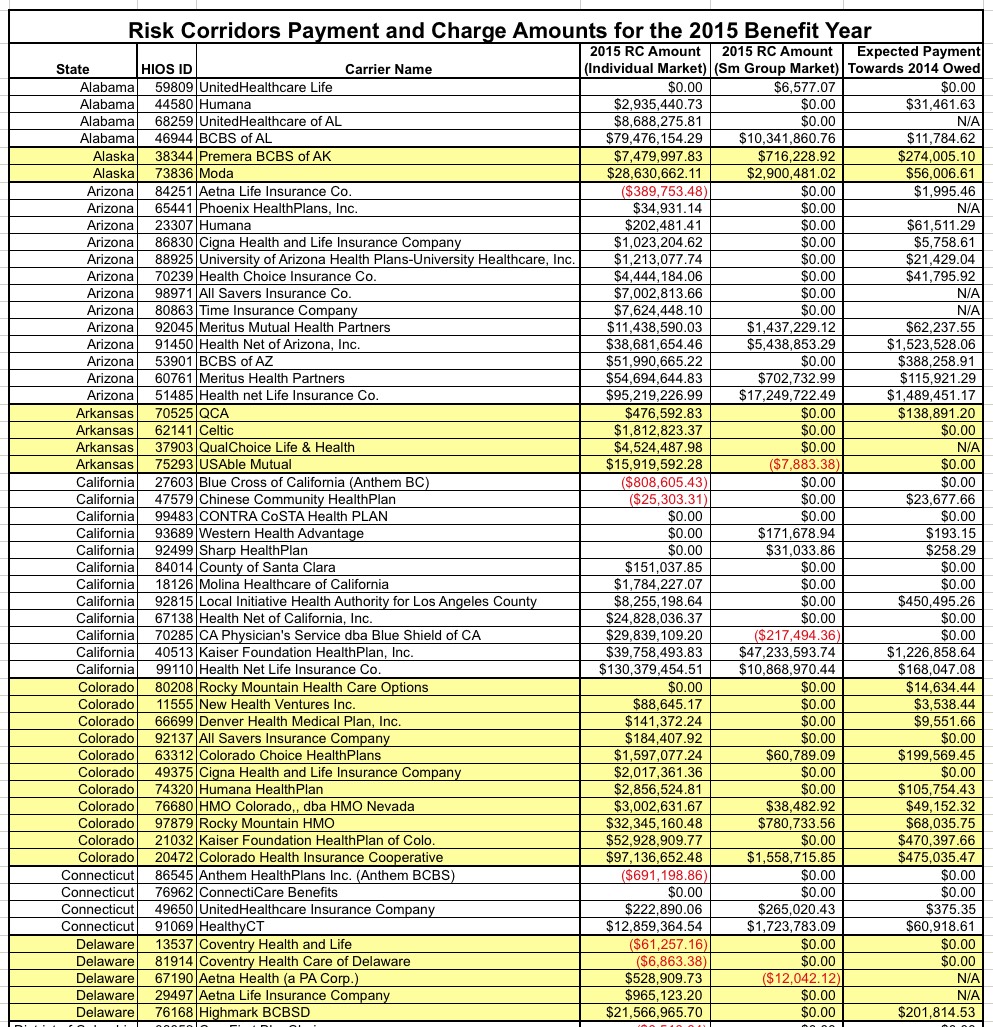 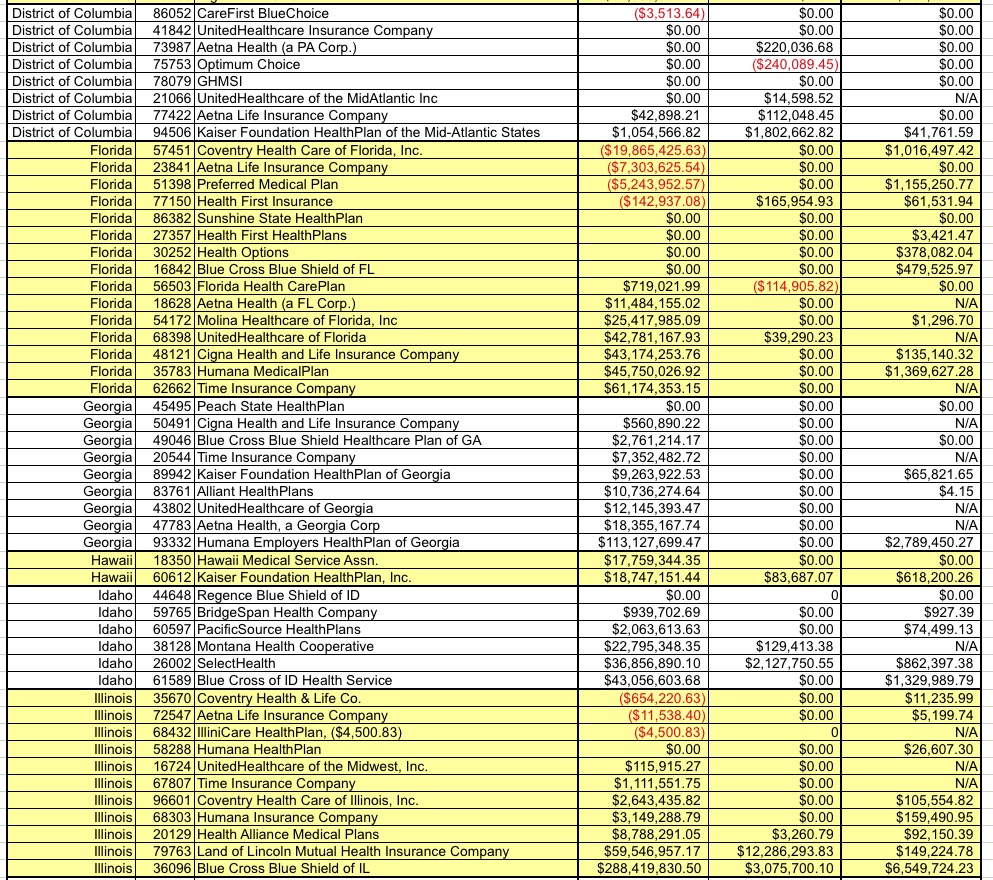 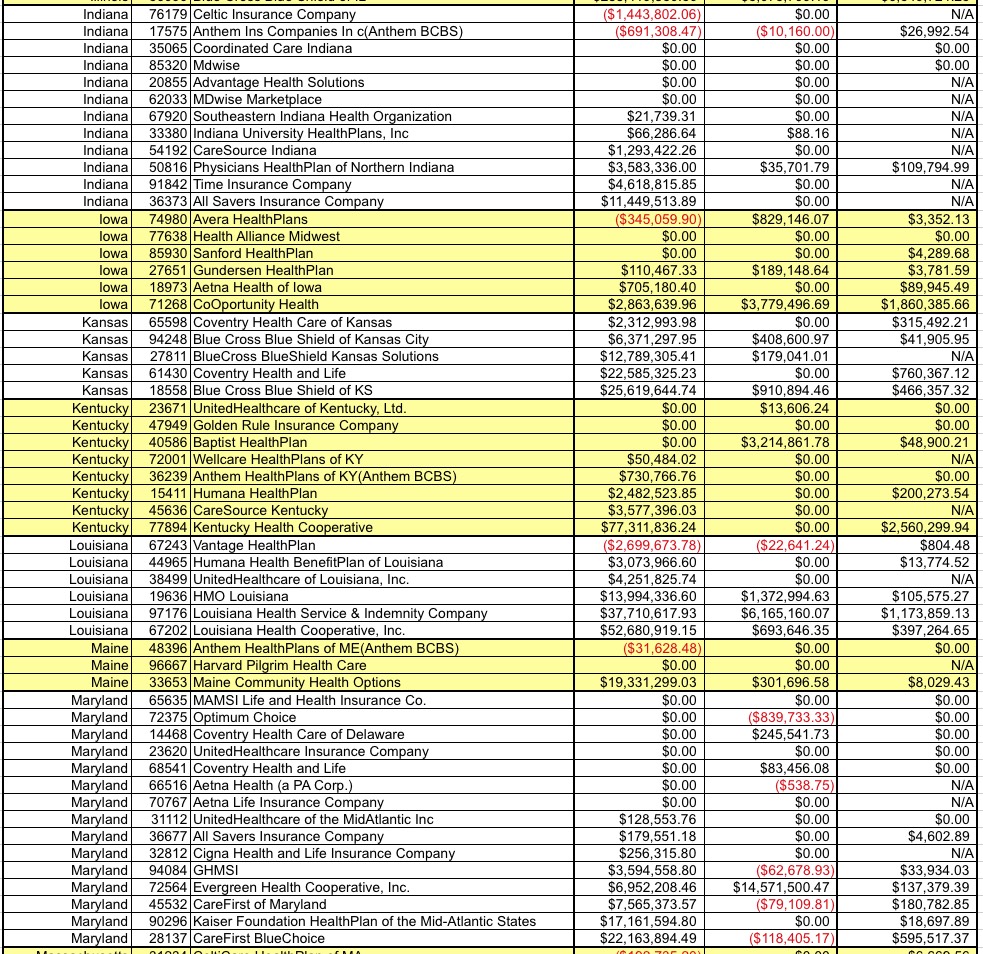 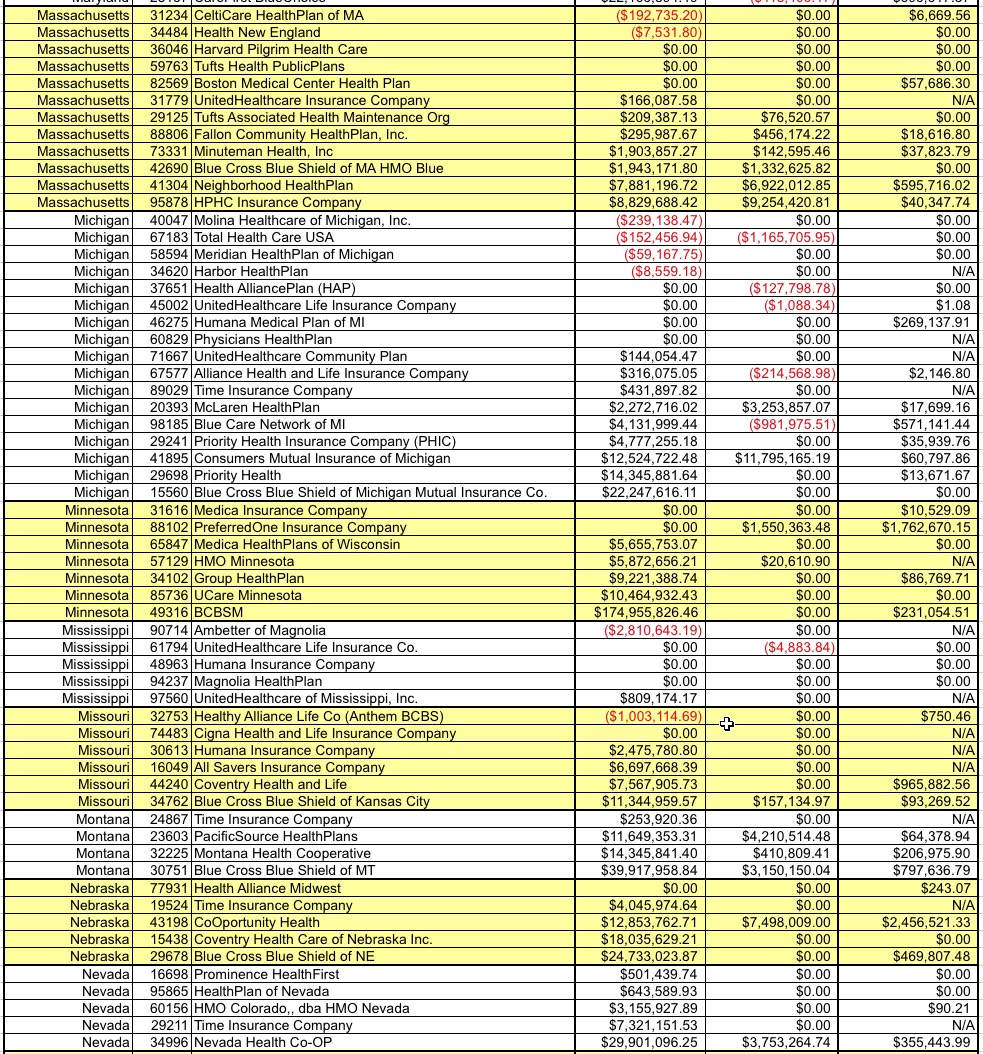 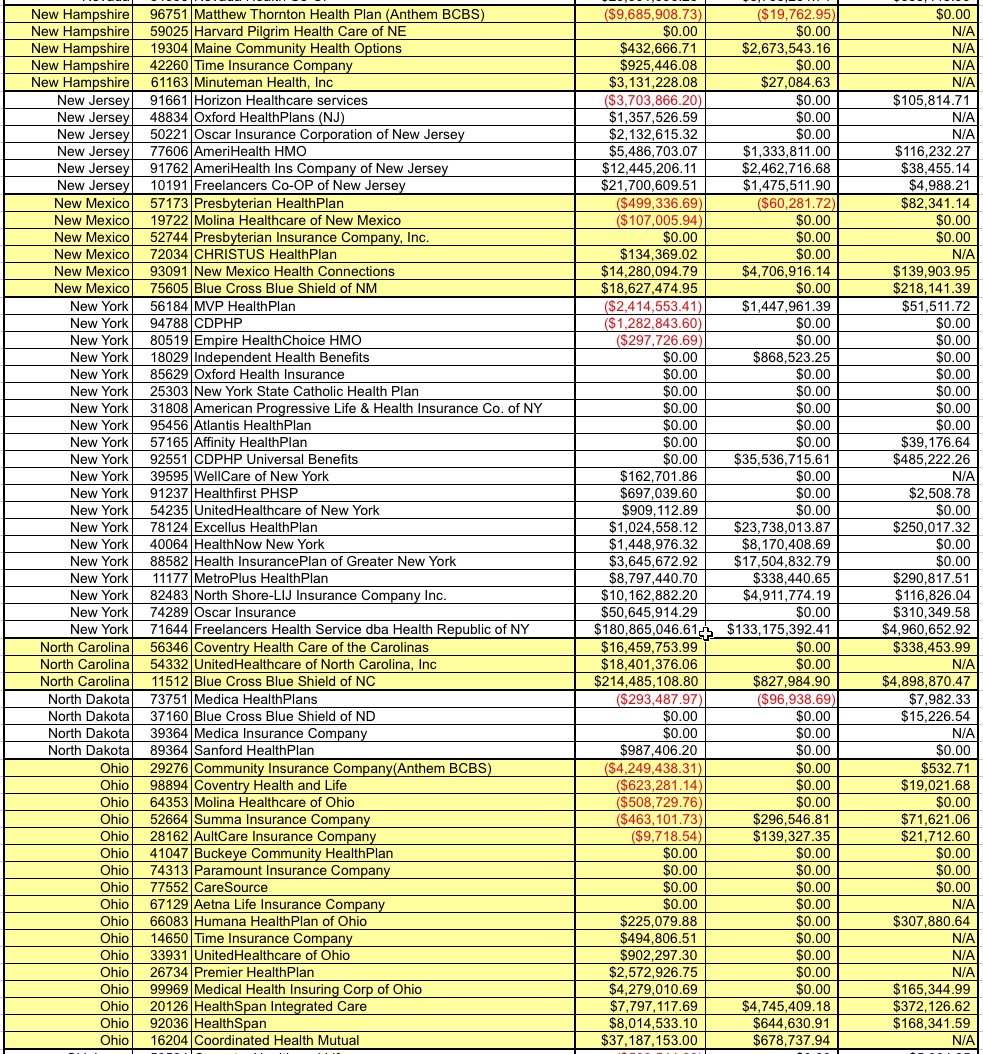 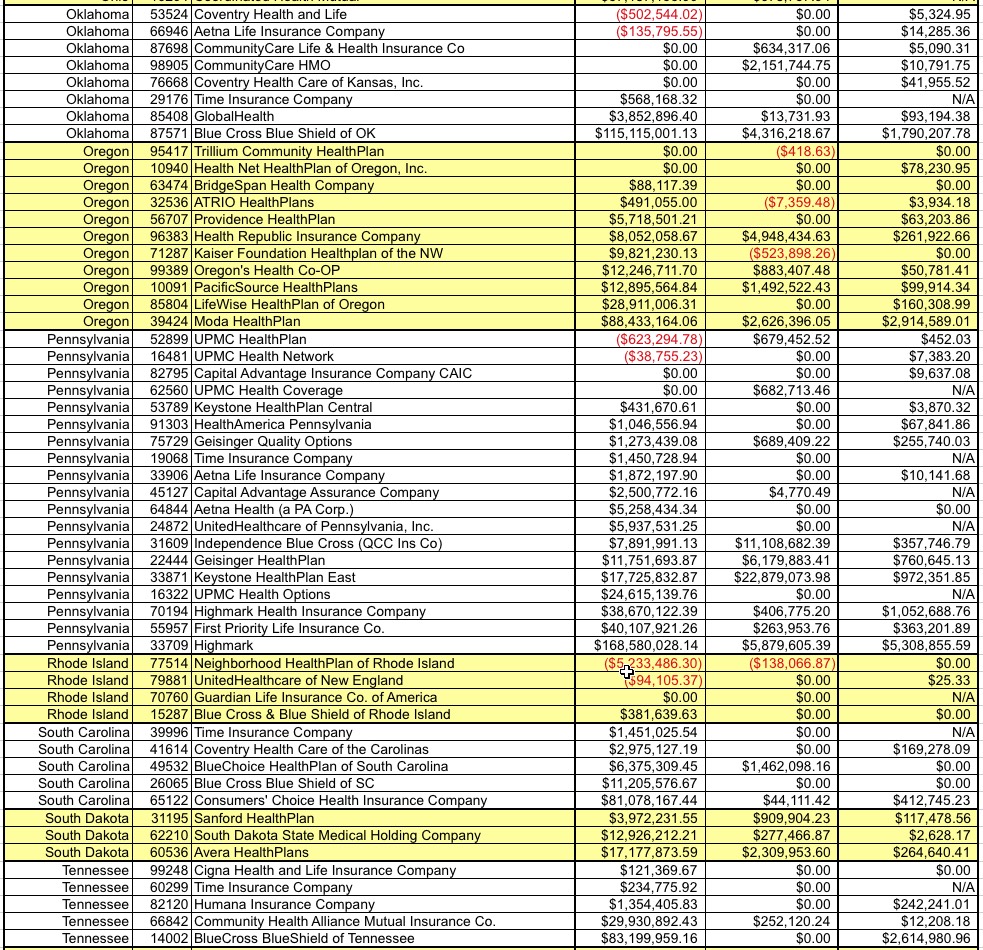 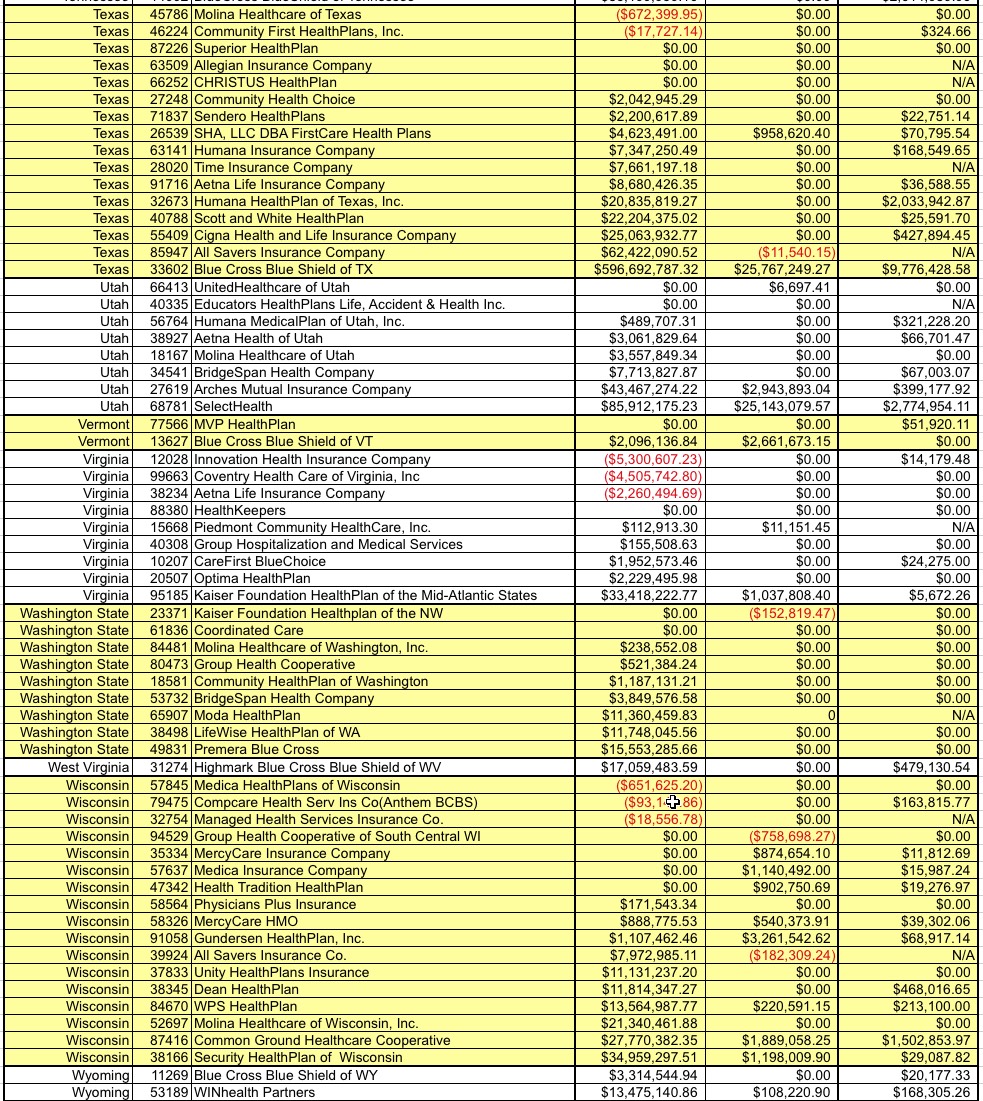