At the beginning of 2016, the Kaiser Family Foundation ran an analysis of just who the remaining uninsured Americans are by income, employment status, legal residency status and so on. They came to some interesting and important conclusions, many of which I incorporated into my own massive "SHOW YOUR WORK" pie chart project back in April, which attempted to break out the entire U.S. population by type of healthcare coverage (or the lack thereof, in the case of the uninsured).

Yesterday, Kaiser published a completely updated version of their analysis. In addition to having more recent data to work with (including the increased number of ACA exchange enrollees, the increased number of people covered by Medicaid thanks to ongoing ACA expansion progress, etc), they also made some changes in their methodology. The most obvious change is that their estimate of the total uninsured (non-elderly only; you'd have to bump the number up by perhaps 1 million more if seniors were included) has dropped from 32.3 million to 27.2 million nationally.

In addition, however, the proportion of people falling into different categories has shifted as well. Here's how they break it out: 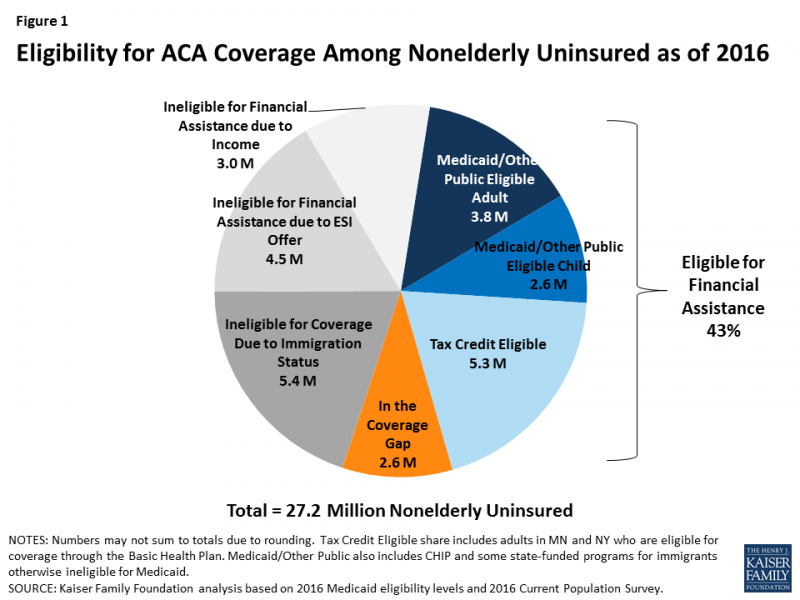 In the past, I've focused on the fact that millions of those still uninsured--undocumented immigrants as well as those in the "Medicaid Gap"--simply can't be blamed on a "failure" of the Affordable Care Act for a simple reason: The way the law is either written (or interpreted by the Supreme Court) makes it simply impossible for the law to cover these people. The ACA doesn't allow undocumented immigrants to enroll in either Medicaid or ACA exchange policies, period (even if they're willing to pay full price, although they can still enroll in off-exchange policies). Meanwhile, the "Medicaid Gap" was created after the Supreme Court left Medicaid expansion up to the states, 19 of which are still refusing to do so. Combined, that's 8.0 million people, or 29% of the total uninsured who simply cannot be helped by the ACA unless there's changes in the law at either the federal level or on a state-by-state basis.

However, there's another chunk of the pie chart above which really needs to be addressed: The 6.4 million people (about 24% of the total) who, according to KFF, are already eligible for either Medicaid or the CHIP program:

Here's what's so frustrating about this: When it comes to the 5.3 million who are eligible for tax credits, you can certainly argue that the exchange policies might still be too expensive for many of them, even with financial assistance...but Medicaid/CHIP costs, in most cases, almost nothing for the person enrolled. In most cases, all they have to do is actually go through the application process and they'd be covered, even if they never actually use that coverage.

The challenge here seems to be similar to voter registration. It's relatively easy to do, costs nothing...yet millions of people don't bother to do so. Whether they actually vote once registered isn't even the point (they should, of course, but that's a separate discussion); the point is that you should at least register to vote, just as if you're eligible for Medicaid/CHIP there's little reason not to at least enroll, whether you plan on visiting the doctor or not.

The ACA has done an amazing job of closing this gap--remember, in addition to the 10 million or so people who've enrolled via ACA expansion, there's another 4 million or so who fall into the "woodworker" category...people who were already eligible for Medicaid prior to the ACA but who only signed up for the program thanks to the increased outreach/education campaign as well as the streamlined enrollment process which the ACA helped implement. However, if Kaiser's numbers are accurate, there's still a long way to go on this front. If every person eligible for Medicaid/CHIP actually enrolled, the uninsured rate would drop by an additional 24%...down to perhaps 21 million people, or just 6.5% nationally.