Due to an ongoing external committment, I'm not able to write up a full analysis of this, but CMS has issued their "Mid-Year Effectuation Report" which updates at least some of the ACA exchange stats for the first half of 2016:

First Half of 2016 Effectuated Enrollment Snapshot

For the first half of 2016, an average of 10.4 million consumers had effectuated Health Insurance Marketplace coverage – which means those individuals, paid their premiums and had an active policy through one of the Health Insurance Marketplaces nationwide as of that date. [i] Effectuated enrollment is generally lower in January and February, since coverage purchased in the weeks before the final Open Enrollment deadline does not begin until March. June effectuated enrollment was slightly higher than the average for the first half of the year, about 10.5 million.  These amounts do not include individuals enrolled in coverage through New York and Minnesota’s Basic Health Programs, which currently enroll about 650,000 people.

First, a sidebar: The BHP number is interesting, as the last hard enrollment number I have for NY's BHP program (called "Essential Health" there) was around 380,000 as of the end of January. Unlike QHPs, the BHP program is open for enrollment year-round, so that number was likely higher as of June, but if not, that leaves 270,000 enrolled in Minnesota. This is an important reminder that while 83,000 Minnesota residents have enrolled in their BHP program ("MinnesotaCare") via the MNsure exchange, many others do so via traditional methods.

As for the rest...this is actually a bigger drop-off in effectuated enrollment than I was expecting. I assumed a similar pattern to last year, with roughly 15% net attrition as of the end of June, which would have resulted in roughly 10.8 million people having effectuated exchange policies as of 6/30/16. Instead, they say it was around 10.5 million. Based on this new data, I'm revising my net attrition estimates for the rest of the year to perhaps 9.8 million as of the end of September. If so, this would result in ending 2016 with around 9.2 million people enrolled in effectuated exchange policies, for a 2nd-half monthly average of around 9.9 million and a full-year monthly average of around 10.1 million. 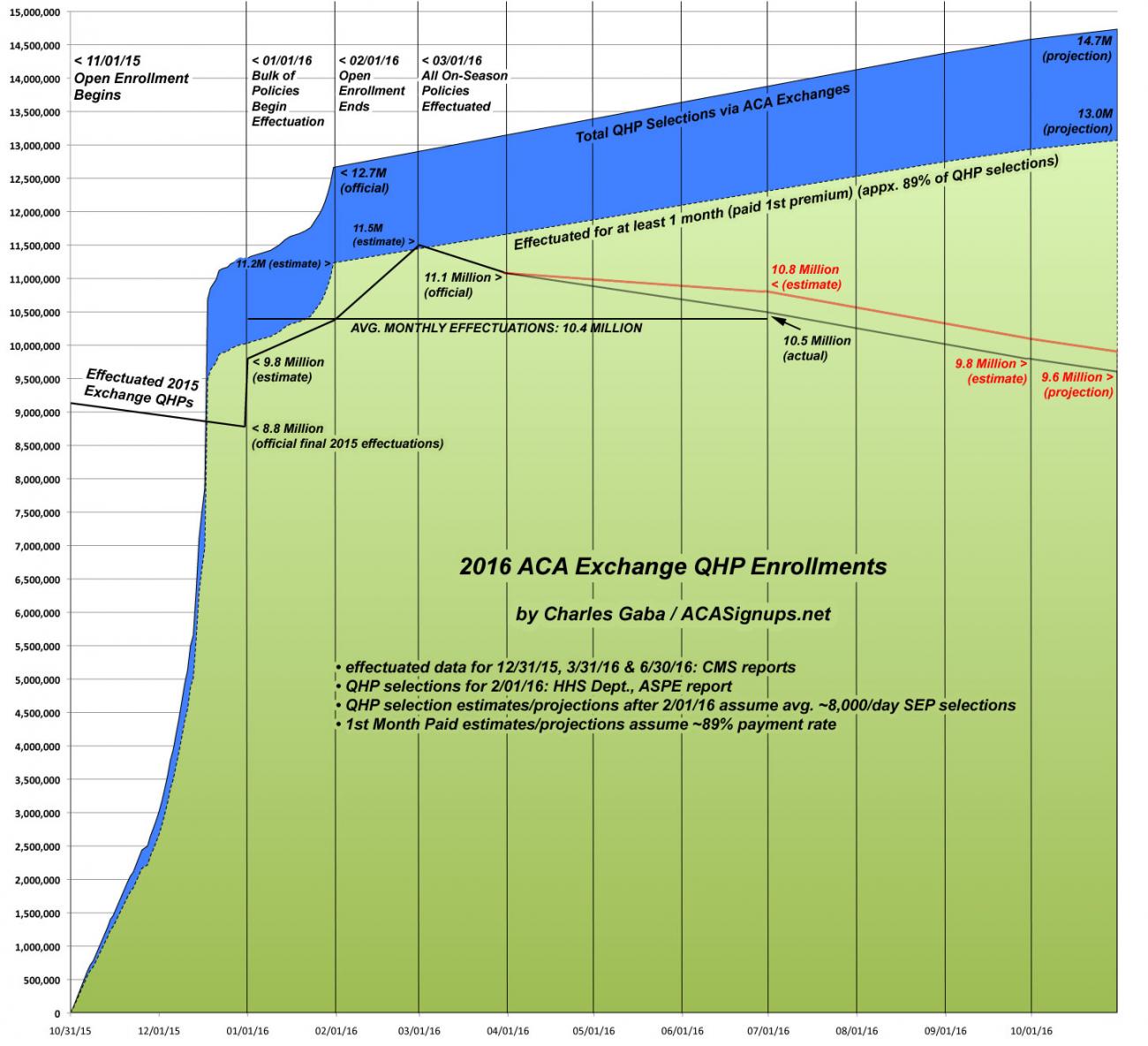 As CMS announced in June, the agency will now be reporting effectuated enrollment data semiannually, once for the first six months of the year and once for the full twelve months of the year, based on the average number of effectuated enrollments and disenrollments over the relevant time period. Average effectuated enrollment provides a more meaningful metric of Marketplace participation, since it captures all enrollments over the time period and is less subject to monthly variation that is not meaningful. The new reporting will also facilitate comparisons to projections made by the Congressional Budget Office, which reflect average enrollment throughout the year.  Marketplace issuers associated with the Federally-facilitated Marketplace have fully transitioned to a new payment system using policy-based data, rather than issuer-aggregated reporting, and the new payment system allows for more refined enrollment reporting.  As CMS and issuers now adjust to the new reporting system, state-by-state data is not included in this report as that data is still being confirmed.

I'm obviously disappointed that they haven't provided the state-by-state data, but hopefully that will be forthcoming. I'm also disappointed that it sounds like they're scrapping the quarterly reports and going with only 2 per year going forward...the second of which won't come out until well into 2017. I'm actually glad that they'll be providing the monthly average effectuations as well (as they note, this matches the CBO's model), but the core of ACA Signups relates to the number of people enrolled/effectuated at given points in time as well.

The Marketplaces make sure that people can get coverage when they need it, including when they have a period of time transitioning between forms of coverage.  CMS expects enrollment to fluctuate as consumers find other coverage or experience changes in life circumstances such as employment status or marriage, which may cause consumers to change, newly enroll in, or terminate their Marketplace plans.

This effectuated enrollment report also includes an analysis below of the reduction in the number of consumers experiencing terminations of coverage through the Marketplace or adjustments to financial assistance due to unresolved data matching issues.

Of the approximately 10.4 million consumers who had effectuated Marketplace enrollments on average from January 1 through January 30, 2016, about 84 percent, or about 8.8 million consumers, were receiving APTC[ii] and 56 percent or nearly 5.9 million consumers were benefiting from cost sharing reductions (CSRs) to make their coverage and covered services more affordable. CSRs are generally available if a consumer’s annual household income is between 100 percent and 250 percent of the Federal Poverty Level (FPL), the consumer is otherwise eligible for APTC, and the individual chooses a health plan from the silver plan category.

This is pretty much unchanged from March, although I'm actually a bit surprised that the percentages of each went down ever so slightly (from 85% to 84% for APTC and from 57% to 56% for CSR). I assumed that a higher percentage of those paying full price would drop out; instead it looks like the net attrition has been an even spread.

Some good news to report on the technical/clerical side:

In operating the Federally-facilitated Marketplaces and the HealthCare.gov platform, CMS is committed to providing access to coverage and financial assistance to individuals and families who are eligible while maintaining strong program integrity protections. Throughout 2014, 2015, and into 2016, CMS has worked to resolve consumers’ data matching issues, including for those individuals whose citizenship, immigration status, or household income application information did not match information in our trusted data sources.

On the other hand, this hasn't resulted in a lower overall attrition rate. Net effectuations have dropped at a faster rate than last year, which basically means that more people have chosen to drop their coverage this year as opposed to being kicked off involuntarily, which I guess is an improvement depending on your POV.

[i] Individuals effectuate their enrollment by selecting a plan and paying their first month’s premium. This first semi-annual Marketplace effectuated enrollment snapshot detailing at a state by state level how many consumers, on average throughout the six month period, have an effectuated enrollment and, on average over the six month period, how many are receiving financial assistance. Today’s snapshot also provides an update on the average number of individuals where the Marketplace took action on unresolved citizenship or immigration status, or household income data matching issues.  Active policies include those for enrollees who have paid for the current month and those for enrollees in a grace period for non-payment. Certain grace periods can vary by state and issuer. For those individuals receiving APTC, issuers are required to give enrollees a three month grace period. 45 CFR §§ 155.430 and 156.270.