The state Dept. of Insurance has released their approved rate hikes for 2017, and it's bad news in two different ways. First, the overall full-price average rate increase looks like it'll be roughly 32.5%...over 8 points higher than the original rates requested by the carriers. Secondly, even with those higher increases, two more indy market carriers (Keystone Health Plan and Geisinger Quality Options) are pulling off the exchange, although both will continue to offer off-exchange plans.

It's important to be careful with the full carrier names here, because they often operate under several different very similar ones (Keystone Health Plans vs. Keystone Health Plan East, for instance, which is not pulling off the exchange).

So here's what's happening with each:

Keystone Health Plans: In their original filing, they listed 37,479 total individual plan enrollees. In the final filing this number is down to just 1,822:

1. This is the number of 2016 enrollees who will be renewed into their existing plans, or into a new plan offered by the same company, in 2017. This number is lower than the company’s initial estimate because the company reduced the number of plans it is offering and will not be offering on the federal exchange in 2017.

...With this goal in mind, the Department allowed insurers to adjust their rate filings to reflect their emerging 2016 experience and their concerns regarding potentially large influxes of enrollment due to the ongoing volatility in the individual market. Keystone adjusted its filing to increase its estimate of morbidity, or how much medical care its enrollees will need, from a 1% decrease over last year to a 42% increase. We asked the company to remove the 2% it had included for profit/contingency, in accordance with the Departmental surplus order that applies to Blue Cross Blue Shield companies. The average final rate increase approved for this company is 32.4%, ranging from 4.0% to 57.0%. 2 Keystone ultimately decided that it would stop offering individual market coverage on the federal exchange, healthcare.gov, in 2017. A sister company, Capital Advantage Assurance Company, will continue to offer plans on the exchange in 2017.

Geisinger Quality Options: In their original filing, they listed 6,300 people enrolled in individual plans (both on & off the exchange). The final filing has this number down to...zero:

1 After submitting the initial rate filing, Geisinger Quality Options decided that it would offer only one off-exchange plan in the individual market in Pennsylvania in 2017, and discontinue all other plans in the individual market. The plan that will be offered in 2017 will be a new plan, and does not have an associated rate increase.

They're (just barely) sticking around off-exchange with exactly 1 brand-new plan (likely just a token to allow them to get back on the exchange next year if they wish; if they pull out completely they're banned from the exchange for 5 years), and since it's a new plan, the premiums can't be compared to the existing ones. Therefore, there's no actual "rate change". Between Keystone and Geisinger, that's another 42,000 people who will have to shop around this fall.

In addition, while I previously knew that Aetna has around 47,000 people enrolled, I had no idea how many of them were on vs. off-exchange. With today's final filing, I know that they have 16,686 off-exchange enrollees, meaning around 30,600 on-exchange enrollees who will have to shop around. I still don't know how many UnitedHealthcare indy market enrollees will have to do so, but the other three combined are around 72,500.

Add it all up, and here's the final situation in Pennsylvania ahead of 2017 Open Enrollment: 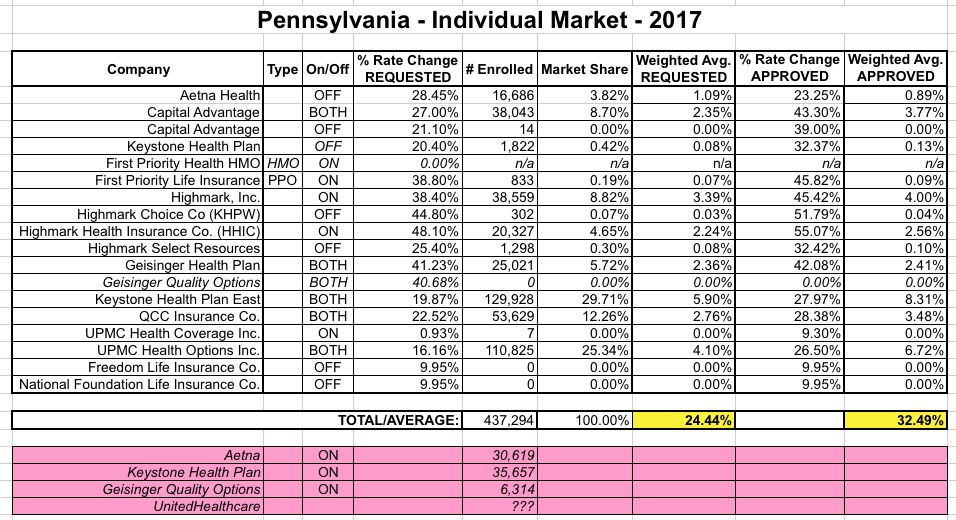 Meanwhile, things are looking quite stable over on the Small Group Market side of the aisle, with quite a few requests being pruned and an overall statewide average of roughly 7.1%: 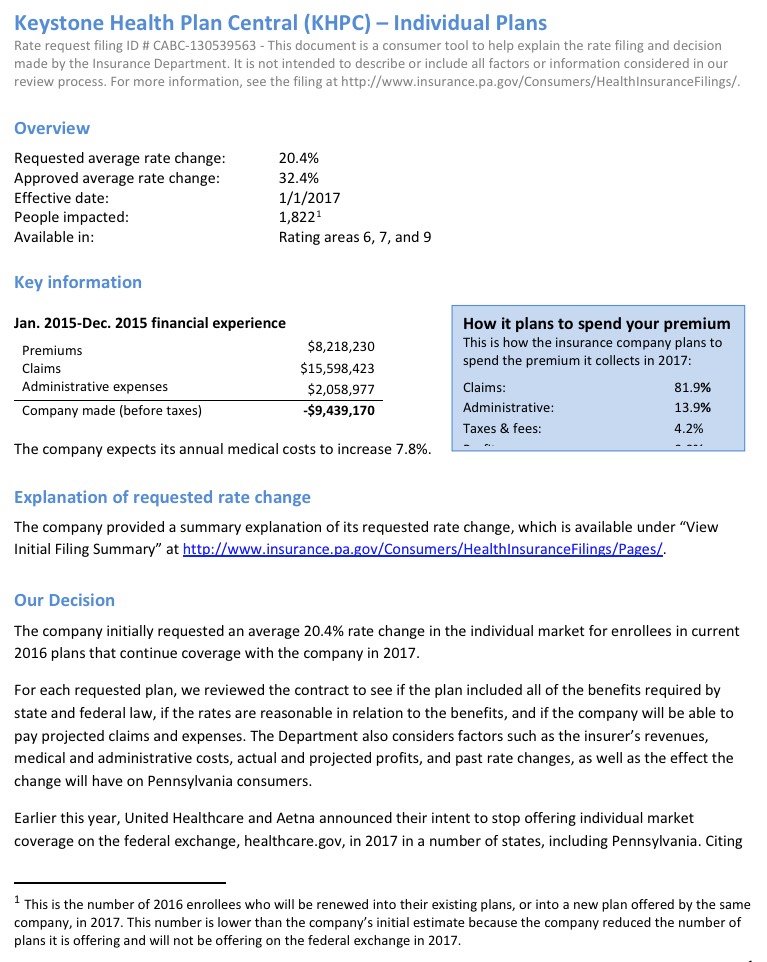 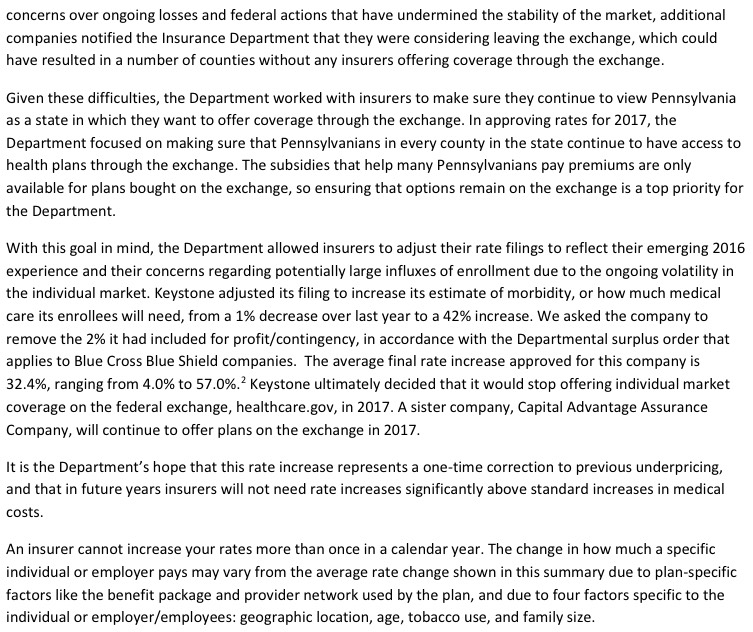 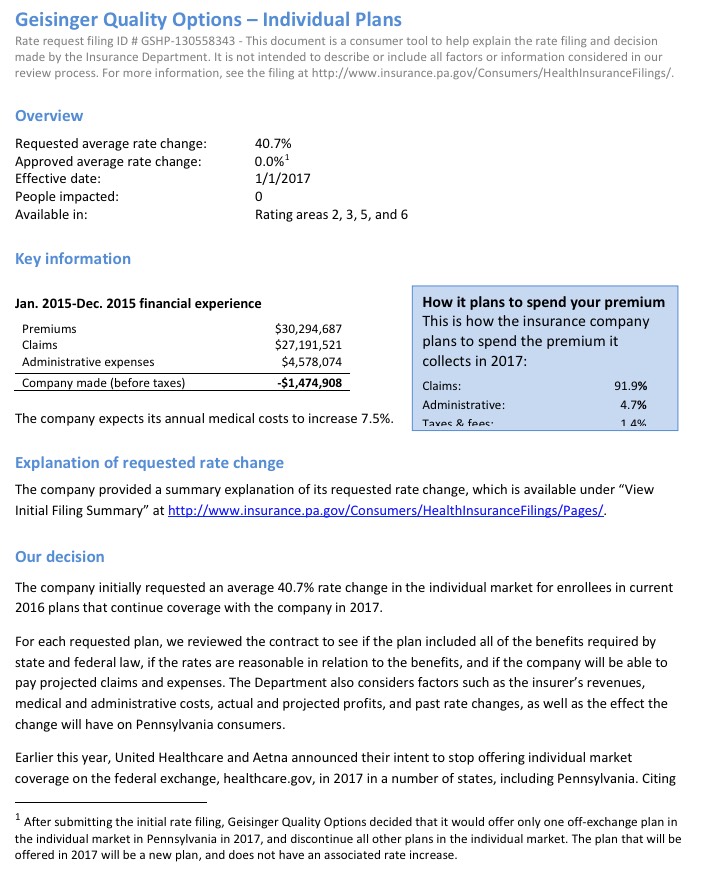 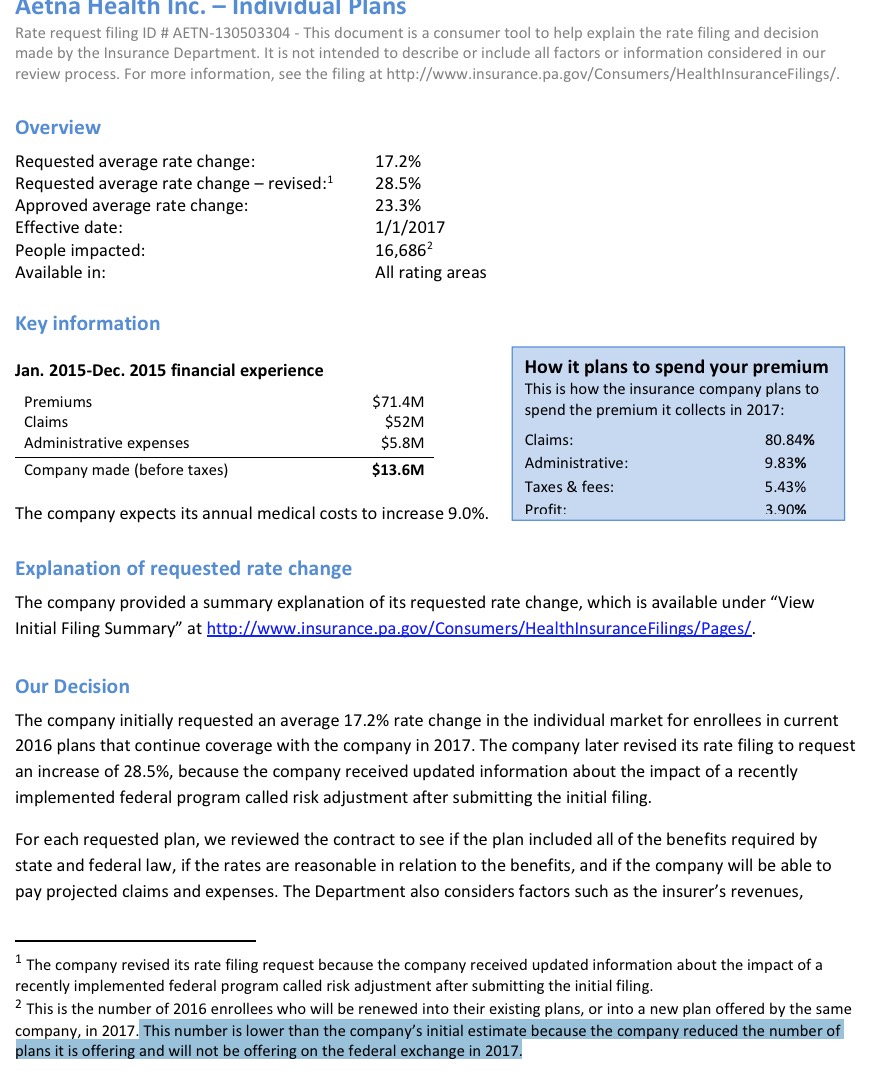