The Connecticut average requested rate hike has jumped around a lot over the summer. It started out at roughly 21.3% back in June, then increased to 22.2% after the HealthyCT Co-Op announced they were closing up shop. Then, several of the carriers submitted revised rate hike requests, bumping the average up further to around 26.8%.

Well, over the holiday weekend, the CT Mirror reports that the CT Dept. of Insurance released their response to the requests. There were also yet more last-minute filing changes. I've updated the spreadsheet with both the final requests as well as the approvals...but there are a copule of major blank spaces I still have to fill in:

Most Connecticut health insurance plans sold through individual and small group markets will undergo steep rate hikes next year, although in some cases, the prices will not go up by as much as carriers had sought.

Since Anthem and CTCare combined make up over 60% of Connecticut's individual market, I really can't come to any conclusions aobut the overall approved increases. The best I can do for now is fill in the other 5 approved rates and see what things would look like if the Anthem/CTCare requests had been approved as is. Meanwhile, I've updated the requests, and have done the same thing on the small group side of the aisle.

Here's what it looks like for the moment. The average request jumped still further, to 31.1%...while the approved average sits at 27.7% only if Anthem and CTCare requests were approved, which they weren't. I can't imagine the CT DOI would approve rates any higher than these for Anthem or CTCare (and in fact, I'm not sure why they didn't just issue lower approved rates in the first place, as they did for some other carriers, instead of sending the companies back to resubmit their requests yet again), so 27.7% is presumably the maximum for the state. Unless, of course, one or both carriers decides to drop out entirely.

Meanwhile, there's a similar situation on the small group side: A revised request of 15.5%, and a "non-final" approval of 13.9%.

Also important: I have no idea where the CT Mirror came up with the "25% / 13%" averages. There's no way to get an approved average yet, and even if you strip out Anthem/CTCare from the indy market entirely, the average for the remaining carriers sits at 18.4%, not 25%. Weird. 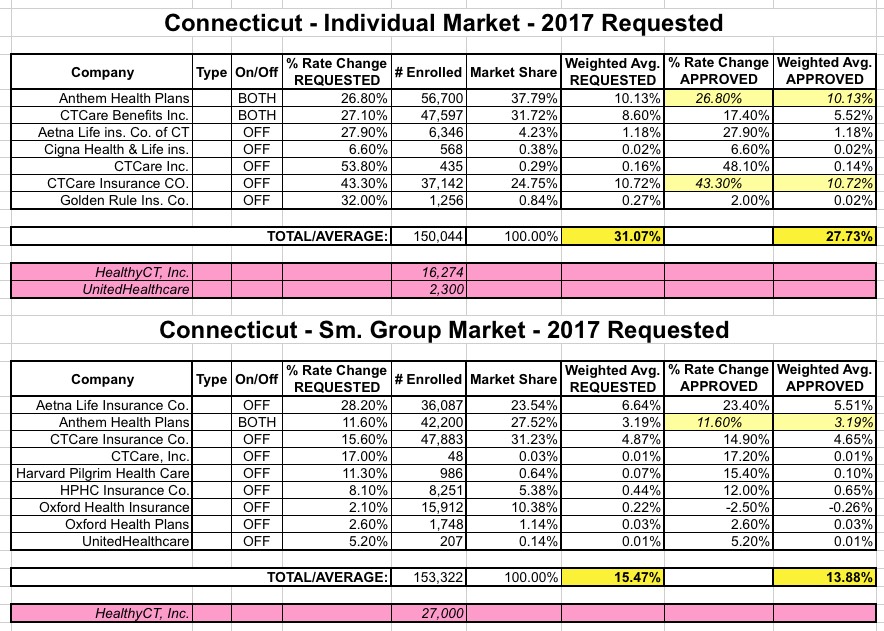