HHS Dept: Vast majority of exchange enrollees will be protected from premium hikes*

With the growing concerns over expected large premium rate hikes next year, combined with the Big Announcements that major exchange players like UnitedHealthcare, Humana and Aetna are dropping out of most of the ACA exchange markets they're currently participating in, the HHS Dept. has obviously been under quite a bit of pressure to reassure exchange enrollees (both current and potential) to stay the course and not panic.

Thus, it's not surprising at all that an hour or so ago they released a new report which reminds people that nearly 4/5 of current ACA exchange enrollees will still be able to find an exchange-based Qualified Health Plan for $100 or less per month (and 3/4 could find one for $75 or less per month) after applying APTC assistance in the event of an across-the-board 25% premium rate increase in 2017:

Previous ASPE analyses have shown that both advance payments of the premium tax credits (APTC) and consumer shopping behavior work to mitigate increases in net premiums experienced by consumers in the Health Insurance Marketplace from year to year. For example, last year, some observers suggested based on rate filings that consumers would experience double-digit increases in 2016. But, after taking into account shopping, the increase in the average premium among HealthCare.gov consumers was 8 percent between 2015 and 2016. Meanwhile, among the 85 percent of HealthCare.gov consumers with APTC, the average monthly net premium increased just $4, or 4 percent.

In this brief, we examine how the combination of tax credits and the opportunity to shop around for coverage through the Marketplace would protect consumers in a hypothetical scenario with much higher premium increases in the Marketplace than occurred last year. Our analyses (and impacts of hypothetical rate increases) are restricted to consumers who purchase insurance through the Marketplaces, with a particular focus on the majority of these consumers who receive APTC. Focusing on a hypothetical scenario of a 25 percent increase in premiums for all Marketplace qualified health plans (QHPs) in HealthCare.gov states from 2016 to 2017, we show that the overwhelming majority of Marketplace consumers would be able purchase coverage for less than $75 per month, just as they could in 2016.

In fact, due to the unusual formula used to calculate the APTC amount (based not only on the enrollee's income, location, age and household size, but also on the 2nd lowest-priced Silver "benchmark" plan available on the exchange), this not only holds true but actually increases slightly even when the hypothetical rate hike is higher (say, a whopping 50%): 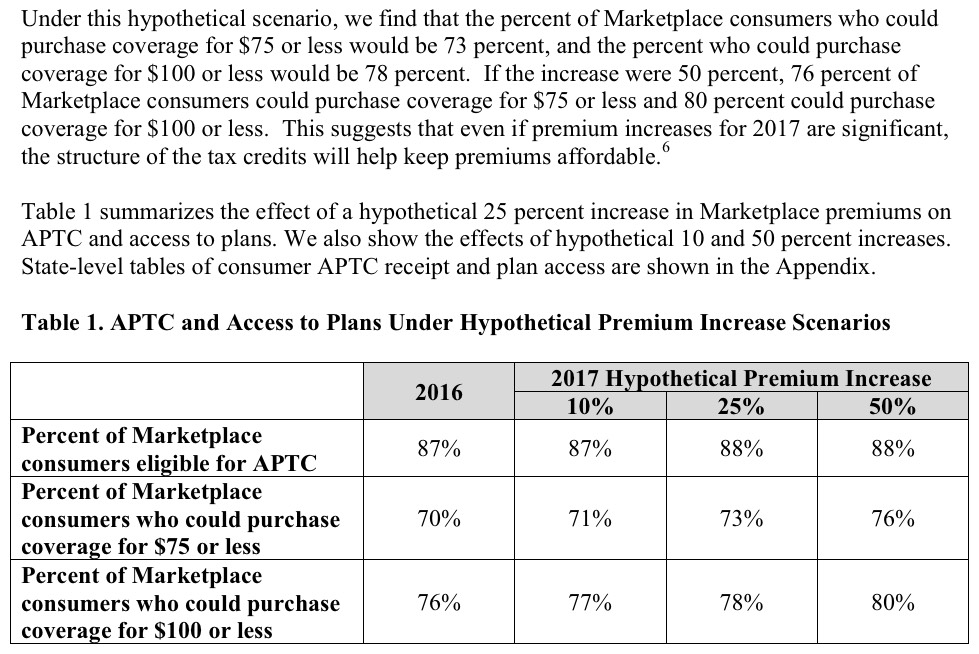 Some important points to keep in mind here:

Having said that, there are some important caveats to keep in mind here:

The problem, as always, is that those 9.4 million people only make up around half of the total individual market. The other half (around 1.7 million on the exchanges and another 7-8 million off of the exchanges) have to pay full price for their individual policies; those folks are bearing the full brunt of the rate hikes, nor do any of them qualify for CSR assistance. That's the reason why I do my best to include all ACA-compliant policies (both on and off-exchange) when I estimate the annual rate hike averages, and I do so assuming the full, unsubsidized premium amounts.

Prior ASPE research has illustrated that shopping by consumers during open enrollment plays a very important role in keeping premiums affordable for consumers.2 Among 2015 consumers who re-enrolled in the Marketplace for 2016 coverage, 43 percent chose to switch plans and realized substantial savings by doing so. Compared to what they would have paid if they had remained in their 2015 plan, consumers who switched plans saved an average of $42 per month in premium costs, equivalent to over $500 in annual savings.

...actually made me roll my eyes a bit, as I explained back in March:

This last data point is a bit silly to make hay of in my opinion. Part of the reason so many people "changed issuers", of course, is because a dozen Co-Ops melted down and were no longer on the exchanges, meaning that a good 800,000 people (or 10.2% of all 7.8 million renewing) HAD to switch issuers, assuming every one of them stayed on the exchange (not all did, of course).

In other words, about a quarter of those who "chose to" switch plans weren't kind of had that "choice" forced upon them. Don't get me wrong, many of them may have ended up with better/just as good deals in the end after all, but it's a bit disingenuous to say they "chose" to do so. This will be even more the case this fall, since the number who will have to switch plans/carriers will be even higher (up to 2 million or so, or about 18% of all current enrollees).

Having said that, I strongly suspect that plugging in the missing states (California, New York, Colorado, etc) probably wouldn't change the overall point much one way or another...nor would adjusting their calculations to reflect the lower number of currently effectuated enrollees. The adjusted percentage who can find an exchange plan for under $100/mo will probably still be pretty close to 78%.