More than 2.8 million people—about 15 percent of the State’s population—were enrolled in plans through the NY State of Health as of the end of the 2016 open enrollment period on January 31, 2016. That represents a net increase of nearly 700,000 since the second open enrollment period when 2.1 million people enrolled. New York has seen a significant, corresponding reduction in the number of uninsured. Since the Marketplace opened in 2013, the number of uninsured New Yorkers has declined by nearly 850,000. The rate of uninsured declined from 10 percent to 5 percent between 2013 and September 2015, according to data recently released by the Centers for Disease Control and Prevention.

That 2.8 million figure includes exchange QHPs, Basic Health Plan enrollees (BHP, or Essential Plan as NYSOH calls it), and Medicaid expansion (along with NY's unique "Child Health Plus" program, which is not to be confused with CHIP):

The BHP (Basic Health Plan) was just introduced in New York this year via the ACA (Minnesota already had their own BHP system prior to the ACA, though it has since been pretty much converted over to the ACA version). It's important to remember that there are two populations which can enroll in the BHP:

According to NYSOH, 98% of those who qualify for the BHP sign up for it, which makes sense. It's a great program at $20/month.

As for the actual "official" exchange QHPs, only 54% of the 272K who selected these are eligible for APTC assistance, far lower than the 83% national average...due to a large chunk of lower-income QHP enrollees being cannibalized by the BHP program, of course.

Through January 31, 2016, 1,966,920 individuals enrolled in Medicaid through NY State of Health. This includes 1,743,805 enrollees who renewed 2015 coverage and 223,115 enrollees who are new to the Marketplace during the 2016 Open Enrollment Period. A lower share of Marketplace Medicaid enrollees are new to the Marketplace (11 percent) compared with QHP and EP enrollees. Through the Affordable Care Act, New York expanded Medicaid eligibility levels to 138 percent of FPL to all eligible adults. Since New York’s eligibility levels already largely met this new federal standard prior to the Affordable Care Act, this expansion affects single and childless adults whose eligibility had previously been set at less than or equal to 100 percent of FPL. Approximately nine percent of Medicaid enrollees are part of the expansion population, consistent with 2015.

I think that's 9% of the total Medicaid enrollment in NY, which would be roughly 576,000 people; the rest would presumably already be eligible for Medicaid in New York regardless of the ACA.

As noted above, CHP is unique to New York and shouldn't be confused with the Children's Health Insurance Program, or CHIP, which every state has (the 8.4 million which Hillary Clinton keeps campaigning on). Around 600,000 NY children are enrolled in CHIP in addition to the 215K enrolled in CHP, although I think those 600K are already included in the 6.4 million Medicaid figure above.

In terms of how many exchange enrollees are newly insured/covered thanks to the ACA:

At the end of the 2016 open enrollment period, ninety-two percent (92 percent) of those who enrolled through the Marketplace reported that they did not have health insurance at the time they applied.

This sounds astonishing, until you remember that it includes the Medicaid, CHP and BHP enrollees, who are obviously far more likely to be previously uninsured. When you look strictly at QHP enrollees, it drops to 57%, which is still very good...except that even then, that's based only on the 54% who are receiving APTC assistance. This figure probably drops considerably if you were to include those paying full price (over 400% FPL income). Still not bad.

There's another too-good-to-be-true statistic here as well: "61% of marketplace enrollees are 34 or younger!!" Woo-hoo, the risk pool problem is solved!

There's a whole bunch of ethnic and geographic data in the report; check it out if you're interested.

Oh, for corporate/market share geeks, there's a breakout of the QHP enrollment by insurance carrier: 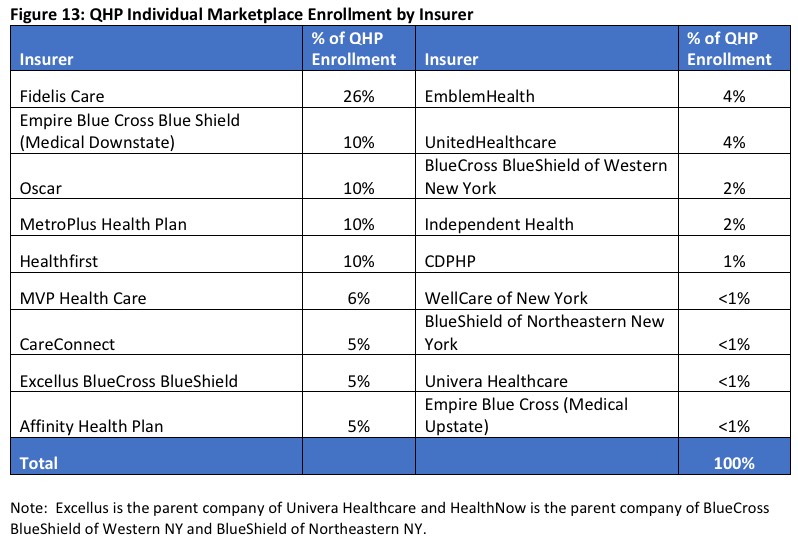 They also include a table showing how the market share of each carrier has shifted around from year to year, which is handy: 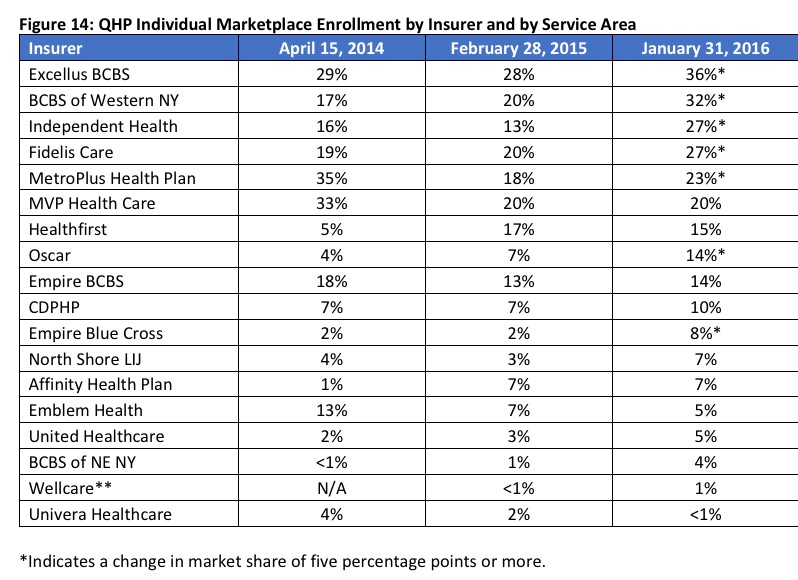 They also have a Metal Level graph which does a nice job of separating out Silver plans by CSR and non-CSR enrollment: 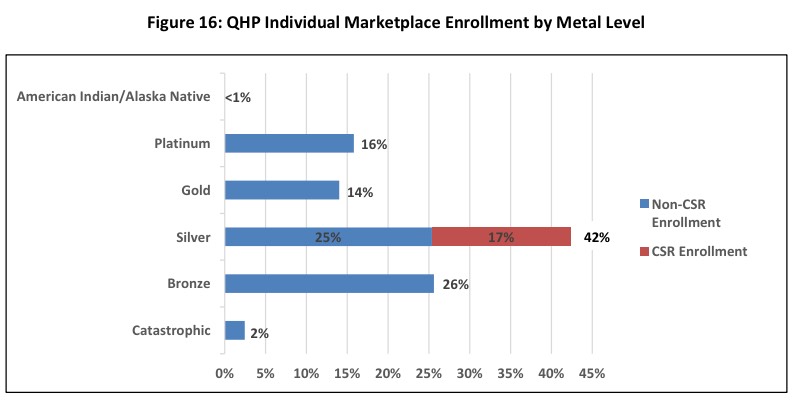 For fans of standardizing the exchange QHPs (including myself and Richard Mayhew), this should be of note:

Standard plans are a hit. Personally, I'd recommend pushing these as hard as possible (and potentially even making them mandatory).

New York has 13,224 individuals enrolled in exchange-based SHOP plans this year. I don't see hard SHOP enrollment numbers very often, so this is handy info to have.

Anyway, there's a whole mess of other info included in the report; check it out!