New Hampshire has only 5 carriers offering individual market policies, all 5 of which will still be participating in the NH market next year as well. Two of the five (Community Health Options and Minuteman Health) are among the 7 surviving ACA-created Co-Ops.

Even so, NH is proving to be a very tricky state to estimate, because only one of the 5 carrier rate filings includes their actual current rate-impacted enrollment data. As a result, I've had to take my best shot at estimating the market share of the other four. The only way I could think of to do this was to look up the latest NH DOI 2016 QHP Monthly Membership Report. New Hampshire, to their credit, is one of the only states without their own state-based ACA exchange which still actually posts regular reports about how many residents are enrolled in ACA exchange policies. Furthermore, they even break these numbers out by metal level and carrier, making the relative market share easy to calculate.

There are, however, a few caveats here: First, these reports don't include off-exchange enrollment, which could account for a substantial portion of the total for each carrier. Second, just because a certain number of people are enrolled in a carrier's exchange QHPs, that doesn't guarantee that all of that carrier's policies will be renewed. For instance, Harvard Pilgrim specifically states that "only 44% of renewing members" are in the plans included in the filing, or 9,461 people. Sure enough, when you tally up the numbers in the monthly report, there were a total of 19,326 people enrolled in Harvard Pilgrim QHPs as of July.

Finally, there's a third twist: Like Arkansas, New Hampshire's ACA Medicaid expansion program was converted into a "Private Option" program (Premium Assistance Program, or PAP). These are essentially the same QHPs that non-Medicaid recipients are enrolled in, but the premiums are paid for using Medicaid money. I think they're included in the same risk pool as the "normal" QHPs, but I'm not 100% certain about this. As you can see below, this makes a massive difference, since the two carriers requesting the lowest rate hikes (Ambetter/Celtic and Anthem/Matthew Thornton) also happen to have the largest percentage of PAP enrollees. Including or not including PAP numbers makes the difference between a 13.1% weighted average and 31.4%.

Finally, for Minuteman Health, the average request was also questionable, since there are 6 different filings ranging from 25-60%. Without knowing the breakdown between the 6, I had to run a simple average to get 30.7%. 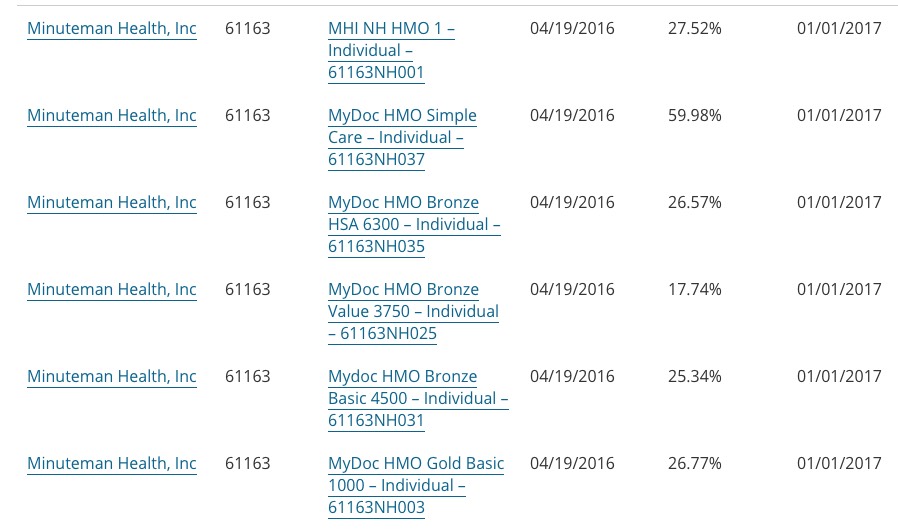