This is actually the second time this has happened. The first was over a year ago, when CATO Institute ACA Attack Dog Michael Cannon used my work to testify before a U.S. Senate committee how many millions of people would be screwed over by a plaintiff win in King v. Burwell. This was kind of interesting, considering that he was using that fact to support a plaintiff win in King v. Burwell; from his perspective, over 6 million people losing their APTC assistance would have actually been a positive thing. Conservatives are strange like that. Thankfully, the Supreme Court ruled against the plaintiffs, which made the whole thing moot, but whatever.

In any event, today it's happening again; thanks to twitter user "sthfrk2008" for the heads up:

If you look on page 3 at the bottom, there's a little bar graph showing the average requested 2017 rate hikes on the individual market for 3 dozen states...taken directly from this site, as shown in the footnotes. 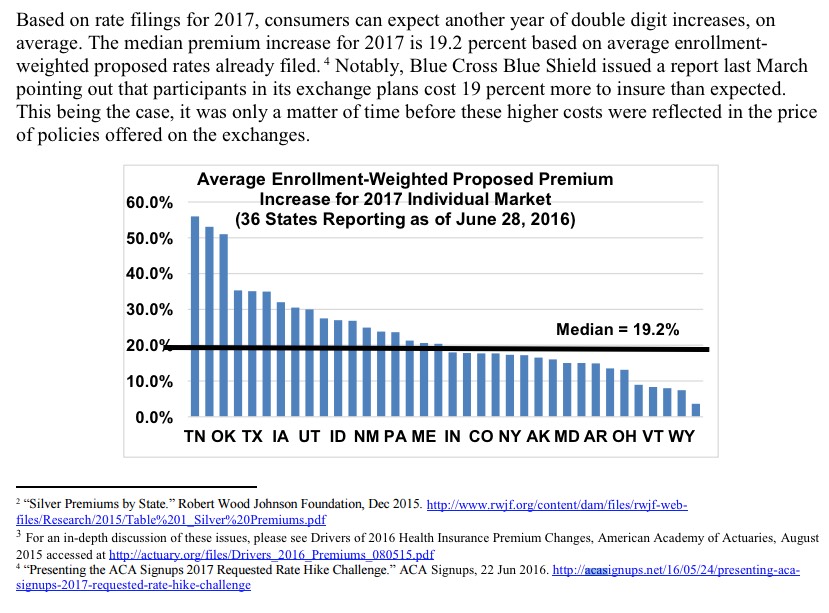 The chart is actually pretty accurate from what I can tell...except that they only included half of the state abbreviations, which seems rather odd to me. Whatever.

And who is the "Council for Affordable Health Coverage", you ask? Well, according to Wikipedia:

The Council for Affordable Health Coverage (CAHC) is a coalition of pro-corporate organizations, trade associations, front groups, and insurance companies that actively oppose legislation such as the Affordable Care Act, specifically the ACA's employer mandate.[1][2] (The ACA's employer mandate provision requires that companies provide 70 percent of their full-time employees health coverage if they employ the hourly equivalent of 100 full-time workers.)[3]

So there you have it, folks: The next time someone accuses me of posting nothing but rah-rah pro-ACA propaganda, feel free to show them this.