As they do every three months, Gallup has released their quarterly survey results regarding the number of uninsured American adults.

As I do every three months, I'm reformatting their data in a more relevant format, since Gallup seems to be determined not to show the full Y-axis on their graphs (see bottom of entry for original). In addition, I've added some other key data points: Q1 2010 (when the ACA was actually signed into law) and Q3 2013 (when the ACA exchanges and Medicaid Expansion programs launched). Finally, I've added 3 color-coded sections, showing three major categories of the uninsured: Adults who are already eligible for Medicaid but haven't actually enrolled in the program yet; undocumented immigrants who aren't eligible for any taxpayer-funded coverage (or even for full-price exchange-based policies); and the 2.8 million people still caught in the "Medicaid Gap" across 19 states which haven't expanded the program yet. Note that the Medicaid Gap has shrunk from around 5 million in 2014 as a half-dozen or so states have come around; the other two groups may have gone up or down since 2014.

The other major fact to remember with Gallup's surveys is that they ONLY include ADULTS, not children. If you include kids under 18 (around 25% of the total population), all of the percentages below drop by a few points because the uninsured rate has always been considerably lower among children than adults. That's why the more comprehensive National Health Interview Survey put the uninsured rate for the total population down at 9% last fall. 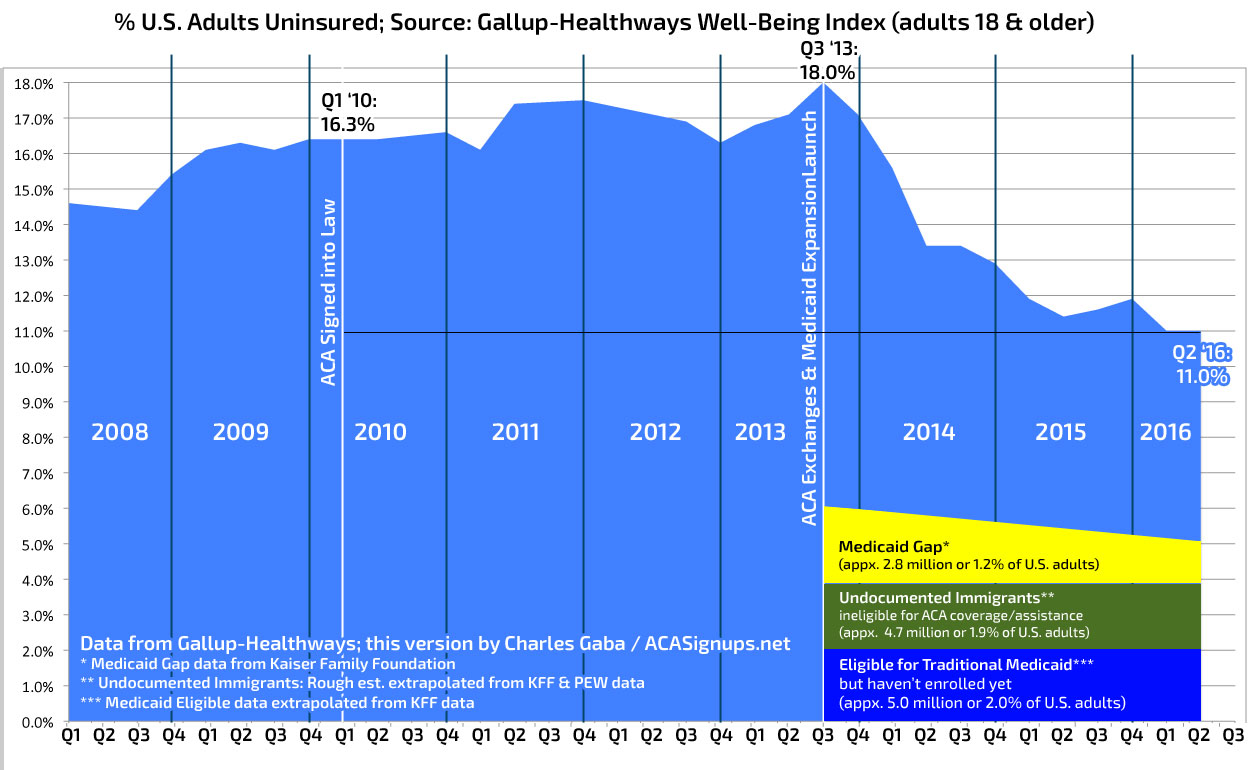 Lots of other interesting demographic data in Gallup's survey, but here's the ones which stand out the most to me:

Obviously some of this is simply because those with higher incomes were already far more likely to be insured prior to the ACA anyway, but it's still a reminder of the remaining challenge--the 3 color-coded sections above all apply almost exclusively to the poor (I'm assuming that most uninsured undocumented immigrants are very low income; I could be wrong, I suppose), but the other 5.9% or so includes millions who are either eligible for APTC assistance (138% - 400% FPL) or earn a high enough income that they don't qualify.

To assess changes in the type of insurance coverage people have, Gallup and Healthways focus on adults aged 18 to 64, because nearly all Americans aged 65 and older have Medicare. Since the fourth quarter of 2013, the percentage reporting they have a plan fully paid for by themselves or a family member has changed the most. In the final quarter of 2013, 17.6% of all U.S. adults were insured through these individually purchased health insurance plans, compared with 21.8% in the second quarter of 2016, a 4.2-point increase.

Adults age 18-64 make up about 200 million people in the U.S. 21.8% of that would be 43.6 million people...which is more than double the estimates of the Individual Market size by every source I know (around 20-22 million, give or take). It sounds to me like Gallup's wording of the question is tripping people up...

"Is your health insurance coverage through a current or former employer, a union, Medicare, Medicaid, military or veteran's coverage, or a plan fully paid for by you or a family member? Primary and secondary insurance combined"

...but this may be accounted for when you include the "secondary" insurance, as Gallup addresses: 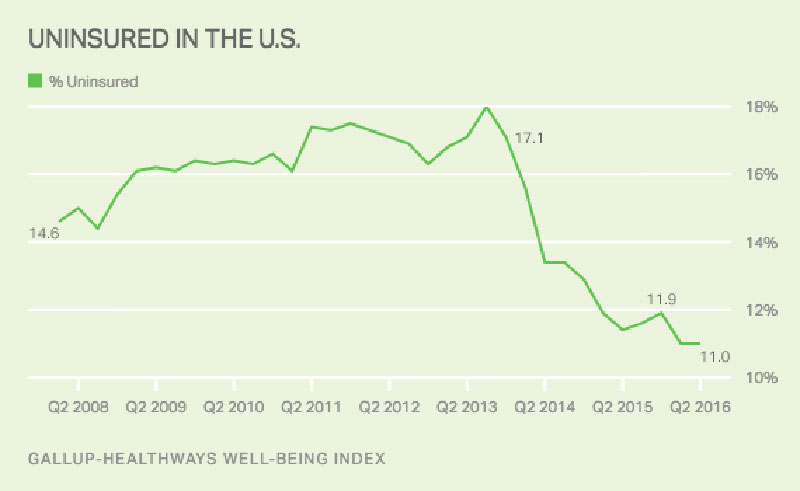