There are only 2 things I'm certain of when it comes to the requested rate hike filings in Arizona's individual market:

The data below is drawn from two sources: The RateReview.HealthCare.Gov database and Arizona's Health Filing Access Interface (HFAI) SERFF database.

As you can see, there's some confusing and contradictory numbers, but I'll try to muddle through each: 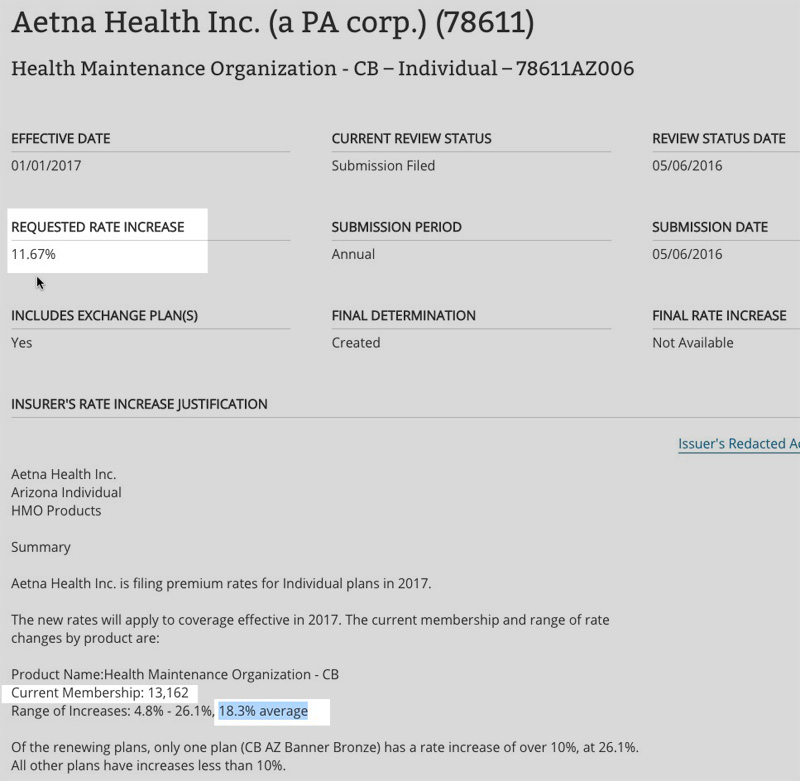 BLUE CROSS: Blue Cross Blue Shield of Arizona has 3 separate listings for three different product lines; the average rate hikes requested are (gulp) 74.41%, 30.26% and 64.29% respectively...for a blended average of 64.9%, which will obviously be shockingly high if approved. I believe this is also the single highest carrier-specific rate hike request I've seen so far:

HOWEVER, the enrollment number is listed as 81,261 policyholders. Given the mistake I made last night with Colorado, I made sure to double-check the HFAI database to see what the number of covered lives is, and came up with a headscratcher: 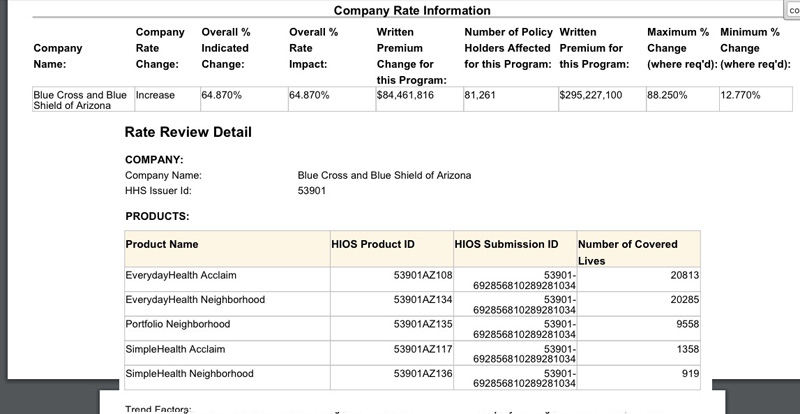 How can there be 28,000 fewer covered lives than policyholders? I haven't a clue. For the moment I'm using the 81K figure.

CIGNA: Cigna has listings under 2 names: "Cigna Healthcare of AZ" which includes their HMO plans only (and which is pretty straightforward...8.7% for 4,559 enrollees)...and "Cigna Health & Life Insurance" which is only requesting an increase of 6.76%...but which doesn't list their current membership anywhere. HOWEVER, their (redacted) filing memo does stated that "CHLIC" is only offering a single Bronze plan next year anyway, which means that there are likely a pretty small number of current enrollees who would be eligible to renew their current policies anyway. I'm sure the number is greater than zero, but without knowing what it is, I have to leave that field blank...which is a shame, since it's the lowest rate hike request in the state, and given how eye-popping some of the other numbers are, anything to lower the weighted average would be much appreciated. Ah, well...

As I keep noting, these three are all the same parent company​, and once again, they're all requesting exactly 17.37% increases on virtually nonexistent membership (exactly 2 people across all 3 divisions). Still no clue what's going on with "Freedom Life" but it's a non-factor here:

HEALTH CHOICE: Again, the RateReview.HealthCare.Gov site claims a 25.71% average, but the filing itself lists it as 28.1%. Not a huge difference, but odd:

HEALTH NET: The HC.gov site doesn't give any indication of the membership, but the HFAI filing does: 20,515 people, with a 29.1% average request.

Obviously there are a LOT of weird variables and questionable numbers across some of the above filings, so take all of this with a huge grain of salt...but as best as I can figure, given the limited and conflicting data I have on hand, carriers in the Arizona individual market are asking for an average of 53% rate hikes for 2017: