Hmmm...last year Nebraska had 5 carriers offering individual policies, 2 of which were actually divisions of the same company (UnitedHealthcare). Since United is pulling out of Nebraska, this leaves only three companies...one of which is the mysterious "Freedom Life Insurance Co." which keeps popping up in numerous states as not having a single actual enrollee, and almost always asking for the exact same rate hike: 17.37%. What's up with that?

Anyway, Coventry (actually Aetna) appears to also be gone next year as well...or perhaps they simply haven't submitted their rate filings yet? I suspect the latter because Nebraska's total individual market was over 110,000 people as of 2014, and is likely up to over 130K this year (nearly 88,000 enrolled via the ACA exchange alone this year)...yet adding up the numbers from the official filings only totals around 30,000 people.

I suppose the other 100K or so might be found in United and/or Coventry (the latter of which enrolled nearly 33K last year), but until I know for sure, it looks like an ugly 35% average requested rate hike for the Cornhusker State:

On a more amusing note, judging by the overly-defensive wording on the Nebraska Dept. of Insurance website, I'd say they're getting a lot of complaints from residents about these PROPOSED rate  hikes... 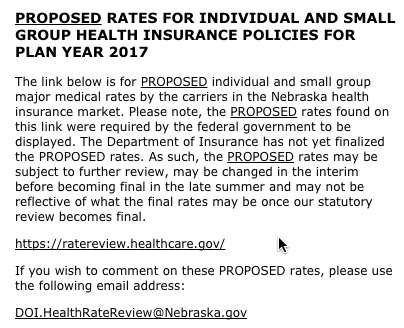 Just so we're all on the same page: These are PROPOSED changes, not approved... :)