Add all of these up, and here's what a partial, very early portion of the Virginia individual market looks like. I can't stress enough that this is very incomplete and that any or all of these numbers are subject to change (possibly more than once) between now and November 1st: 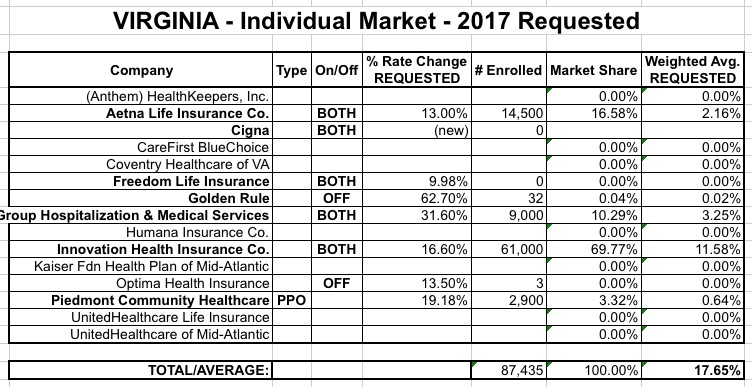 Just to give you an idea of how incomplete this table is right now, note that all 8 carriers combined only add up to around 87,000 people. By comparison, Virginia enrolled over 420,000 people on ACA exchange policies alone this year, and when you add their OFF-exchange individual enrollment the total is likely 600,000 or more.

That means that the table above likely only represents around 15 - 20% of Virginia's total individual market.

How much of a difference can this make? Well, let's suppose that this is 20% of the total, and the other 80% averages a 10% increase. That would make the overall weighted average hike around 11.5%. If the remaining 4/5ths average a 20% hike, the state-wide weighted average would be roughly 19.5%.

My point here is that NO, people should not start reposting the table above claiming that it automatically means Virginia residents are looking at 17.6% rate hikes. Just like early election results can change dramatically as more data comes in, the weighted average listed above will likely jump around a lot as the remaining carriers chime in...and then again when the approved rates are released.

UPDATE: Thanks to Zachery Tracer for pointing out that I was missing some of the filings; it turns out that 13 companies have submitted filings after all!

Some of the numbers above have been altered thanks to the corrected filings; I'll go through and update them as necessary, but in the meantime, here's the fuller picture: 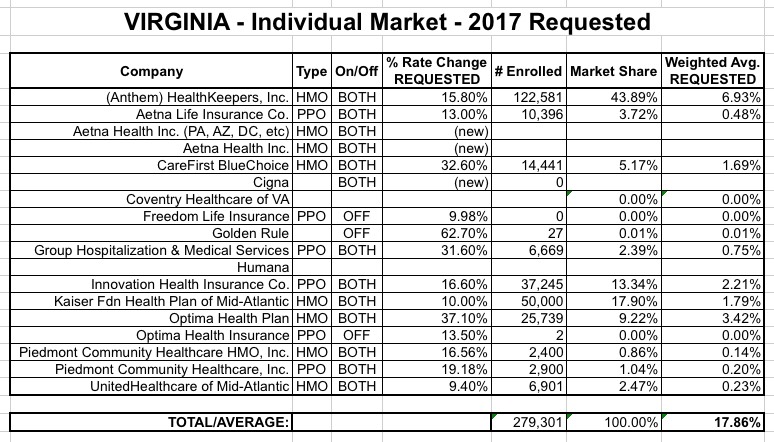 As you can see, even with the additional filings plugged in, this is still a very incomplete picture. It's up to 279,000 currently covered lives, which should only represent about 46% of the total individual market in Virginia.

So, where are the other 300,000 or so people? Well, some might be enrolled in companies such as Coventry and Humana, which may be dropping out of the Virginia individual market entirely...or might just not have submitted their filings yet?

It's more likely, however, that many of them are enrolled in Aetna Health plans. As you can see, Aetna has 10,396 people in PPO plans, but their HMO filings appear to be all brand-new policies:

Unlike Freedom Life, which lists zero people enrolled, Aetna Health's filing is completely blank, so I'm not sure what to make of that. It's certainly possible that Aetna's HMO market share makes up over 50% of the total statewide market, but without that missing info I'm not sure how useful all this work was...

In any event, even with nearly half the picture filled in, it's hard to know what to make of this. On the surface it looks like roughly a 17.8% average hike request, but with over half the data missing it's hard to say:

For the moment, one important tidbit is that it looks like UnitedHealthcare IS gonna stick with the ACA exchange in at least one state next year.

UPDATE x2: Hmmm...I just got off the phone with the Virginia Dept. of Insurance. According to them, April 11th was the filing deadline for 2017, which means that unless there's some special circumstance which develops, the carriers listed above are it. Assuming I'm understanding correctly (and I might still be missing something here), this means that:

This would also explain why "Aetna Health Inc." is claiming to only be offering "new" products and therefore has "zero" current HMO enrollees; they do have a bunch of enrollees, but they're technically under the Coventry name, not "Aetna Health".

If anyone can correct/clairify any of this, please let me know, but I think that's everything.

UPDATE x3: OK, sorry about the confusion, but as you can see from the updated version of this entry (thanks to FarmbellPSU for the tip!), I finally have it straightened out: 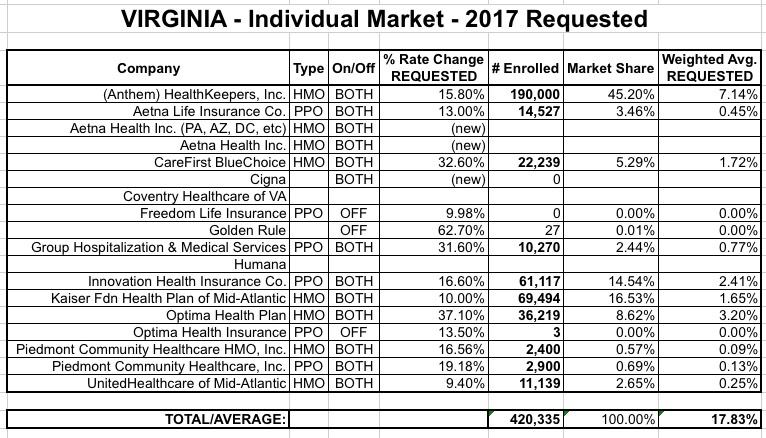 As you can see, the weighted average request is still around 17.8% even with the corrected enrollment numbers, as the relative market share stayed about the seame.

This does, however, cover a much higher portion of Virginia's total individual market; as far as I can tell, there's perhaps 100K-200K still "missing", most likely to be found in the Humana and/or Coventry fields. Here's how those would play out, assuing 150K: