Thanks to Richard Simpkins for bringing this to my attention.

A week or so ago, Akash Chougule, Director of Policy at Americans for Prosperity (you know, the Tea Party political outfit funded by the Koch Brothers), posted an Op-Ed piece at Forbes tearing apart Ohio Governor John Kasich's decision to expand Medicaid via the Affordable Care Act. From a Republican POV, of course, Kasich agreeing to accept ACA Medicaid expansion is blasphemous. The piece was posted just ahead of the Ohio Republican Presidential primary, so naturally it was intended to hurt his chances of winning his home state (it didn't work, of course; Kasich did indeed win Ohio, keeping his campaign alive awhile longer, if just barely).

Anyway, here's the part which made both Simpkins and myself scratch our heads:

Ohio Governor John Kasich has spent no small amount of time on the presidential campaign trail discussing his decision to expand Medicaid to 650,000 able-bodied adults under Obamacare. But policymakers in non-expansion states should take a closer look at what’s actually unfolded in Ohio before considering going down the same path.

Kasich’s Obamacare expansion has enrolled more able-bodied adults than the state thought would ever sign up. This enrollment explosion has resulted in $2.7 billion of budget overruns in just the first two years of the program. The overruns have left lawmakers scrambling, as the state’s share of costs come due in the current biennium budget. Overruns also mean less funding for important budget priorities like public safety, education and the truly needy.

...Although Kasich has urged other states to follow his lead, his unilateral expansion should instead serve as a warning sign to other states. When he first proposed expanding Medicaid under Obamacare, the Kasich administration predicted just 365,000 able-bodied adults would sign up in the first year, with that population growing to 447,000 by 2020.

But within seven months, the program had already exceeded its first-year projections. Altogether, more than 650,000 able-bodied adults have been added to Kasich’s unilateral Medicaid expansion. That skyrocketing enrollment has led to major budget overruns for Ohio.

With enrollment already exceeding maximum projections, these overruns are certain to continue for years to come. In fact, based on the most recent information, the Foundation for Government Accountability estimates that Kasich’s Medicaid expansion is on schedule to run nearly $8 billion over budget by the end of 2017.

I have no problem with the article's first claim--that Ohio has enrolled far more people in their ACA Medicaid expansion program than expected. This is similar to what's happened in many other states, including my own state of Michigan, where around 600,000 people had enrolled as of last spring when most projections expected no more than 500,000 at most (and that it would take several years to ramp up to that level). 650,000 people enrolling in Ohio's program when they expected several hundred thousand fewer than that is actually pretty much what I'd expect at this point.

No, the problem here is with the cost figures listed. Here are the key claims:

According to the Kaiser Family Foundation, traditional Ohio Medicaid enrollees cost an average of around $6,855 apiece per year. This varies widely depending on the type of enrollee (disabled, children, the elderly, etc), but those enrolling via ACA expansion should be, for the most part, able-bodied adults, who cost considerably less on average. Still, let's give the Forbes article the benefit of the doubt and assume $6,800 each.

In September 2013 (just prior to ACA expansion starting), Ohio had appx. 2.34 million residents enrolled in traditional Medicaid. If my math is correct, that means the total Medicaid expenses for Ohio was around $15.9 billion for the non-expansion population.

Since then, Ohio's total Medicaid population has indeed increased by a net total of appx. 590,000. This is 60K lower than the 650K figure cited in the Forbes piece (which in turn got most of it's data from a Hot Air article by Jason Hart), presumably due to baseline churn--that is, people are constantly moving onto and off of Medicaid from month to month. Still, I'm willing to use the higher 650K figure. Assuming a similar $6,800 per person, that would be an additional $4.42 billion per year.

Here's the problem with all of this, however: The Federal government pays about 62% of the cost of "traditional" Medicaid, or roughly $4,200, leaving around $2,600/person for the state to cover...and, more to the point, 100% of the cost of ACA EXPANDED Medicaid is covered by the federal government, not the state. In other words, the cost to the state of Ohio for those 650,000 people should be exactly $0 through the end of 2016, not $6.8 billion or even $3.9 billion.

It's true that starting in 2017, Ohio taxpayers will indeed have to start picking up a small percentage of the tab (5%, going up gradually to 10% over the course of a few years), but that's it. Even if the total swells further to, say, 800,000 or so, the state would still only be paying perhaps $500 million per year, with the feds picking up the other 90%.

The only way that either the Forbes or Hot Air articles make any sense is if they're talking about the total cost to "the taxpayers" in general, since "federal funding" obviously comes from federal tax revenue. Perhaps that's what they're referring to...but both articles sure as hell make it sound as though this money is part of the state budget.

Here's the thing, though: As Ezra Klein pointed out a year ago (in an article which was mainly focused on the then-upcoming King v. Burwell Supreme Court Case), those federal taxes would be being paid by Ohio residents REGARDLESS of whether the state expanded Medicaid or not:

If [the King v. Burwell plaintiffs are] successful, then it will be possible for a state that opposes to Obamacare to withdraw from both the Medicaid expansion and the exchange subsidies — that is to say, from pretty much all of Obamacare's benefits. But they will still pay all of its costs. They will still pay the law's taxes and their residents will still feel the law's Medicare cuts. Obamacare will become a pure subsidy from the states that hate the law most to the states that have embraced it. It's like a fiscal version of reverse psychology.

Most states won't want to rip themselves off that badly, at least not for long. And all a state would need to do to receive full benefits under the law is say yes to some form of the Medicaid expansion and build their own exchange. But Obamacare is powerfully politicized, and some Republican governors or legislatures might hate the law enough to hold their state back.

Yup, the ACA includes a variety of funding mechanisms on both the "spending cut" side (the infamous $740 billion in 'Medicare cuts', although that's really just cuts in excessive payment rates to providers, not actual services) as well as the revenue side (ie, a 3.8% investment income tax on those earning over $200K/year). Those cuts and taxes would hold for various Ohio residents even if the state hadn't expanded their Medicaid program...just as they are in states like Texas and Florida which have refused to do so to date.

In other words, if Ohio hadn't expanded Medicaid, they wouldn't have saved a dime until at least next year...and even then, the additional cost to the state per year would have been a fraction of what Mr. Chougule and Mr. Hart are claiming...and that's before taking into account the cost savings to hospitals via reductions in uncompensated care and so forth.

Of course, it's also possible that a chunk of the 590,000 net increase in Medicaid enrollees are simply due to the "woodworker effect", in which people who were already previously eligible for non-expansion Medicaid go ahead and enroll in the program. In case anyone is wondering whether I made up this term, not at all; it's repeatedly referred to in this Mercer study from February 2013 which attempts to project costs of the ACA expansion program for Ohio under difference scenarios:

As with previous cost projections, this report includes the woodwork effect, which reflects the impact of an increase in Medicaid enrollment and cost because of the ACA publicity and individuals’ heightened awareness of coverage requirements/opportunities. Many currently eligible but not enrolled Ohioans may apply for coverage on or before January 2014.

Even if Ohio were not to expand its Medicaid program to cover groups that are not currently eligible, the woodwork effect could occur because of coverage requirements and program publicity. Because of the ACA’s mandate, individuals will seek health insurance to avoid penalties/taxes. The health insurance exchange will refer applicants to Medicaid programs based on income levels. If employers drop health insurance coverage, more people will seek coverage from the exchange and be eligible for partial or full government-subsidized coverage. This effect is sometimes referred to as “crowd out” and is considered in our woodwork effect projections. We have projected the impact of this woodwork effect enrollment to begin on July 1, 2013, initially ramping up through December 2013, and continuing throughout the projected SFYs.

The Mercer study even breaks out estimates of how much they feel the "woodwork effect" would have on the state budget...and as you can see, while they figured the total cost would be around $9.8 billion from 2014 - 2020, the state share of that would only amount to around $3.3 billion...over 7 years: 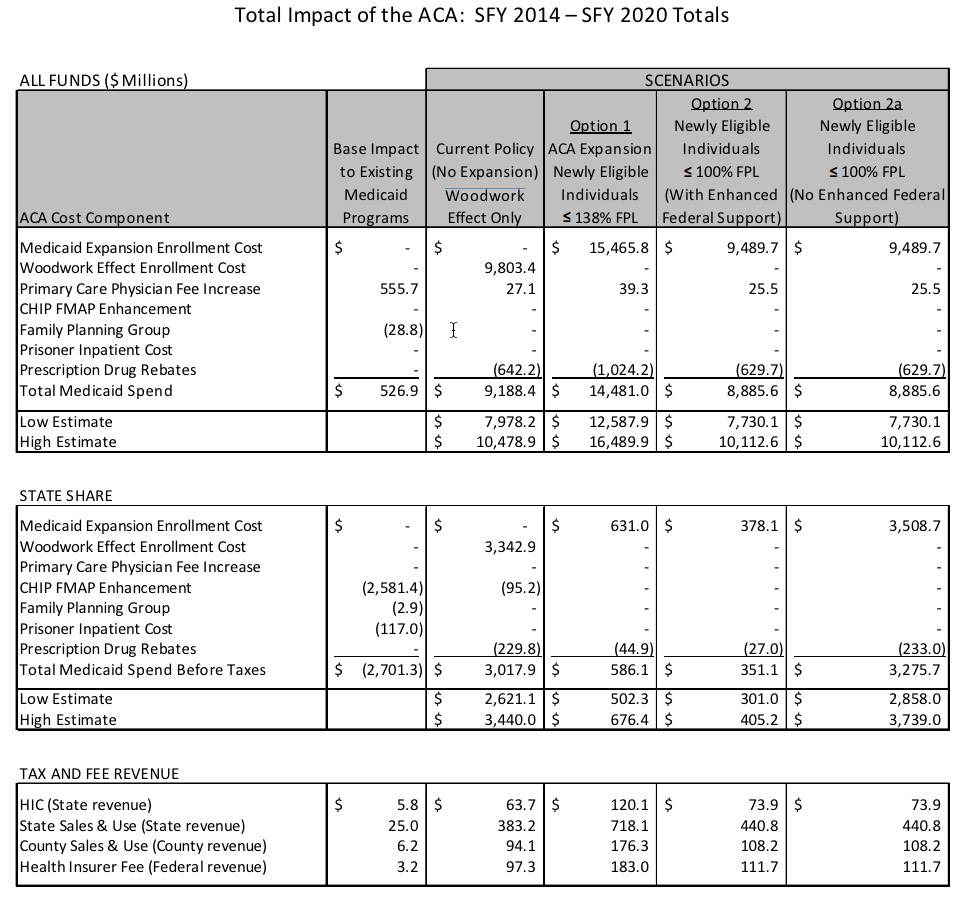 In other words, the woodworker effect was only projected to cost the state around an extra $480 million per year.

It's possible that the actual cost is higher (say $600 million/year?), but you can hardly blame the Affordable Care Act for encouraging people to enroll in a program for which they were ALREADY ELIGIBLE.

There's nothing complicated here: If 1,000,000 people are legally eligible for some public assistance program, you should probably set your budget on the assumption that 1,000,000 people will, you know, sign up for it. The whole point of these programs is supposed to be to help as many people as are legally eligible, not to discourage people from signing up for them (or hope that they won't).

In short, a higher "woodwork" effect" is a good thing, because it means that people are more aware of their rights and are taking advantage of them.

This, of course, is the same massive philosophical gap between the Democratic and Republican Parties which can be seen in areas like voting rights: The Democratic Party pushes for policies which encourage as many eligible adults as possible to both register and vote, while the Republican Party does everything in it's power to discourage or depress both registration and turnout.

UPDATE: Pradheep Shanker, Joseph Snable, Jonatham Ingrham and the author of the original Hot Air article (Jason Hart) have all chimed in to point out that it's actually not the case that the ACA expansion revenue collected from Ohio residents is shifted to other states to cover their Medicaid expansion; instead, the funds collected from any state which hasn't expanded the program is simply used to pay down the federal deficit.

I agree that this can be seen as a net positive use of it as well (better than having the money just sit there gathering dust in some abandoned account), but that still doesn't change the fact that the revenues are still collected by the federal government regardless of what happens to it afterwards, right?

In other words, those living in non-expansion states such as Florida, Texas, etc. who earn over $200,000/year and have investment income still have to pay the 3.8% tax, regardless of what happens to that money, correct?

If I'm wrong about this, and states only have to pay these fees/taxes if they've expanded the program, then I'll admit that this entire blog entry is flat-out wrong. If, however, those taxes/etc are still in place either way, then my point stands: Refusing to expand Medicaid makes no difference to how much money those folks have to pay in taxes under the ACA.

It does obviously make a difference in how much the federal government spends, and therefore the amount of the deficit and debt, but that's an entirely different discussion.