Covered California held a press call a few minutes ago in which they released detailed enrollment numbers for the 2016 Open Enrollment Period, broken down a number of different ways, including by rate region and individual carrier market share. They even broke the individual numbers out between renewals and new enrollees.

Unfortunately, I only caught half the call, but the full press release should be coming out momentarily which is supposed to have all of the numbers broken out every which way.

Until then, here are some oddball key points from the call:

The "semi-confirmed" QHP total for CoveredCA until now was around 1.575 million, so this should bring that up to 1.59 million.

(OK, never mind...as you can see in the actual data release below, it looks like the renewal number was about 18K lower than I thought, so the grand total is right around 1.572 million anyway).

More to come, hopefully in a few minutes when the press release shows up...

SACRAMENTO, Calif. — Covered California released new enrollment data on Tuesday, which showed how the state’s healthy mix of enrollees and its aggressive negotiations with health insurance companies led to increased competition in the marketplace and better prices for consumers.

More than 439,000 consumers newly signed up for health care coverage during the most recent open-enrollment period — including approximately 14,000 who received help finishing their applications after the Jan. 31 deadline. Of those new enrollees, the percentage of consumers who selected a health plan outside of the four major carriers — Anthem Blue Cross of California, Blue Shield of California, Health Net and Kaiser Permanente — nearly tripled compared with a year ago.

“Covered California built a marketplace that is leading to sustainable cost trends because of the good risk mix, and that creates a level playing field for carriers, forcing them to compete on price and quality,” Covered California Executive Director Peter V. Lee said. “Competition is driving the market. Consumers are shopping around and selecting the health plan that best fits their needs and pocketbook.”

Another important finding was that the vast majority of renewing consumers seemed satisfied with the price, quality and level of coverage — with about 88 percent keeping their current plan.

“Price matters, and just like any other business, consumers want the best value possible,” said Covered California Director of Health Plan Management Anne Price. “We have created a marketplace where carriers are fighting for people’s business. With more than 1 million enrollees, our customers are flexing their consumer muscles. They are also part of keeping costs low by being part of a large and healthy risk pool.”

She added: “Compared to much of the nation, where many consumers changed plans when they renewed, our success at keeping prices low allowed consumers to have a win-win — many got to keep their existing plan while getting a good deal.”

For example, several carriers experienced a growth in enrollment after aggressively pricing their products and attracting new consumers from other plans.

Other highlights of the data:

“This is further proof that the Affordable Care Act is working and that Covered California is working hard to use all the tools to benefit consumers,” Lee said. “We have created a marketplace where there is a good mix of consumers enrolled, which keeps prices down and carriers fighting for people’s business.”

Lee noted that Covered California seeks to put the consumers in the driver’s seat, by making sure that the health insurance companies that participate in the exchange offer true value, and then the exchange negotiates the rates, networks and quality elements to get the best value for consumers. Covered California also created a standard benefit design, which establishes the services that plans must offer and allows consumers to make an apples-to-apples comparison between plans. Before the Patient Protection and Affordable Care Act, it was very difficult to compare plans because they could each have different deductibles, copays, maximum out-of-pocket costs and other benefits.

“When the Affordable Care Act was signed into law six years ago, we all imagined that we would create a competitive marketplace to help consumers comparison-shop and make choices based on price and value,” Lee said. “Now we can see that dream is beginning to become a reality.”

Consumers can reach a Service Center representative by calling (800) 300-1506. The nearest Certified Insurance Agent, Certified Enrollment Counselor or Certified Plan-Based Enroller can be found by visiting www.CoveredCA.com/get-help/local and searching for enrollment help by ZIP code. 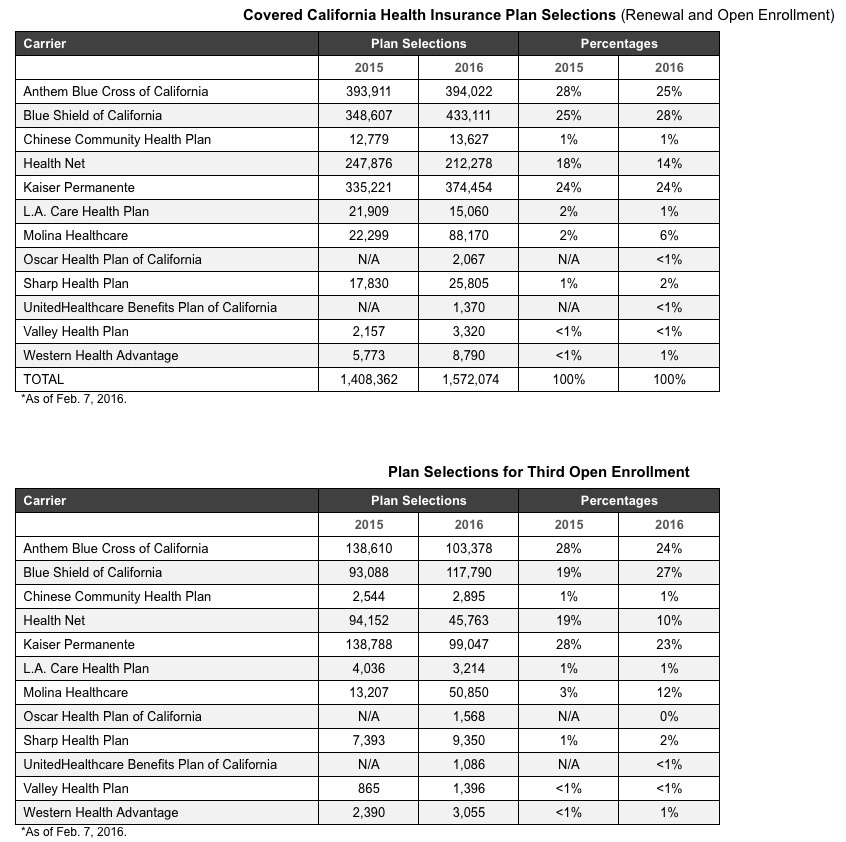 While the percentage of overall enrollment in the four largest health insurance companies has decreased from nearly 95 percent down to 90 percent in two years, plan selections at the local level are growing as a result.

“The open enrollment data released today reminds us of the critical importance of local health plans,” Lee said. “Our consumers know these plans in their communities, and it shows how the Affordable Care Act doesn’t just work for the major players, but for the local health plans as well.”

UPDATE: I've also downloaded and reformatted the regional breakout to be more readable on a single page (click for full-size version): 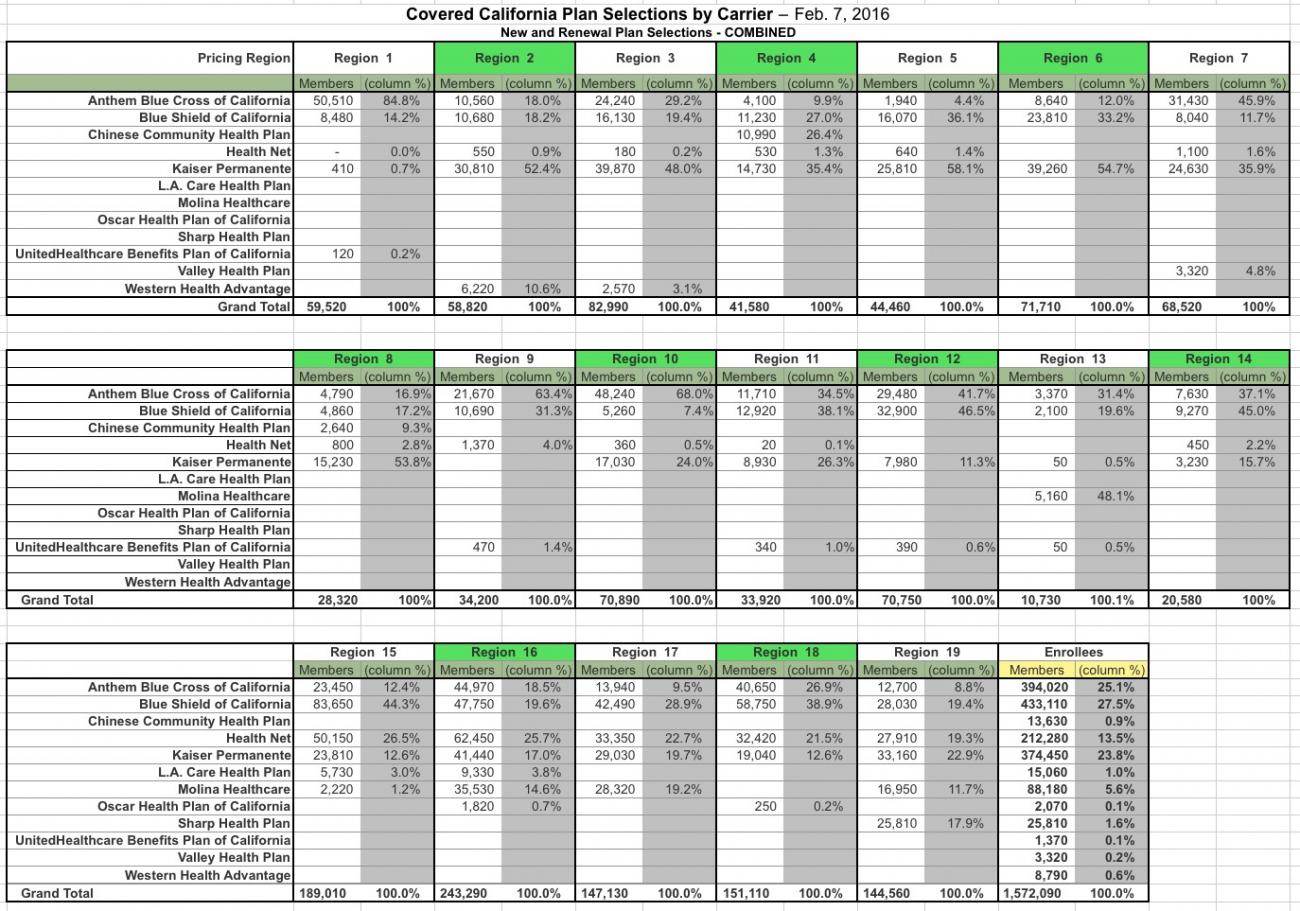