In a state implementing this option, BHP is available to consumers with incomes up to 200% of the federal poverty level (FPL) who would otherwise qualify for subsidies in the marketplace. Most are adults with incomes between 133 and 200% FPL, but some are lower-income consumers ineligible for federal Medicaid funding because of immigration status. In addition to meeting income requirements, BHP-eligible consumers must be state residents, age 64 or younger, U.S. citizens or lawfully present immigrants, and ineligible for other minimum essential coverage, including Medicaid, CHIP, and affordable insurance offered by an employer. Although any state can implement BHP, only those that also expand Medicaid are likely to do so.

BHP must be at least as comprehensive and affordable as subsidized coverage in the marketplace. BHP consumers are enrolled in “standard health plans” that cover the ten Essential Health Benefits required of QHPs in the marketplace. At state option, such plans may cover additional benefits as well. BHP premiums and out-of-pocket cost-sharing may not exceed what would have been charged by the benchmark plan (second-lowest cost silver plan) in the marketplace, taking into account premium tax credits (PTCs) and cost-sharing reductions (CSRs) for which consumers would have qualified. Standard health plans may be sponsored by state-contracting HMOs, insurers, Medicaid or CHIP managed care organizations, provider networks, or other qualified entities.

OK, so those are the basics. Again, it's sort of halfway between Medicaid and a private Qualified Health Policy, but is categorized separately from either one.

However, for various reasons, only one state (Minnesota) took the HHS up on the BHP opportunity the first two years, and even then it was mainly because their BHP, "MinnesotaCare" already existed; it was set up over 10 years ago by the state, and was approved (presumably with some minor tweaks) by HHS to qualify as a BHP under the Affordable Care Act.

This year, however, New York became the second state to implement a BHP...and the first to add one to their existing healthcare system.

Since BHPs cover people under 200% of the Federal Poverty Line, and those between 100-200% FPL make up over 60% of enrollees to date (at least on the federal exchange), it stands to reason that a good half of NY's potential QHP enrollees would be "cannibalized" by BHP coverage this year. That's why I assumed no QHP growth at all in NY this year (and even then, I probably should've assumed a drop in enrollment, given their numbers so far).

OK, so NY had 408K people sign up for QHPs last year. Let's assume 200K move to BHP coverage (again, I should've dropped my projection for the state). Fair enough. However, NY also has around 1.5 million uninsured residents, of whom around 550,000 are eligible for Medicaid, and another 190,000 are between 100-400% FPL (let's assume half of those are under 200% FPL). That's up to 650,000 more who could potentially be eligible for the new BHP, though obviously not all of them would actually sign up.

The point here is that I've been assuming that NY's BHP would likley enroll perhaps 600K - 800K people at most this year.

Which is why Appendix Table D4 of the ASPE Supplemental Report (way at the end...pages 56 & 57) made my jaw drop: 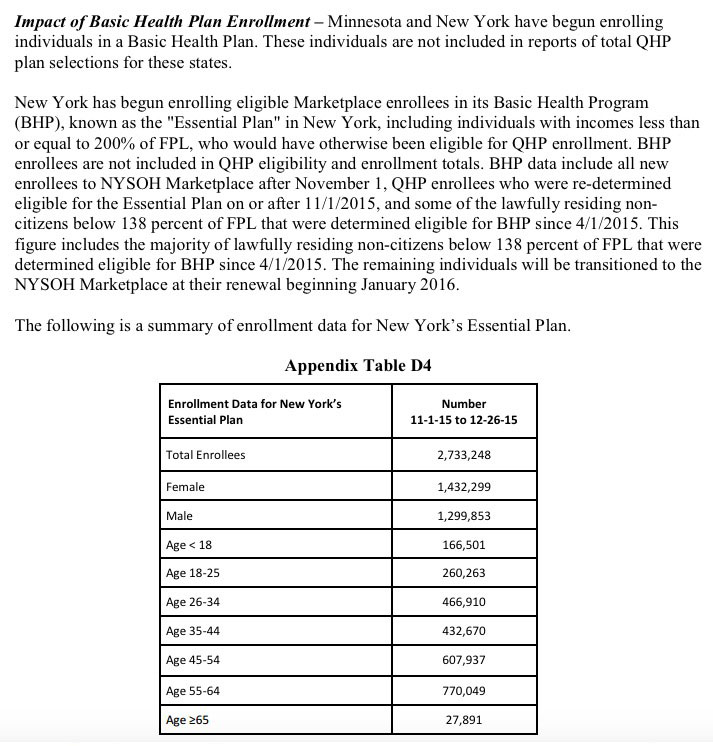 Over 2.7 million people state-wide. Now, I should note that this is not from the NY State of Health exchange, nor the NY Dept. of Insurance...but it is from the official HHS Dept. ASPE 2016 Enrollment Report, and it's pretty straightforward, so i'm inclined to think that it isn't a typo or a misunderstanding.

So, what does this mean? Has New York's uninsured rate somehow gone into negative territory? Of course not; presumably the state has not only transferred a couple hundred thousand people to BHP coverage from the ACA exchange, but also from other existing low-income healthcare programs such as Medicaid and (perhaps?) their unique "Child Health Plus" program.

I suppose this could also be some sort of big misunderstanding, but until it's straightened out, that 2.73 million figure is an eye-opener.

UPDATE: OK, this Wall St. Journal article may explain part of the mystery (h/t to Ken Kelly for the link):

Beyond Health Republic, the biggest shake-up this year is the new Essential Plan, largely for those who earn 138% to 200% of the federal poverty level. The income limit for a single person is $23,540, and for a family of four is $48,500, according to the state’s health department. The plan also serves immigrants who have legal status but don’t qualify for Medicaid. The plan has no deductible and a monthly premium of $0 or $20.

It stems from a little-known part of the Affordable Care Act, which allows states to create what the federal government calls a Basic Health Program.

New York and Minnesota are the only states with such plans, said Matthew Buettgens, a senior research analyst at the Health Policy Center of the Urban Institute, a research organization.

For New York, the plan makes fiscal sense because a state-court decision mandates that the state provide legal immigrants—some of whom don’t qualify for Medicaid—with Medicaid-like coverage, Mr. Buettgens said. The state previously covered this population with state funds and will now receive federal dollars.

An Urban Institute analysis before the plan’s creation estimated that 468,000 people would enroll in such a plan.

Hmmm...the 468K figure refers to the total number of people the Urban Institute estimated would enroll (which is even fewer than the 600K+ I figured), including legal immigrants. So, fine...the "legal immigrant" factor is probably much larger in New York than it would be in other states without such a court order.

However...just how many "legal (documented) immigrants" are there in New York who might be eligible for the program? The best I've found is this 1998 study (also from the Urban Institute), which gives the number as 1.412 million...back in 1995 (see Table A, page 3).

On the one hand, I presume that this number has grown quite a bit in the past 20 years; presumably there could be up to 2 million or so in New York today, which could account for the "extra" 2.2 million or so enrolled in NY's BHP coverage today. Presumably it's some subset of a few hundred thousand; if anyone can dig up more accurate numbers (and especially more recent numbers!) for New York's documented/"legal" immigrant population, I'd appreciate it.

Until then, the mystery continues... the other hand, I'm sure that not all of those 1.412 million (or 2 million today?) are eligible for it.

UPDATE x2: OK, Andrew Sprung has provided a much more recent and specific estimate: A 2012 study by the NYS Health Foundation which specifically estimates the total potential BHP enrollment (including documented immigrants, etc) at just 617,500 people...which is exactly what I was figuring (see page 2 and especially the pie chart on page 8):

If a Basic Health Plan is adopted, New York could build off of its existing Medicaid expansion program, Family Health Plus (FHP), to offer high-quality coverage with no co-premiums to an estimated 617,500 New Yorkers. 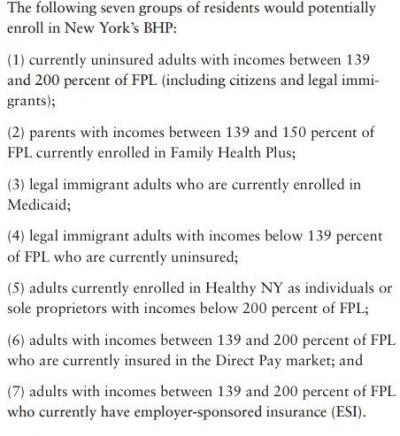 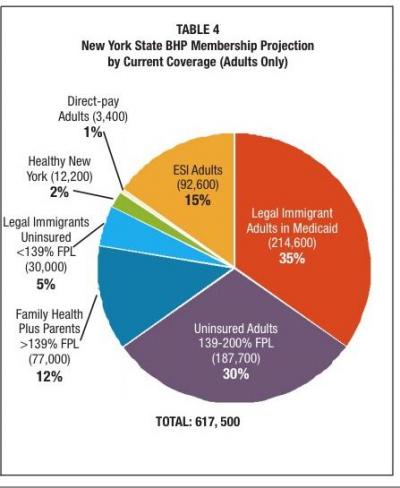 Sprung also provided the link to the Urban Institute study from 2013 where the 468K estimate came from.

...all of which still leaves the question of where the hell the other 2.1 million came from (and that assumes all 468K or 617K have signed up already, which I'm sure isn't the case).

UPDATE x3: (sigh) OK, so much for my/others theories about some sort of mass transfer of Medicaid enrollees (I noted this as a possibility above, and Richard Mayhew suggested that perhaps NY moved all Medicaid-eligible people above 138% over to the BHP en masse). However... 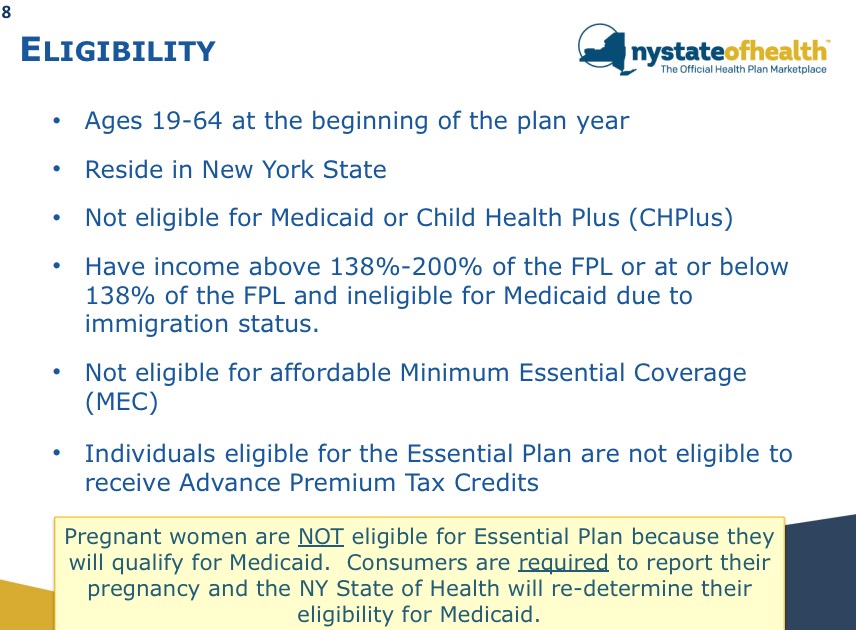 UPDATE x4: Huh. Jonathan LaMantia, healthcare reporter for Crain's New York Business, sent the source link for a story he wrote earlier this year which states that 225K documented immigrants were indeed already quietly transferred over to the BHP way back in April 2015...and estimated that about 200K who would otherwise enroll in exchange policies would likely sign up for the program. That, again, is only 425,000 people. Even allowing for miscalculations, you're still only talking about a half-million or so.

This is just...weird. There's simply no way that this many sources could have underestimated by that much (and with only 1.5 million uninsured residents in the state, and Medicaid recipients not allowed to sign up, there's not nearly that large of a pool they could come from anyway).

I'll say one thing: If this whole thing turns out to be one big typo, I'm gonna be pretty grumpy at...someone...

But seriously, it's not like the number is only mentioned in one place; the table includes both a gender and age bracket breakdown, each of which add up to over 2.7 million people (there's a slight discrepancy; presumably a few people didn't list their age or gender for whatever reason).

UPDATE x5: Wow. Even Larry Levitt of the Kaiser Family Foundation is stumped:

(sigh) Sure enough, when I clear my browser cache and reload the Addendum Report... 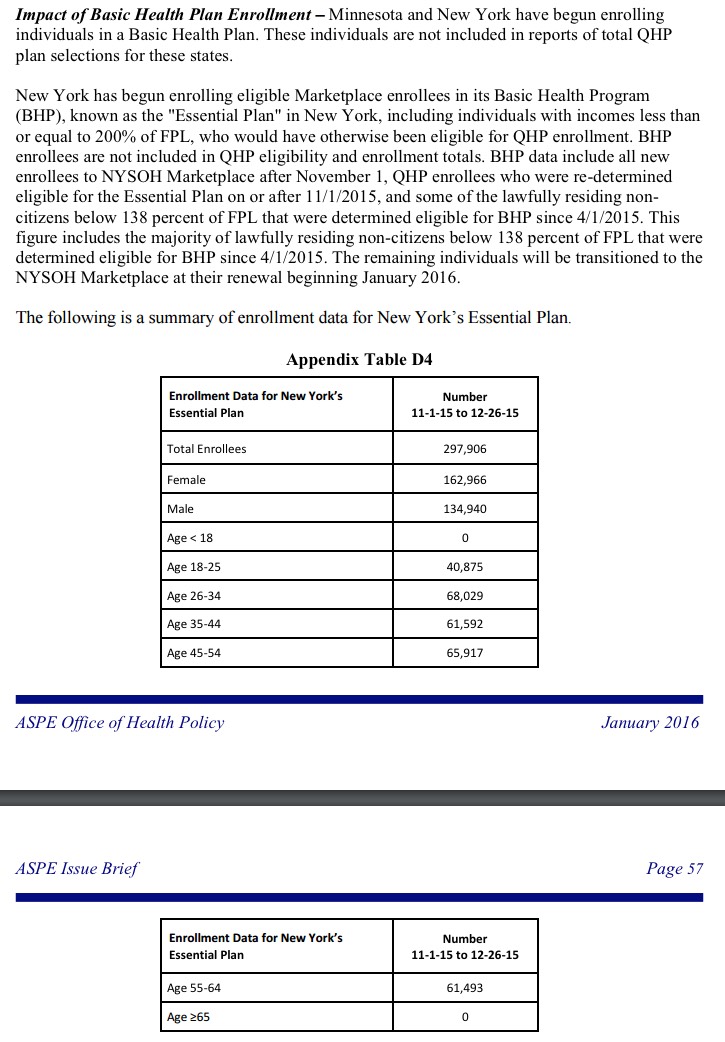 So, what happened? Well, Ms. Sandoe's call to "refresh my browser" to view the updated version wasn't quite the problem; instead, the irony here is that I had downloaded the original version of the supplemental report and uploaded it to my server specifically because at some point last year, the HHS Dept. restructured/reorganized their websites causing many of my links to their reports to be broken; I wanted to make sure I had a locally-archived version. Sometime between around 2pm Thursday afternoon and 11am Friday morning, someone at HHS discovered the error, corrected it and swapped out the old PDF for the new one. Unfortunately, since I had already uploaded the earlier version, I didn't know about the correction, and presumably the others who I engaged in a furious discussion with yesterday were also looking at the mistaken version on my server instead of the corrected version on HHS's.

For the record, here's the full list of people who were involved (or inadvertantly sucked into) in a furious back-and-forth debate/discussion about the Mystery which Wasn't:

In addition, I owe an apology to the following people/organizations for inadvertantly sucking them into this silliness:

And a huge THANK YOU to Emma Sandoe for providing the answer.

ANYWAY...in order to try and salvage some sort of useful information from this huge waste of time, I should note that assuming that Mr. LaMantia's 225K documented immigrant figure is accurate, that means that only around 73,000 other NY residents have signed up for BHP coverage so far...all of whom would presumably otherwise have enrolled in QHPs via the exchange, bringing that total up to 339,000 instead of 266,000 as of 12/26.

In other words, so far, NY's BHP system has "cannibalized" about 22% of the exchange's QHP population.