UPDATED: How many HC.gov auto-renewals are left, and is it time to adjust my OE3 projection?

Several people have recently asked me whether I plan on adjusting my official projection of 14.7 million QHP selections (nationally) as of the end of the 2016 Open Enrollment Period.

On the one hand, the total numbers to date sound pretty impressive, and over 20 states are running well ahead of my projections so far (Massachusetts & Maryland have already hit my targets; SD, UT, RI, MT & TN are close behind). On the other hand, I'm also starting to see some worrying signs in a few large states, particularly Texas, Illinois, New Jersey and Pennsylvania.

Here's an irony for you: Take a look at what the state-by-state chart looks like when you divide it into the states which are currently above where I expected them to be right now and those which are behind (remember, 5 states aren't listed at all, since they haven't provided any data at all or only very limited in the case of California): 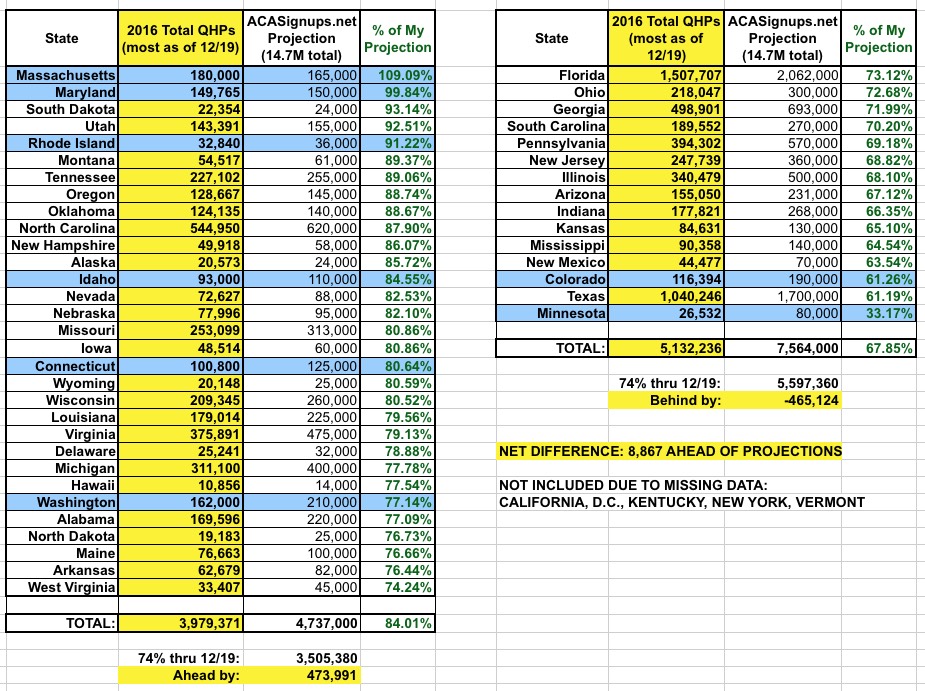 Anyway, my response about adjusting my final projection has always been that I'll be taking a hard look at this after the auto-renewals have been added into the mix.

The good news is that in yesterday's Week Seven Snapshot Report, CMS did indeed finally add auto-renewals to the HC.gov total. The bad news is that I was expecting anywhere between 2.4 million - 3.2 million auto-renewals via the federal exchange, but they only added about 2.28 million of them, below the low end of my range.

HOWEVER, they also threw in a twist: There are still some auto-renewals left to be added! (Remember, none of this has anything to do with the 13 state-based exchanges, which I'll get to later):

This opens up a potentially huge, unexpected unknown. Until now, The Graph assumed that all auto-renewals (with the exception of a handful of the state-based exchanges which have January deadlines later than 12/17) would already be included in the official total as of 12/19, like they were last year. That's why it looks like this at the moment: 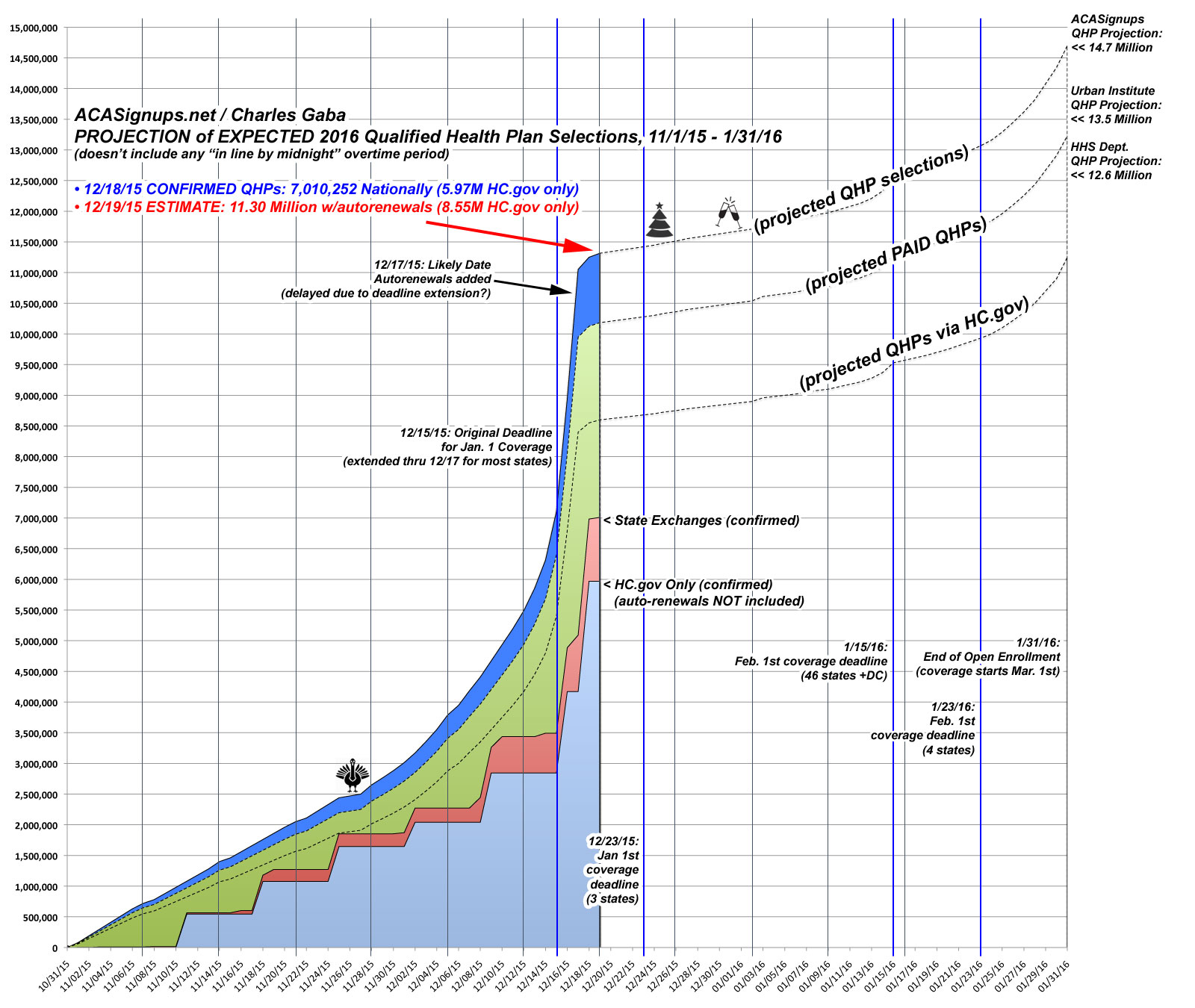 On the one hand, according to the Q3 Effectuated Enrollment Report, there were 9.31 million effectuated QHPs nationally as of 9/30/15, of which 6.69 million were via the federal exchange (71.9% of the total). This is lower than the 76.3% of QHP selections as of the 2015 open enrollment period, which is part of what threw me off in my assumptions last week.

However, the 9/30/15 number isn't what's relevant here; what we need to know is the December number. For that, HHS is still quite insistent that it'll end up being 9.1 million. While I was more optimistic earlier this year (I assumed it'd still be close to 9.7 million nationally as of now), it's pretty obvious that the attrition rate has indeed been higher than I figured, so I'll go with their 9.1 million.

If so, and assuming the federal-to-SBM ratio has remained the same, that suggests that as of December, HC.gov states are down to 6.54 million people as of today.

We also know that about 5.86 million people have already re-enrolled (either actively or passively) via HC.gov (71% of 8.25 million).

That means that there are potentially up to 680,000 more people left to be auto-renewed via the federal exchange.

Now, if that's what ends up happening, the HC.gov total will jump to more than 8.9 million in the Week Eight snapshot, and I'll be pretty comfortable keeping things where they are for the final leg of OE3.

HOWEVER, there's one thing which bothers me about this: "VAST MAJORITY". The Week Seven report specifically states that "the vast majority" of auto-renewals have already been added.

It's because of this that I'm being very cautious with my Week Eight projection: I'm assuming about 150K remaining auto-renewals (6% left), plus another 100K or so new enrollees, for a total of 250K for the week.

The other major unknown, again, is the missing renewal data from California (they've reported 197K new additions, but haven't said a peep about re-enrollees...and that number could be up to 1.3 million, so it's kind of important), as well as the lack of any numbers at all from New York, Kentucky, DC and Vermont, which should collectively add up to somewhere in the 400K range.

Unfortunately, due to these two factors, I'm going to have to hold off one more week before making any adjustments (up or down) to the final 14.7M figure. A range of anywhere from 1 - 680K is just too big of a missing factor.

In the meantime, assuming my 250K Week 8 ends up being accurate, here's what The Graph should look like instead: 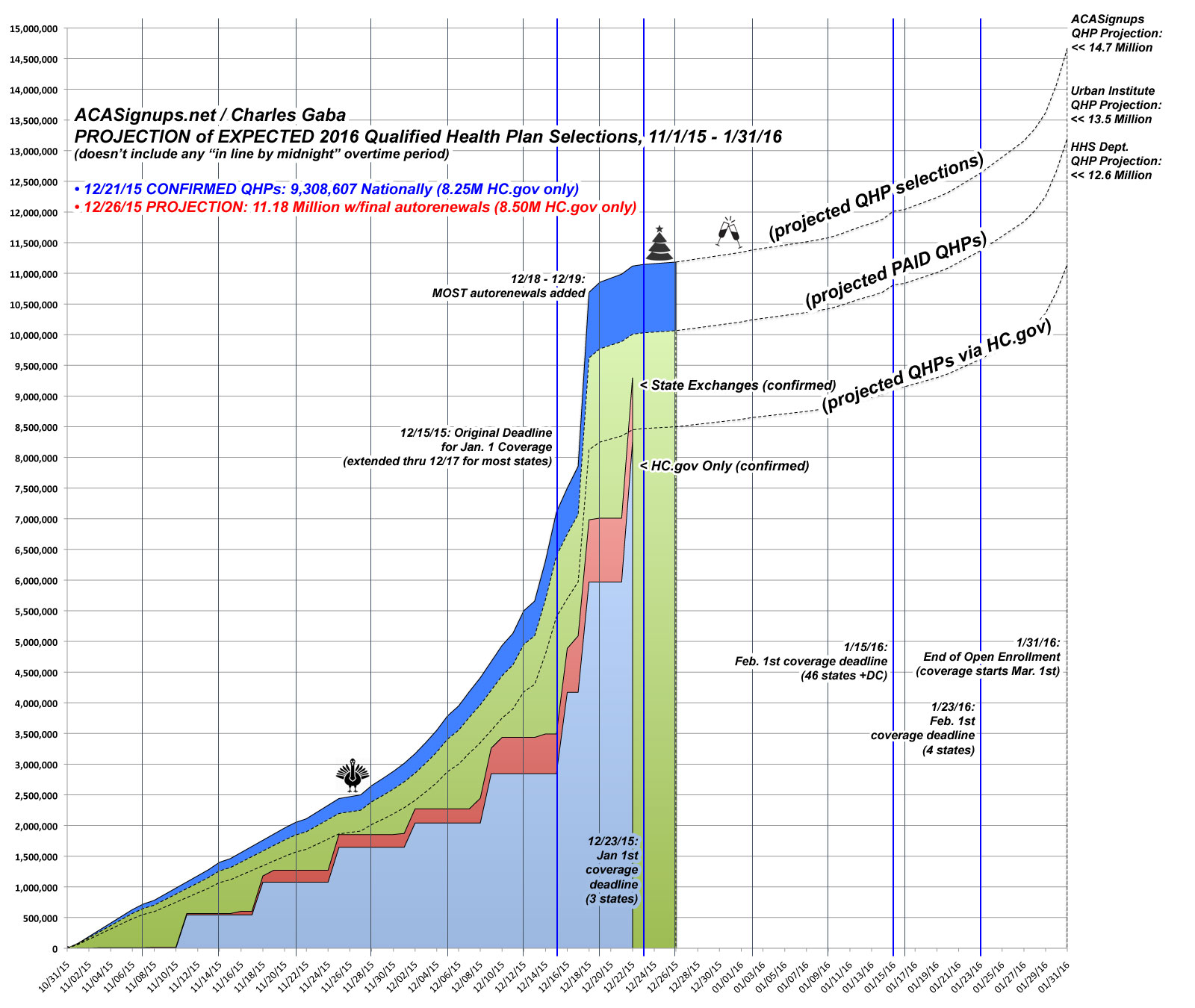 UPDATE 12/28/15: In response to a comment on a different thread, I posted the following:

20% growth by 1/31 would be just over 14.0 million even. Again, I'm holding out for the Week 8 numbers before making any adjustments.

In other words, as I noted back on 11/13, just because the numbers have been running ahead of last year so far, that guarantees nothing going forward. I could prove to be dead-on accurate for the first 12 weeks...but if I'm way off in the final "surge" week, that could still lop off up to 1 million from the grand total.

Again, I'm not saying this will be the case, I'm just putting it out there as a possibility for the moment. In any event.