Out of all of the 2,500+ blog entries I've posted over the past 2+ years here, the one I'm most proud of was "A Response to Avik Roy", from March 25, 2014 (written right in the thick of the crazy, frenzied final week countdown of the first ACA Open Enrollment Period). This was when the site was at its highest traffic level and I was at my highest point of media attention. I was doing nothing but updating the site for about 16 hours per day, interrupted only by eating, sleeping and being interviewed by every outlet under the sun. Needless to say, I was frazzled, exhausted and short-tempered, and in fact I ended up falling victim to a nasty case of shingles as a result immediately after the close of the April 15th "Overtime Period" a couple of weeks later.

The gist of the spat with Roy was this: He kept insisting that only 27% of those who had enrolled in private ACA exchange policies were newly insured. He based this claim on a study by the McKinsey Center for U.S. Health System Reform.

Now, it's true that the McKinsey study did claim that:

HOWEVER, as I explained in vivid detail, this in and of itself was nearly meaningless for four reasons:

At the time, I stated that my own off-the-cuff guess was that it would turn out to be perhaps 50/50...that is, that around half of the first-year ACA exchange enrollees would be newly-insured, the other half would be "switchers" such as my own family (we moved from an off-exchange BCBSMI policy to the closest on-exchange equivalent plan they offered). Roy actually had the chutzpah to accuse me of "cherry picking" when he was the one doing so.

As it turned out, in the end, not only was I correct, it was even higher than I had thought: A Kaiser Family Foundation survey found that 57% of ACA exchange-specific QHP enrollees were newly insured. A similar survey earlier this year by the Commonwealth Fund pegged it at 53% (lower percentage, but out of a higher raw number).

So, yay me, right? Roy never apologized or admitted that he had been wrong, of course, but whatever.

OK, so why am I dredging all of this up again today?

Because Roy is at it again:

The level of disingenuousness here is staggering.

This last point is the one which really made my jaw drop.

Furthermore, Roy is being too cute by half here by dividing the reduction in the uninsured by the total population instead of by the number of people who were uninsured to begin with. If you divide 14 million by 42 million uninsured, that's a 33% reduction. Roy didn't like that, so he used the full 320 million U.S. population...even though over 40% of them are also enrolled in socialized healthcare programs (about 50 million in Medicare, 72 million in Medicaid, over 9 million in the VA and so on).

Using the full 320 million figure is stupid for other reasons as well. For one thing, there are about 4.8 million uninsured undocumented immigrants who aren't legally allowed to be covered by any ACA provisions. Add these to the 3.1 million caught in the Medicaid gap and that's nearly 8 million people who can't get covered by the ACA no matter what (about 2.5% of the total population). The same holds true, for the most part, for U.S. territories such as Puerto Rico, Guam, etc. Add these up and that's another 4 million people who can't be considered in such a calculation.

In many ways, dividing into the full 320 million figure is as laughable as FOX News trying to claim that "94 million people aren't participating in the work force"...when well over half of those are either retirees or students.

However, even accepting the 2% figure, trying to use the recession as an excuse to push back a couple extra years is astonishingly obtuse.

Yes, the Great Recession, which officially started in December 2007 and ran through June 2009. As you may recall, President Obama didn't take office until January 2009 and his stimulus bill to clean up President Bush's mess didn't start taking effect until several months later...by an amazing coincidence, right around the point that the recession officially ended and the recovery began.

Seeing how healthcare spending makes up over 16% of the U.S. economy, I don't suppose it's dawned on Mr. Roy that the ACA itself might very well be a large part of the REASON for the economic recovery since 2008??

Here's the best metaphor I can think of: Let's suppose you were a long-distance runner until 2007. In 2008 you were in an industrial accident in which your leg had to be amputated. Then, in 2010, you were fitted with a new type of prosthetic leg.

Let's suppose that after several years of physical therapy you were back to long-distance running, with your prosthetic leg...and after clocking yourself, discovered that you were "only" 2% faster with the artificial leg than you were before your accident.

Would you be upset about that? Somehow I don't think so.

Or perhaps you were a champion cherry-picker before losing your arm...

UPDATE: Just to clarify: Whenever I run an "uninsured rate drop" estimate, I sometimes use a March 2010 start date and sometimes an October 2013 start date. However, I do this because both starting dates are important for different reasons; the first is when the ACA was signed into law, the second is the point when the two provisions which make up, by far, virtually all of the net coverage gains were kicked off (ACA exchanges with APTC/CSR and Medicaid expansion in most states).

I also always make sure to clearly mark both dates in graphs detailing the change over time: 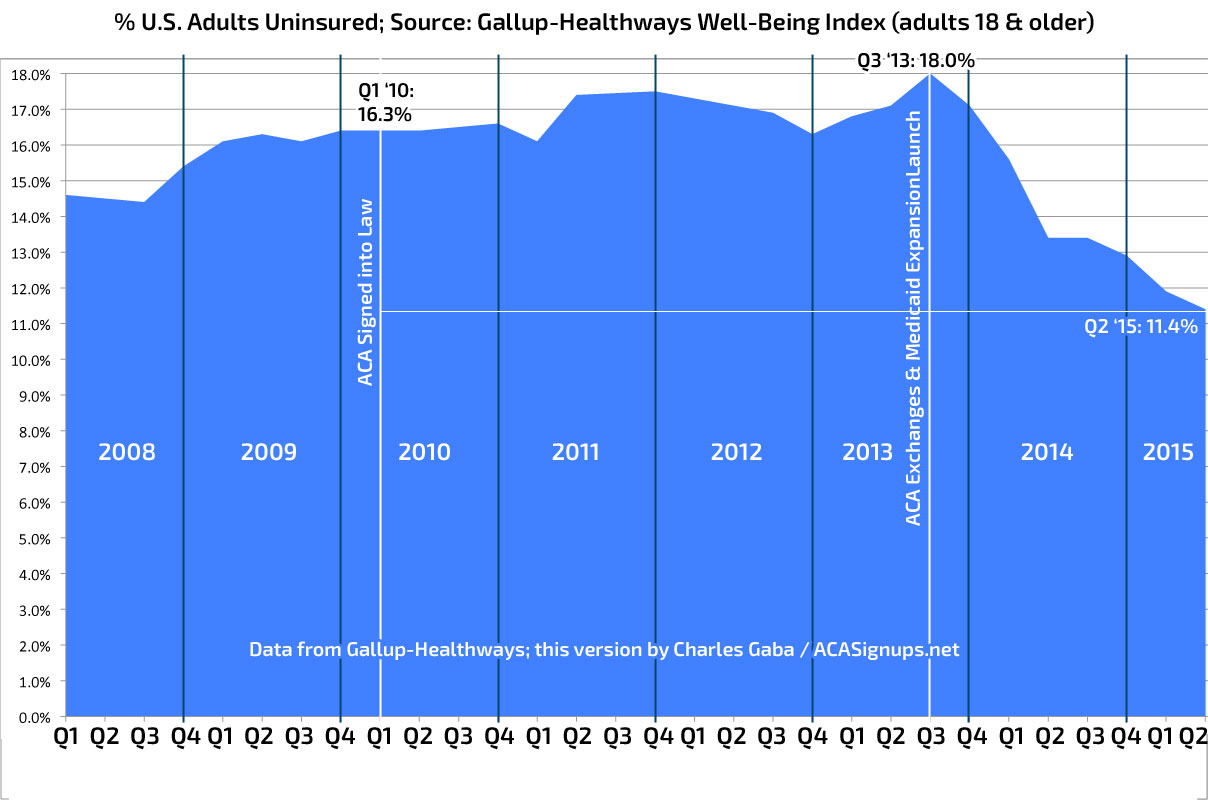 UPDATE x2: Thanks to Ken Kelly for pointing me towards the source of Roy's "6.7 million since 2008" claim (which, as I said, I wasn't disputing, I was just surprised that Roy didn't bother linking to it himself seeing how it's the lynchpin for his entire argument, even if the argument is still flawed in a dozen other ways anyway): 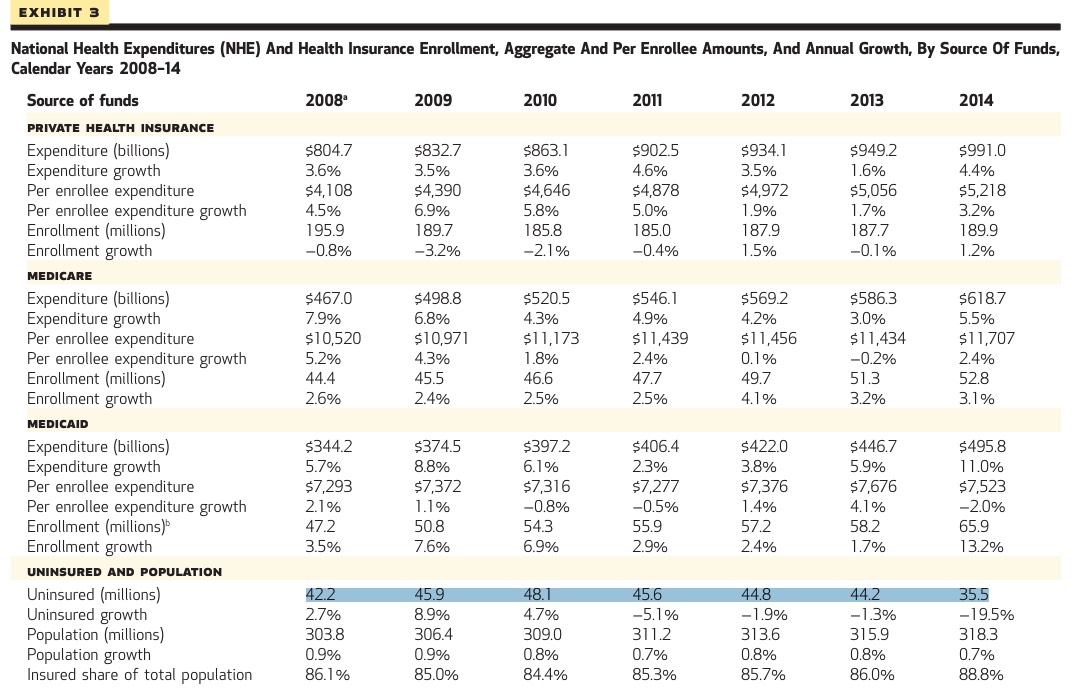 As you can see, even Roy's own source states quite clearly that the uninsured rate dropped by 5.1% in 2011, another 1.9% in 2012, another 1.3% in 2013 and a whopping 19.5% in 2014. The major ACA-related change in 2011 was the "sub26er" provision (allowing 19-26 year olds to say on their parent's plans). There weren't any significant provisions (at least ones which were connected directly to number of people covered) which kicked in during 2012 or 2013, however. Then came 2014, when both the exchanges (with tax credits and cost sharing reduction assistance) and Medicaid expansion kicked into gear...and whaddya know?

Kelly also points out another factor I hadn't even thought to mention: Population growth. Estimates vary by source, of course, but Roy's own source gives it as 303.8 million in 2008, 309.0 million in 2010 and 318.3 million in 2014. That means that even using 2008 as a baseline, as Roy insists upon doing, there were an extra 14.5 million people (or 4.8% more people, depending on how you look at it) in the country who had to be accounted for, which of course he doesn't do.

One other thing: The second half is all about the rate of healthcare spending growth. You'll notice that I'm not even bothering to go into this part of his article, and everything above is why. The sad part about this is that there is a legitimate debate to be had about whether both the expense of the ACA as well as the disruption it's brought to the U.S. healthcare industry is worth all the fuss and bother in order to "only" cover an additional (14 - 17 million people, give or take), along with the other requirements of the law (no more denials for pre-existing conditions; minimum basic coverage; etc). If Roy had approached the first half of his article honestly ("Uninsured has dropped by 15 million or so...is it worth it?"), then I might be able to take the second half of it more seriously, but by exaggerating so blatantly about the coverage numbers and percentages, he lost any credibility he might otherwise have had for the rest of it.