Sometime this week I'm expecting CMS to release a 2015 Q3 Effectuated QHP report showing how many people were still enrolled in (and paying for) ACA exchange policies as of September 30, 2015.

Now, the HHS Dept. has been projecting the December 2015 effectuated exchange QHP number as being down to about 9.1 million for quite some time now, and has stuck with that proejction through thick and thin all year. I, on the other hand, have been more optimistic, assuming that net attrition since June has been far less dramatic, to perhaps 9.7 million by now.

However, over the past couple of months I've received conflicting data from 8 of the state exchanges versus 8 of the largest insurance carriers. The exchanges (representing 8% of total enrollments) seem to indicate a net increase in QHP enrollments since June (or, at worst, a nominal drop), while the carriers representing about 40% of total enrollments suggest that the number had already dropped to about 9.2 million as of the end of September.

Given that the carriers represent 5x as many people as the exchanges I have data for, I'm inclined to at least split the difference and assume that the September total had dropped to at least 9.4 million. If so, that would further suggest that yes, it could be down to around 9.1 million (or even lower?) by now, just as HHS has been saying.

However...the state exchanges continue to throw a monkey wrench into this reasoning: 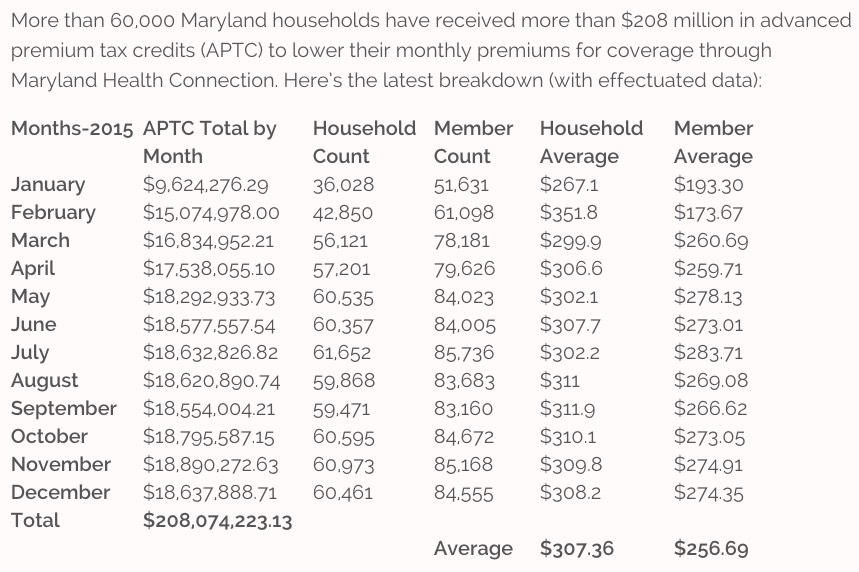 Yup, the December number is, once again, slightly higher than it was in June.

Now, this isn't quite accurate, because the roughly 30% of Marylanders who aren't receiving APTC assistance aren't included here. It's conceivable that those paying full price have dropped off, more than cancelling out the net gains in APTC enrollees.

Still, as noted in my earlier link, Maryland's total effectuated enrollment number was slightly (very slightly...less than 0.1%) higher in September than it was in June.

It's safe to assume, therefore, that Maryland, at least, is ending the year at almost exactly the same point they were at in June. Extrapolated nationally, that would suggest around 9.9 million.