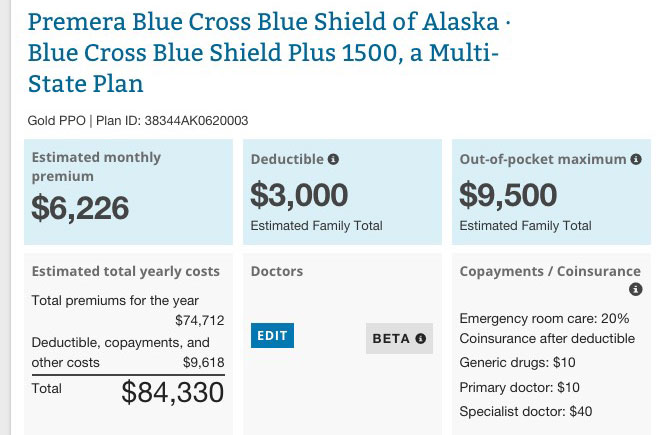 Of course, there are a few caveats, which I'm sure you guys will be certain to include when you report on this:

Yup, when you plug all of that into the official HealthCare.Gov window shopping tool, you do indeed come up with a Premara Blue Cross Blue Shield Multi-State Plan with a $5,924/month premium and a $3,000 deductible. Thank goodness for that $9,500 Out Of Pocket Maximum, or they might be looking at some real sticker shock!!

UPDATE: OK, I posted this as an absurd, tongue-in-cheek theoretical piece. The vast majority of people will never be faced with a situation nearly as extreme as the scenario above. However, the reality is, as "farmbellpsu" has pointed out in the comments, the cost for those making more than 400% of the Federal Poverty Line (and really, for those above 300%) is a major problem for some people, such as the couple profiled in this article out of, yes, Alaska:

Polly Hess got a letter last month from her health insurance company saying that the premium for her and her husband’s health insurance plan would increase next year by more than 30 percent -- from $1,648 to about $2,500 a month.

The letter from Moda Health went on to tell Hess that if she was OK with the hike, she didn't have to do anything else, recalled Hess, who lives in Homer and owns a small business with her husband.

...Hess, 60, and her husband own Puffin Electric, an electrical contracting company. They earn more than $79,600 a year -- the cutoff for a family of two to get a federal subsidy toward a monthly premium on the online health insurance marketplace set up by President Barack Obama’s signature health care law.

I plugged the Hess' basic info into the HealthCare.Gov window shopping tool out of curiosity. I don't know their zip code, so used the one for Puffin Electric. I also don't know how old her husband is; I assumed 61.

In fact, all snark aside, I also plugged in the same stats assuming that Mr & Mrs. Hess did have two 17-year old children (although I didn't make anyone in the family smokers or pregnant). A 60-year old woman with 17-year old children, while rare, is at least common enough to be within the realm of reason.

Results? The least-expensive plan in that scenario would also be the Moda Bronze plan at $3,078/month and an $11,500 deductible. The most expensive would come in at $5,481/month and a $3,000 deductbile, but that would also be multi-state.

The Hess couple falls into a group of several thousand Alaskans who buy insurance on the individual market and who will see their premiums increase in 2016 at one of the highest rates in the country, according to the Kaiser Family Foundation. Alaska already had the country's most expensive premium costs this year, Kaiser reported.

...Most Alaskans enrolling in plans on the individual market won’t pay the high premiums. That’s because those who make between one and four times the federal poverty level can get subsidies, which have kept pace with premium increases.

But others, like Hess, who earn too much for a subsidy have seen their premiums go up year after year without sign of reprieve.

...Between the start of January and the end of September of this year, Coon said, 37 Premera members enrolled in individual health insurance plans generated $17.5 million in medical bills. In total, Premera had about 7,400 members during that time in the individual market with $68.3 million in claims.

The article explains that most of the problem is due to the unique nature of Alaska's tiny individual market risk pool, which isn't an issue in most states. For instance, a 60 & 61-year old couple, no kids, non-smokers here in Michigan would be looking at several basic Bronze HMO plans starting at around $800/month, maxing out at a top-of-the-line Platinum PPO for $2,400/month...but with Dental and Vision included.

Still, that's small comfort to folks like the Hess'. In the meantime, there's apparently a legislative fix in the works which sounds awfully familiar to me:

Coon said Premera is working with Moda and other stakeholders to craft legislation for the upcoming legislative session. The bill in the works would spread the costs of high medical bills across the state’s entire insurance population instead of only across those enrolled in the individual marketplace, she said.

“By spreading the high-cost claims among a larger pool, individual market rates are expected to stabilize without significant swings year over year,” she said. “Employer groups would experience an increase in their premiums, through the high-risk pool assessment, but how much depends on how the program is implemented.”

She said the goal is to strike a balance that gives those in the individual market some relief.

If I'm reading this correctly, it sounds like they're basically talking about merging the individual, small group and large group risk pools into a single risk pool. This is not unheard of; Massachusetts has already done a smaller version of this by merging the individual and small group pools together. If they can pull it off, it sounds to me like it would actually be one more step towards...dare I say it...single payer healthcare?

After all, what is single payer other than combining everyone into one gigantic risk pool, then spreading the coverage costs out among the entire population?

The major difference here is that the payments would still be done via private enrollments rather than through taxes, but still...